Above: Miners work at Magadh coal mine in Chatra district in Jharkhand (file pic)/Photo: UNI

Hasdeo Arand is one of central India’s last biodiversity rich forests that is home to elephants. It also acts as a wildlife corridor. The region has a coal seam running under the hills spread over 1,70,000 hectares of rich tropical forests. When the thermal power policies were revised in the new millennium to meet India’s rising power needs, it was decided that state electricity boards, then the major power producers, would be given the deposits.

States like Delhi and Rajasthan which did not have any coal resources were allotted captive coal blocks in Chhattisgarh, Jharkhand and Bihar on a revenue/power sharing basis. But later, the private players jumped into the thermal power business in a big way around 2001-02 and ultra mega power projects were identified and signed. These power projects were given to big players like Reliance and Tata.

Eventually, the state governments got wise and floated their own mega projects of 600-2,000 MW for which they also reserved some of the identified coal blocks.

For those willing to take the risk, power projects were the next big thing—subsidised land, assured water and captive mines, and in most cases, an established infrastructure network. The players had to generate power and sell it to state electricity boards at rates determined by tariff commissions and usually agreed to by state governments.

Things ran smoothly for a while for the mining industry till the noise over environment damage reached a crescendo by 2010. That year, the environment ministry under UPA II classified nine “no-go” areas for mining and rejected proposals seeking clearance to open and operate coal mines.

The Hasdeo Arand region had 30 coal blocks, and despite all of them being included in the “no-go” areas, the then environment minister, Jairam Ramesh, overruled an expert committee and gave clearance to mining in three blocks, which he claimed would be “the first and the last”.

Two of the blocks, Parsa East and Kanta Basan, which received environmental clearances, had been allocated by the coal ministry in 2007 to the Rajasthan Vidyut Utpadan Nigam Limited, the state’s power generation company. However, private players entered through the back door—as mine operator or Mine Developer and Operator (MDO). The state electricity boards formed joint ventures with private players—in this case Adani—to operate mines and supply them with coal at a predetermined cost and quantity. Adani Mining holds a 74 percent stake in the joint venture company with Rajasthan Vidyut Utpadan Nigam Limited for these blocks.

Strangely, this shareholding pattern has remained intact even after the Supreme Court judgment in 2014 cancelled all coal block allocations—including those allocated to public sector firms—and the centre passed a law in 2015 that restricted private ownership in such joint ventures to 26 percent. Adani has bagged mining contracts for four of the 30 coal blocks in the region.

The coal ministry had originally allotted these coal blocks to state government-owned electricity companies for captive use, which meant they could mine the coal strictly for consumption in their own power units. Apart from Parsa East and Kanta Basan, two other blocks—Parsa and Kente Extension—were freshly allotted in 2015 to Rajasthan Vidyut Utpadan Nigam Limited. A third block in the adjacent Gare Palma coalfields—Gare Palma III—was allotted to Chhattisgarh State Power Generation Company Limited.

The state electricity companies, however, had signed up the Adani Group as mine developer and operator to start and run the mines and supply coal to them at predetermined prices. These contracts are not available in the public domain and not accessible under the Right to Information Act. Therefore, it is no wonder that experts have expressed concerns over private companies being favoured over public interest.

Stage II mining permissions in Parsa Block were given to Adani on February 21 as the date for the announcement of the model code of conduct for the Lok Sabha polls was nearing. It had already been given the first stage of clearance on February 16 and five days later came the stage II clearance. It is not yet clear whether the gram sabha has given its consent to mine the 841-hectare Parsa Block. 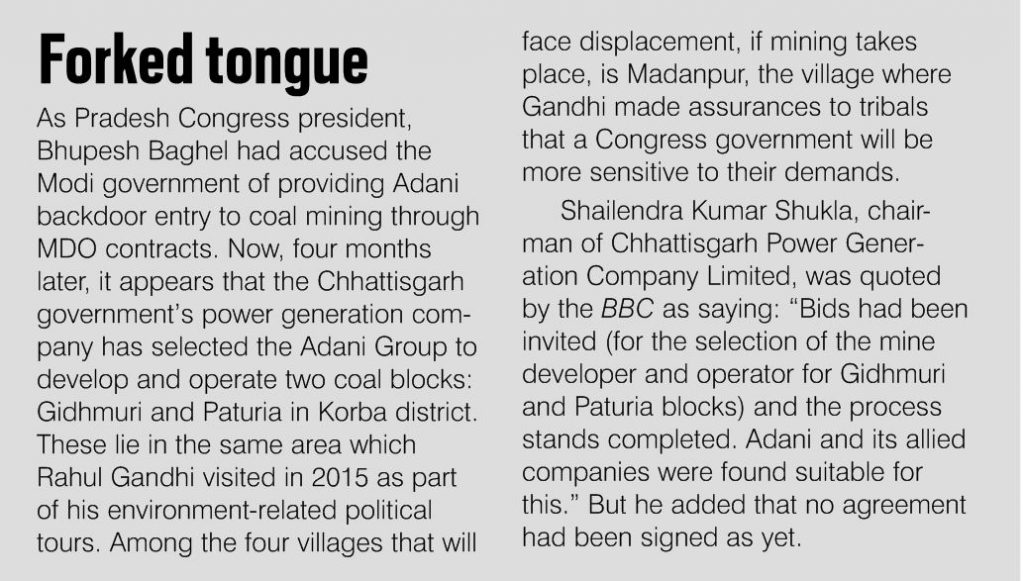 The Environment Assessment Committee (EAC) had examined the case three times last year. In its meeting on February 15, 2018, the EAC had raised two important issues. One, it had asked the state government to furnish details of how mining will impact the local tribal population, and two, whether all permissions from the gram sabha had been obtained as required under the Forest Conservation Act. At the same time, it also asked the state wildlife warden to provide details about elephant corridor in the area.

In two other meetings in July 2018, and September 2018, the Chhattisgarh government under pressure, as the assembly elections were round the corner, provided details of wildlife corridors and the impact of mining on tribal life. But the EAC was still silent on the consent of the gram sabha. It seems that Adani was quickly granted the final clearance for mining Parsa Block which has an estimated capacity of five million metric tonnes of coal annually.

There are other issues regarding Adani becoming the MDO. Activist Sudeep Shrivastava of Bilaspur has already filed a case in the Supreme Court to annul the agreement between Rajasthan Vidyut Utpadan Nigam Limited and Adani. There is also a legal view that the permission given in the past to open Parsa East and Kanta Basan blocks was on the basis of an understanding that the Parsa Main Block in the Hasdeo Arand area will not be open to mining. But Adani pressure seems to be working otherwise.

Now all that remains for the Adani Group to start mining in the area is a final clearance by the forest department which usually follows the Stage I and II clearances. There is, of course, the small matter of the gram sabha consent being forged. But for now, it appears that only the Supreme Court can stand in the way of one of India’s richest forests falling prey to private greed.