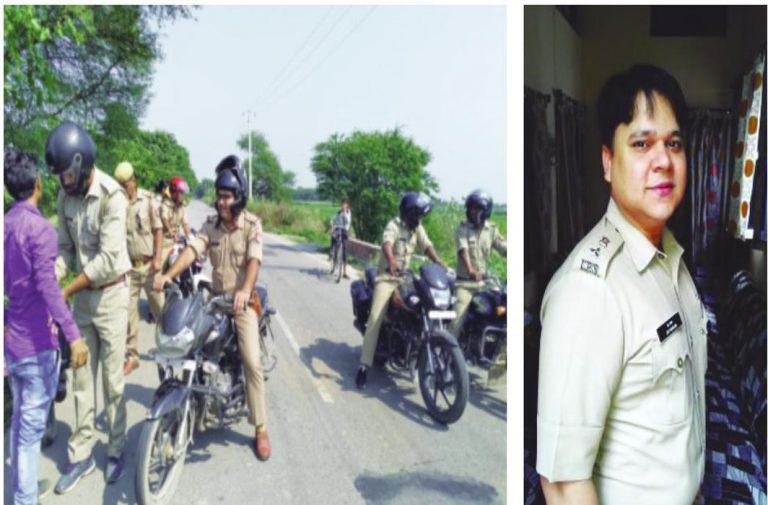 Above: Dev Ranjan Verma, SP, Balrampur (above), feels that his team in the district (left) is delivering better and showing more confidence after it began learning English/Photo: twitter.com

In view of the unending English versus Hindi debate in the country, a UP police officer’s initiative to make his subordinates conversant with English has created murmurs in the Hindi heartland. Whenever this issue has cropped up, it has chiefly been a North versus South divide and governments have been forced to step back. But not so in the present context.

In June this year, the Union HRD ministry’s draft National Education Policy’s three-language formula raised the hackles of Opposition parties who saw it as a move to impose Hindi on non-Hindi speaking states. The proposal sought to make Hindi a compulsory third language in schools. The initial draft policy said, “…the study of languages by students in the non-Hindi speaking states would include the regional language, Hindi and English”. After the outcry against it, the policy was revised to read: “Students who wish to change one of the three languages they are studying may do so in Grade 6, or Grade 7…”

The Learn English campaign of the police officer comes close on the heels of BJP national president Amit Shah sparking a controversy with his “one nation, one language” remark in favour of Hindi. A 2011-batch IPS officer, Dev Ranjan Verma, who is superintendent of police in UP’s Balrampur district, has asked policemen in his district to brush up their English, start reading English newspapers and also submit applications in English.

Fortunately for Verma, barring some criticism in vernacular newspapers, there has been no outcry against his order which was issued after a series of classes and workshops organised at the district headquarters, some police stations and Police Lines over one week. Verma not just issued the order but also acted as facilitator/teacher. He provided them with Oxford dictionaries and subscribed to 150 copies of a national English newspaper at Police Lines which are supposed to be part of the policemen’s daily read. The constabulary, which was given the standard exercise of learning the meaning of difficult words each day, started submitting their applications in English to the SP.

Verma has been quoted as saying that “little or no knowledge of English has often landed us in trouble as inspectors and sub-inspectors are unable to comprehend Supreme Court and High Court orders, leading to flawed execution”. In Verma’s assessment, his team was “delivering better” and has “become more confident compared to their contemporaries in other districts” after they began learning English.

According to DIG (Devipatan), Rakesh Singh, under whose police jurisdiction the Balrampur district comes, no such instructions had been issued from the top. “Whether the use of English is important or not is a policy decision. The Police Recruitment Board, the DGP and others assess what skills our personnel need,” Singh said.

Verma is of the view that policemen need to have a basic working knowledge of English as all cyber crime and surveillance information is in English. The DGP and the Police Recruitment Board may not concur with the IPS officer’s decision but, in a different context, it is in sync with Yogi Adityanath’s outlook on languages. The chief minister has no antipathy towards a foreign language. This was reflected in the BJP government’s education policy which is aimed at revamping the state’s education system.

A series of decisions was taken by the chief minister in a meeting with the department officials in April 2017. One important decision was that the government will make efforts to ensure that students learn at least one foreign language. This was taken to help students seeking admissions in foreign universities. It was aimed at students of Class 11 and 12 who, when they go abroad to study, spend the first three-four months learning the language. Knowing a foreign language, the government believed, would also enable students to land jobs in the tourism and corporate sectors. If the chief minister of the state encourages the teaching of a foreign language, learning English to add to policemen’s competency can hardly be discouraged.

To begin with, in 2018, 50 government schools in seven districts—Lucknow, Gorakhpur, Varanasi, Agra, Allahabad, Ghaziabad and Mathura—were identified where one foreign language was to be taught to students of Classes 9 and 10. Teachers hired for the language course were to be paid an honorarium of Rs 10,000 per month for a three-month basic course. The courses are designed to teach the students how to read, write and speak. Initially, the students were to be taught in batches of 25 and smart classes were also proposed for them.

Uttar Pradesh was earlier caught in a bitter discussion over English when Mulayam Singh Yadav of the Samajwadi Party, infamous for his anti-English stance, promised in his 2009 poll manifesto to do away with English in the state. The manifesto promised to “abolish expensive English medium schools, stop the use of English in administration and in courts, as well as to do away with computers wherever their functions could be carried out manually”.

In 2013, he demanded that English be banned as a language of discourse in Parliament. His tirade against English actually began way back in 1990 when he was chief minister of Uttar Pradesh. He railed against English even as his sons, Akhilesh and Prateek, went to English-medium schools. Akhilesh also went to Australia for higher studies. Later as chief minister, Akhilesh distributed laptops to bright students. Despite Mulayam’s strong views against English, he did nothing to curb the use of the Queen’s language in the state, indicating that it was all done to grab attention.

When Amit Shah said that “it was essential for India to have one language” and it is “Hindi that would unite the country given that it was the country’s most spoken language” on Hindi Diwas early this month, superstar Rajinikanth and Kamal Hassan stated that Hindi should not be imposed. “Not just Tamil Nadu, southern states will not accept Hindi imposition,” Rajinikanth said.

Other southern states also vocally protested against the imposition of Hindi as the national language. So strong was the opposition that Shah had to issue a clarification. “I never asked for imposing Hindi over other regional languages and had requested for only learning Hindi as second language after one’s mother tongue. I myself come from a non-Hindi state of Gujarat. If some people want to do politics, it’s their choice,” he said. Fortunately for Verma, protests against his move, if any, have been largely muted.