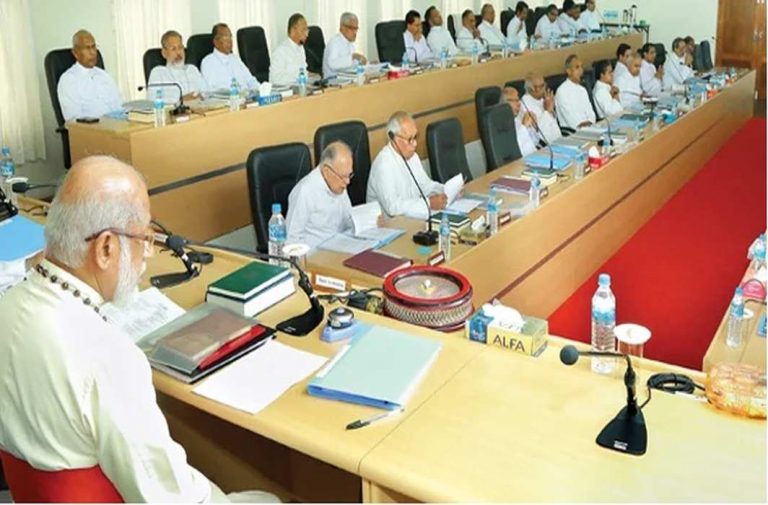 The Syro-Malabar Church, the largest Christian denomination in Kerala, has added weight to the allegations of Hindutva forces that Hindu and Christian communities in Kerala are facing the threat of love jihad. It said that love jihad “is a reality and the Islamic State (IS) has engaged Muslim men to feign love and lure scores of Christian women from Kerala to be used in terror activities”.

This was asserted at the Church’s Synod (bishops’ council meeting) in Kochi on January 15. Love jihad, also called Romeo jihad, a theory propounded by right-wing forces, involves Muslim men targeting women belonging to other communities for conversion to Islam and engaging them in terrorist activities by feigning love. The Synod, chaired by the Church’s head, Cardinal George Alencherry, also accused the Kerala police of complacency in this matter. It said there were circumstances in which Christian girls were killed in the name of love jihad. This, it said, was causing disturbance to communal amity and it was a matter of concern that it was gaining ground in Kerala.

The Synod’s statement has come at an inconvenient time for Muslim outfits and the state government, both of which have joined hands in the fight against the Citizenship (Amendment) Act (CAA). The Synod’s stand has surprised everyone as the Church is known for treading cautiously on such slippery turf. While referring to a police record, the Synod said that out of 21 people who were recruited by the IS in recent years, half were converted from the Christian faith and it should be an eye-opener for the community.

In fact, it has been alleged that several hundred Hindu and Christian girls were trapped and converted to Islam through love jihad since 2009. But the Synod found that it had become a serious matter only now. It said that it would sensitise parents and children about the dangers of love jihad.

The Kerala police reacted predictably to the Synod’s allegation. While it denied complacency in probing these cases, DGP Loknath Behera told mediapersons that the police was monitoring the situation. “There is no data to hint at the existence of love jihad. I haven’t received any complaint so far. If there is any complaint, we will monitor it,” he said.

The vice-chairman of the National Commission for Minorities, George Kurian, has written a letter to Behera seeking a report within 21 days.

Meanwhile, a section of priests under Alencherry are questioning him for making such a public statement about love jihad. A group of priests of the Ankamali-Ernakulam archdiocese have also decided to write to the permanent members of the Synod demanding a clarification on its stand. Their complaint is that the Synod took a public posture on love jihad without consulting the laity. “It will affect six million believers of the church,” Father Kuriakose Mundadan, secretary of the Presbyteral Council of the archdiocese, said. “It was inappropriate and imprudent for the bishops to have made a statement linking love jihad and Christian women,” he said. Fr Jose Vallikodath, another senior member of the Presbyteral Council, also expressed strong opposition to the Synod’s stand.

State Finance Minster TM Thomas Isaac said that the allegations of the bishops have “no factual basis” as government investigations had found nothing. “If there are concrete cases or allegations, they will definitely be looked into. But the Kerala government does not believe that there is any basis for such generalisation,” he told reporters in the state capital.

The Popular Front of India, an Islamic outfit facing charges of aiding terror modules in several parts of the country, has denied the charges and questioned the “timing” of the Synod’s statement. It urged the Church to withdraw it immediately “as it would only help create division amid growing unity against Hindutva forces”. PFI Kerala president Naziruddin Elamaram said: “The Church’s untimely statement would only help divert people’s attention from the key issues affecting society.”

Meanwhile, the Vishwa Hindu Parishad welcomed the Church statement and called for a united fight against love jihad in Kerala society. Former VHP president SJR Kumar said love jihad was a reality since 2009. He said there were conversion centres to convert Hindu and Christian girls. “We have brought this issue to the attention of Kerala society much earlier. But nobody listened to us. Now we are happy that the bishops have realised this threat. It is time for a joint fight against this menace,” Kumar said.

The Kerala Catholic Bishops Council had in 2009 alleged that around 4,500 girls had been targeted in the state. The Hindu Jana­jagruti Samiti claimed that 30,000 girls had been converted in Karnataka. In September 2019, Father Antony Thalachelloor, then secretary of the Syro-Malabar Media Commission, had said that love jihad was a cause of great worry as Christian girls were soft targets. Kurian had written to Union Home Minister Amit Shah, asking for a probe by the National Investigation Agency into such cases involving Islamic radicals. “The spate of organised religious conversions and using the victims for terror activities has shown that the Christian community is a soft target for Islamic radicals,” he alleged. Thalachelloor too alleged: “The Islamic State has been luring Christian women as part of their international agenda of hunting down Jewish and Christian women.” Several suspected cases of love jihad have been reported in Kerala with the Hadiya case being the most famous. While initially it was alleged to be love jihad, the Supreme Court ruled that it wasn’t.

The Church’s statement assumes significance in the light of an incident last year when a 19-year-old Christian woman was allegedly coerced into conversion by a Muslim man in Kozhikode. This came to light in September when her parents filed a police complaint, alleging that she was lured by one Jasim, who she had met at her coaching centre. They said Jasim drugged the girl and recorded obscene videos of her, which were later used to blackmail her. Later, the parents complained to the police that the accused was not only trying to convert the girl but also the entire family by blackmailing them.

Kurian said there was another case of a Christian girl from Delhi who went missing last year and was traced to the UAE later. He also cited a report by the Kerala Catholic Bishops Council’s Commission for Social Harmony and Vigilance which stated that 4,000 instances of love jihad had taken place between 2005 and 2012. “Conversion, per se, is not a problem, but in these cases, the conversion was not to Islam but terrorism,” he told mediapersons.

When asked about the 21 women from Kerala who were allegedly converted to Islam and taken to Syria to join the IS, Kerala Minority Welfare Minister KT Jaleel said a larger number of Muslim girls had also gone there to

fight for IS. “You can’t blame and single out one community. If a Muslim boy marries a girl from another community, it becomes love jihad. What if a Muslim girl marries a boy from another religion? What do you call it then?” he asked.

In the Hadiya case, the High Court had in 2017 ruled that Shafin Jahan’s marriage with her was null and void as it was the fallout of love jihad. But the couple, supported by Muslim outfits, took the case to the Supreme Court and managed to win it. What shocked society about this case was that the girl was asked to marry a person after she converted to Islam. Hadiya reportedly had no love affair with Shafin Jahan.

Meanwhile, Bindu Sampath, the mother of 29-year-old Nimisha (Fathima), an IS supporter who is lodged in a Kabul jail after leaving for Syria along with her husband and child, has urged the centre to bring her back. Nimisha was lodged in the jail along with nine other Indian widows who left the country to fight for the IS.

Nimisha and her husband fled to Syria when she was pregnant in 2016. Sampath said the identity of her daughter, who surrendered along with a group in Afghanistan, was confirmed a month ago. Earlier, Sam­path had alleged that her daughter was converted to Islam as part of love jihad and left Kerala under the pretext of going to Sri Lanka for religious studies.

This is an issue that will take a long time to abate.

Lead pic: A Synod meeting of the Syro-Malabar Church/Photo: catholicfocus.in