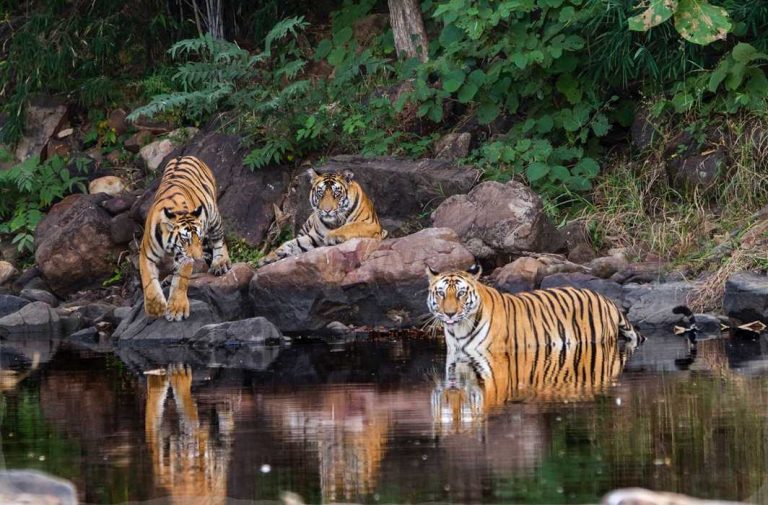 Above: A Wildlife Institute of India study found the Panna Tiger Reserve has as many as 23 tigers/Photo: facebook

Restrictions imposed by the Supreme Court in tiger sanctuaries are a perpetual cause of conflict between government personnel and forest dwellers across India. The Panna Tiger Reserve (PTR), which was set up in 1994 in Bundelkhand, is no exception.

The Reserve has been witnessing resistance from villagers to increasing curtailment of their movements in the area for the last 25 years. Their plight occasionally gets highlighted in the media, only to be forgotten soon. Against this backdrop, the MP Assembly Speaker’s rather unusual instruction to government officers recently is expected to bring about some change in the uneasy cohabitation between humans and tigers in and around PTR.

Speaker NP Prajapati asked officials of the revenue, PWD and forest departments to spend 15 days around the Madla-Ajaygarh region to understand the difficulties faced by villagers who have to take a road that passes through PTR to reach home. The Speaker’s instruction came in response to a calling attention motion moved by the BJP MLA from Panna constituency, Brujendra Pratap Singh. The MLA told the House that the forest department had put two barriers on the road between Madla and Ajaygarh, causing inconvenience to people of more than 20 gram panchayats. The villagers are allowed entry only from sunrise to sunset and are made to pay at the barriers, he said.

Restrictions on constructing a pucca road would further inconvenience them during the rainy season. Such restrictions are quotidian problems for them. Their bigger problems are of eking out a livelihood and the constant threat of eviction from their ancestral homes.

The Panna National Park was formed in 1981. Parts of the protected forests that comprise the Park were originally the hunting preserves of the former kingdoms of Panna, Chhatarpur and Bijawar. In 1994, this Park was included as India’s 22nd tiger reserve. The project was considered a failure and, in 2009, it was declared that there were no more tigers within the Reserve. In March 2009, the administration rapidly decided to reintroduce tigers there. In the last study of the Wildlife Institute of India, the Reserve had as many as 23 tigers.

During 2008-09, when PTR lost all its tigers, 12 villages were identified for relocation to create inviolate spaces for critical tiger habitats. As villagers protested, the previous Shivraj Singh Chouhan regime went slow on the relocation plan but was forced to speed up under a Supreme Court order in 2012. In Ajay Dubey vs National Tiger Conservation Authority, Justices Swatanter Kumar and Fakkir Mohamed Ibrahim Kalifulla of the apex court ordered state governments to create buffer zones around tiger reserves under the Wildlife Protection Act within three months, failing which contempt proceedings would be initiated against them and state secretaries would be fined Rs 50,000.

The three-month timeframe virtually reduced the due process of identifying and notifying buffer areas to a mockery. These areas have significant human populations and the law mandates that:

State forest department sources admit that critical tiger habitats have been notified without the scientific process and consultations mandated under the Wildlife Act, and without completion of the process of recognising rights under the Forest Rights Act. Critical tiger habitats have included not only existing core areas, but also buffers, leading to the current situation of having to notify additional buffers in areas with significant forest and non-forest (revenue, private) land that people depend on.

In PTR, 49 villages are in the buffer zone. Villagers say they have been told by the forest department that with the number of tigers increasing, PTR’s core area has to be expanded. The Reserve has always been inhabited by the indigenous communities of Gonds and Yadavs, who, since the creation of the Reserve, have been gradually moved out. Earlier, there were nine villages inside the core area of Panna, but now most of them have been relocated. Currently, there are only three villages inside the critical tiger habitat. Human settlements are not allowed in the core; buffer zones allow more space for the free movement of tigers, while also allowing humans to co-exist with them.

Living in the buffer zone does not place any restrictions on the villagers to collect, use or sell forest produce. But these activities are being increasingly restricted, as is farming in the forest. The villagers now rarely go to collect forest produce, which used to contribute to their income and household needs.

Leader of the Opposition in the assembly Gopal Bhargava said similar restrictions in other reserves and sanctuaries have made it difficult for villagers who can’t even carry matchsticks, lathis or blow horns in the forests. “Have we decided to protect wildlife by letting people die?” he asked. On the Speaker’s directive that government officials do an on-spot visit of PTR to understand the villagers’ problems, Bhargava said a practical solution has to be found to get over the restrictions while ensuring there is no contempt of the apex court’s order. Forest Minister Umang Singhar said the restrictions were enforced in view of an apex court ruling and that the Reserve was a sensitive area.

In 2011 and 2012, the ministries of environment and forests and tribal affairs issued circulars to state governments that no relocation should be carried out without first completing the process under the Forest Rights Act. These continue to be ignored by state governments and the National Tiger Conservation Authority.

Section 38 (V) of the Wildlife (Protection) Act also says that “the state government shall, while preparing a Tiger Conservation Plan, ensure the agricultural, livelihood, developmental and other interests of the people living in tiger bearing forests or a tiger reserve”. This cohabitation is protected by the Forest Rights Act, 2006. Sections 4(2)(b) and 4(2)(c) of the Act say it is important to establish that the presence of forest dwellers is causing considerable damage to the wildlife species, and to prove that other options of co-existence are unavailable.

While many families get relocated outside the forest, illegal mining continues inside the buffer area, destroying wildlife and human lives. Villagers allege that district officials want to evict them to expand the mining ambitions of the state-controlled National Mineral Development Corporation. Furthermore, a multi-crore irrigation project has been proposed inside PTR since 2005. There is the Ken-Betwa river linking project which will also impact the Reserve and affect more than 10 villages with about 1,585 families. It would submerge an area of 9,000 hectares, of which 5,258 hectares is forest land (including 4,141 hectares within PTR—both core and buffer), as per a proposal by the water resources ministry.

It is obvious the tiger is not burning bright in the forest of the night.