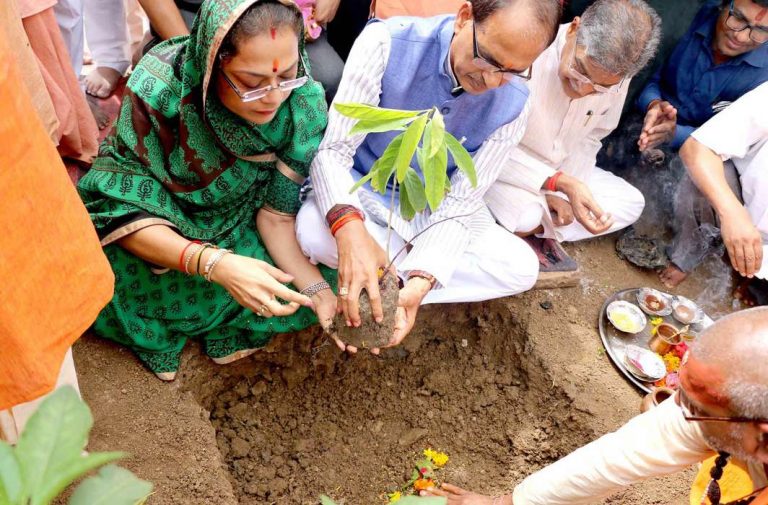 Above: The plantation drive by former MP CM Shivraj Singh Chouhan was undertaken at breakneck speed with baffling zeal/Photo: UNI

A plantation drive that was ostensibly aimed at bringing glory to Madhya Pradesh by making a world record has landed the previous BJP government of Shivraj Singh Chouhan in trouble for alleged financial bungling to the tune of Rs 450 crore. These irregularities pertain to the planting of six crore saplings by the Chouhan government along the Narmada river banks on July 2, 2017. The Kamal Nath government has now asked the Economic Offences Wing (EOW) to probe this. State forest minister Umang Singhar has asked the investigating agency to include Chouhan, former forest minister Gaurishankar Shejwar and half a dozen forest department officers in the probe.

In a letter to the EOW director general last week, Singhar claimed that the BJP government bought saplings at 10 times the prevailing rate—Rs 200 per sapling whereas the actual price was between Rs 20 and Rs 25. He also wrote a notesheet to the additional chief secretary in his department, AP Shrivastava, asking him to chargesheet Indian Forest Service (IFS) officers who were involved in the alleged fraud.

Two IFS officers, BB Singh and Y Satyam, have been named in the note-sheet. Singh was the nodal officer for the plantation drive, while Satyam had to ensure that the drive became a Guinness world record. Singhar noted that Satyam had held several meetings regarding the world record plan, but the files about the minutes of the meetings went missing from department records.

The drive was carried out in 2017 amid great fanfare. In the name of making a Guinness world record in plantation on a single day, Chouhan had tasked the forest department with procuring six crore saplings at breakneck speed. The baffling zeal with which he led the drive raised a political storm. The regional media raised questions about the drive’s viability and asked how such a huge number of saplings could have been procured and where they had been planted. Both the media and the Opposition viewed the campaign as too ambitious for the limited manpower at the government’s disposal for a day.

Unfazed by the criticism, the former chief minister persisted with the plantation claim, prompting the Congress to include the issue in its manifesto for the assembly election held last year. The party promised to get the alleged embezzlement in the name of the plantation probed. Nearly nine months after coming to power, the Kamal Nath government has moved towards fulfilling the promise.

His forest minister wrote in the letter to the EOW that the previous BJP government and its officials had committed massive irregularities in the drive, adding that the directive for a probe had come from the chief minister. “Shivraj Singh Chouhan, who calls himself son of Narmada, has embezzled Rs 450 crore and I promise that whoever is found involved in the scam will not be spared,” the minister reportedly said.

Before seeking an EOW probe, the minister had an internal inquiry done by the forest department, the nodal agency for the drive, on the alleged bungling. The inquiry found that six crore trees were not planted. What is more, far fewer pits were dug for the saplings and barely 10-15 percent of those planted had survived. Singhar said he had verified the claims of the previous government himself at Betul and found that only 9,000 pits had been dug instead of 15,000 as mentioned in official records of the district.

In the file of the internal probe that was submitted to the EOW, Singhar noted that misappropriation of public funds was done with the intention to benefit some people. The inquiry found that the decision to create a Guinness world record was taken by Chouhan’s office in 2017 in such haste that government agencies, including the forest and horticulture departments, had no time to procure saplings in such huge numbers. It also revealed that the saplings were ordered from private agencies, including many from Gujarat, Maharashtra and Rajasthan, all BJP-ruled states, at highly inflated rates.

The EOW has not yet initiated a probe as it is awaiting direct instruction from the chief minister. However, the forest minister said he was determined to get the accused who misappropriated government funds punished. Singhar claimed he was compelled to write to the EOW because some senior officers in his own department had tried to mislead him and shield the guilty officers.

Singhar’s apprehension was not without basis. Thanks to the department’s senior officers, he had to face acute­ embarrassment in the state assembly on this issue in February this year. In reply to a question on how much money was spent by the forest department on the sapling/tree plantation from July 2 to the date of the question submission and how much was embezzled in the government’s assessment, he had denied any bungling. The denial was based on inputs provided to him by forest department officials. His written reply was that “the state government has not seen so far any embezzlement in the amount (spent) on saplings/tree plantation on the bank of Narmada river”.

This denial caused acute embarrassment to the ruling Congress which had made the plantation scam a major election plank. Facing flak from his own party leaders, particularly former chief minister Digvijaya Singh, the forest minister admitted that his department’s officers had misled him. By seeking an EOW probe, the minister sought to correct the mistake.

After his Narmada parikrama (circumambulation of the Narmada river) last year, Digvijaya Singh had said that he didn’t see the saplings on the banks as was claimed by the state government. Other leaders also spoke in a similar vein. It was a major issue raised by the Congress in the run-up to the assembly elections last year.

The Narmada is the lifeline of Madhya Pradesh and evokes deep religious sentiments among Hindu voters. The river runs through nearly half of the state’s 230 assembly segments over its nearly 1,100-km course. With a view to tapping this religious faith for votes, Chouhan undertook a Narmada Seva Yatra from December 11, 2016, to May 15, 2017.

But a farmers’ stir followed this drive which had severe consequences. On June 5, the police fired at a farmers’ ga­thering in Mandsaur district, killing six. The consequent outrage across the nation badly tarnished the Chouhan government’s assiduously cultivated image as pro-farmer. The political advantages from the Yatra that Chouhan hoped to reap in the forthcoming assembly election thus got nullified. Negative public sentiments against his government were deepening.

Desperate to salvage his credibility, Chouhan went in for this plantation campaign. But the unseemly haste with which the drive was conceptualised and executed did more harm than good to his image.

While the Congress accused the BJP government of huge corruption in this drive, two prominent Hindu sants, Swami Namdev Tyagi alias Computer Baba and Mahant Yogendra, announced a yatra along the Narmada in order to expose what they alleged was a multi-crore scam.

Rattled by the announcement, Chouhan yielded to the babas’ blackmail and accorded them minister of state status along with three other religious leaders. They were nominated to a government committee which was formed for Narmada conservation. The appeasement, however, only aggravated people’s anger and suspicion about hanky-panky in the plantation campaign. Four of the five religious leaders who were accorded ministerial rank declined the privilege. Computer Baba even joined the Congress ahead of the assembly election, saying he would expose the scam in the plantation drive.

The rot was finally exposed.