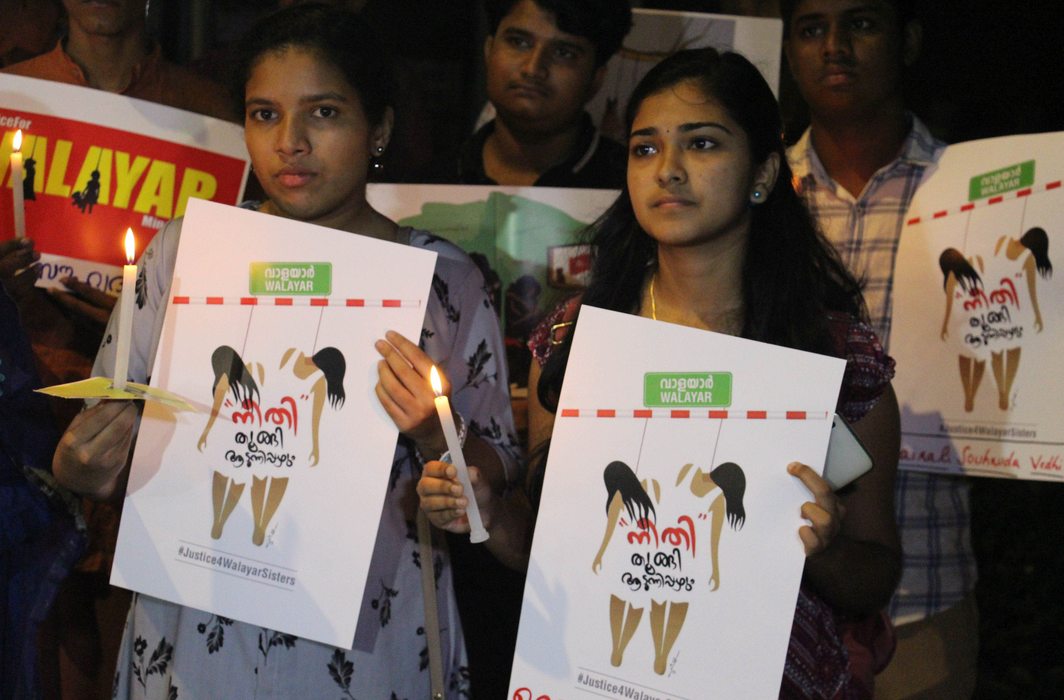 Above: A protest demanding justice for the Walayar sisters in front of Kerala House in New Delhi/Photo: UNI

A POCSO court judgment, acquitting three rape accused, has kicked up a storm in Kerala as charges fly thick and fast of police and the prosecution succumbing to political interference

Badly mauled in the Lok Sabha elections held earlier this year, the Left in Kerala had regained some ground in recent times, as the results of the recent bypoll to five assembly constituencies showed. The revival, however, seems to be short-lived as the Left Democratic Front government headed by Pinarayi Vijayan once again finds itself in the eye of a storm. There’s public outrage and cries of sabotage after a special court under the Protection of Children from Sexual Offences (POCSO) in Palakkad, Kerala, acquitted on October 25 all three accu­sed in a rape case in which two minor sisters, aged 13 and nine, later died.

The verdict has shocked and divided the state. Left intellectuals and liberal women’s organisations, never ones to let go an opportunity to cry foul on any matter, are keeping a mysterious silence, clearly not to embarrass the government, but the Congress and the BJP, both of whom share the opposition space in Kerala, have stepped up pressure on the government, demanding reinvestigation of the case by the CBI.

Fingers are being pointed at the systematic manner in which the state police sabotaged the case from the beginning of the investigation and the way the prosecution conducted the case. Both are alleged to have worked at the behest of their political masters to ensure that the culprits—who were linked to the ruling Communist Party of India (Marxist)—walked free.

The three were accused in connection with the rape of the two minor Dalit sisters in Walayar, Palakkad district, in early 2017. The two were found hanging inside their one-room shack, but 52 days apart. The autopsy tests confirmed that the girls were subjected to sexual assault before their lives were snuffed out. Another accused was held not guilty in an earlier judgment on September 30.

It was on January 13, 2017, that the elder girl was found hanging from a rafter inside her one-room home by her younger sister. The nine-year-old told police that she had seen two men leaving the house that day, with their faces covered.

Though a case of unnatural death was registered by the police, apparently following the local CPI(M) leadership’s intervention, the investigation was not allowed to progress.

The people taken into custody were released the same evening, without even the fig leaf of an interrogation despite the murdered girl’s parents, both construction labourers, alleging that their daughter was murdered.

Less than two months later, the younger girl was also found hanging from the same rafter in the same room. Protests soon erupted and as pressure built up, police had no option but to arrest five persons, among them a juvenile. They were charged under stringent provisions of the POCSO Act for rape and abetting suicide.

The girls’ mother pointed to lapses in the police probe and interference at local political levels as reasons for the accused to go scot-free. According to her, the police either twisted her statement or did not bother to record what she had said in detail to them. The police said the mother told them that the girls committed suicide to escape repeated rape by a close relative.

“I did not say that my daughters were committing suicide. How can a 13-year-old and nine-year-old commit suicide within a gap of 52 days? The police tried to make us believe they committed suicide. Police wanted us to accept this and tell everyone the same. But I don’t believe my daughters took their own lives,” the hapless mother of the minor girls said.

She told mediapersons soon after the court verdict was out: “The younger girl was an eyewitness to two men leaving our home after killing the elder one. That’s why she was also killed.”

The court found that there were contradictions in the depositions of the two prosecution witnesses. A statement by one of the witnesses in the court that the accused had given the older girl a cellphone to click his nude pictures was not found in the statement to the police that the same witness had made.

As if all this wasn’t enough, the state government also had some self-inflicted injuries. The opposition went hammer and tongs after it was found that the state’s Social Welfare Department appointed N Rajesh, the lawyer of Pradeep Kumar, one of the accused, as chairman of the Child Welfare Committee (CWC) in Palakkad.

The incongruity of a lawyer defending an accused child rapist heading a committee meant to look after the welfare of minors did not seem to bother the government, but as protests, both from the political class and ordinary citizens, flared up, the government removed him from the post.

The Commission had informed the state government about its visit to Walayar. But the government did not cooperate. “It consciously removed the prosecutors repeatedly to save the accused,” Commission member Yaswanth Jain said. The chairman of the state commission for child rights, P Suresh, said the Kerala police had committed grave lapses in the case.

“The investigating officers did not hold any serious talks with the prosecutors or main witnesses and the doctors. The prosecution thus could not connect the evidence and the statements of the witnesses to prove the case effectively,” he said.

There is evidence strewn all around that the prosecution did its best to botch up the investigation in order to help the accused. Police had recorded statements from 57 people, of whom 10 said they had seen the accused coming several times to the house of the girls. The younger child had told the police that she had seen two people with covered faces leaving the house on the day the elder girl was found dead. The prosecution never presented these facts before the court.

Moreover, the victims’ mother had lodged a complaint of sexual assault against one of the accused on the day the elder girl was found hanging from the rafter in the house. She says the prosecution and the police had sabotaged the case as the accused were members and sympathisers of the CPI(M). The police had not even told her about the day of the judgment, and she learnt about it from others, she said.

The autopsy test reports of both minor girls confirmed that they were repeatedly raped. The report once again gained significance after the first POCSO court, Palakkad, acquitted the first, second and fourth accused.

The autopsy, conducted at Palakkad district hospital on February 3 and March 7 in 2017, found clear evidence of  multiple sexual assaults, including unnatural sexual abuse.

Dr PB Gujral, senior police surgeon, who had conducted the autopsy of the sisters, had said that he had informed the police that there was clear evidence of rape on multiple occasions.

The autopsy report said: “In view of the age of the child (9) and the length from the sole of heel to tip of right middle finger with right upper limb fully extended upwards, the possibility of homicidal hanging must be ruled out by correlating the measurement at the scene of crime and investigation.”

While POSCO special public prosecutor Latha Jayaraj said a decision on filing an appeal would be taken later, defence lawyer Ranjith Krishna, admitted that the lapses in the police probe and political interference led to the acquittals. “I know personally that there was high-level political interference in the case. The police was not given a free hand to investigate the case. That was why it failed to collect proper evidence,” he told mediapersons.

Krishna’s comments give further credence to rumours doing the rounds about the prosecution and the police going out of their way to ensure that the case was thrown out. As the case suffered a series of setbacks, the then sub-inspector of Walayar police station, PC Chacko, was suspended for the lapses in the initial stages of the case.

The station house officer at that time failed to detect the crime when the elder girl was found hanging. By the time the case was handed over to MJ Sojan, deputy superintendent of the Palakkad narcotic cell, the accused had already conspired with the right people to create an escape route for themselves.