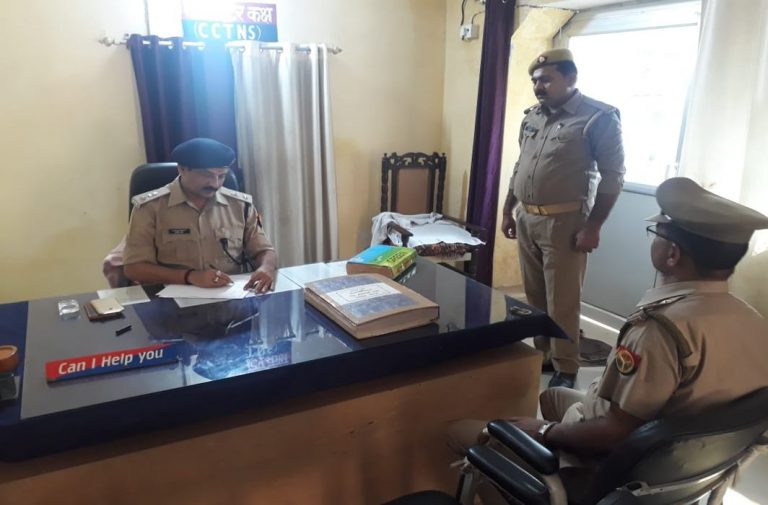 The UP police is at the centre of a storm after details are leaked of a report that levels serious allegations, including bribery for postings, against top police officers of the state

Uttar Pradesh Chief Minister Yogi Adityanath loses no opportunity to remind anyone who cares to listen that he is running a corruption-free government but even a casual look at the state’s police department paints a different picture—bribery rackets thrive. Currently it is mired in one involving senior police officers.

In the middle of the controversy, the government presented the department with the police commissioner system for Lucknow and Gautam Buddh Nagar (Noida), deflecting the attention from the serious corruption charges against five IPS officers by former SSP, Noida, Vaibhav Krishna. “The way Vaibhav Krishna’s case has been handled shows that zero tolerance for corruption is not visible,” said former DGP of UP Vikram Singh, who otherwise was happy with the introduction of the commissioner system.

The dark underbelly of the Uttar Pradesh police has been exposed by Krishna, who blew the whistle on some of his fellow IPS officers offering bribes to get postings in districts of their choice, a euphemism for districts where illegal money-making is easier than in other places. Ironically, while Krishna has been suspended by the state government, the five IPS officers named by him in the confidential report have only been transferred.

Incidentally, a sleaze video of Krishna that appeared after the complaint and was found to be genuine after a forensic report was one of the reasons for his suspension. The government has maintained silence over the WhatsApp chat and audio CDs involving five IPS officers and alleged fake journalists which Krishna provided to the government. “Vaibhav Krishna’s allegations are far more serious than the contents of the controversial sex CD which only amount to misdemeanour and not an act of moral turpitude,” said Vikram Singh.

Singh also questioned Krishna’s suspension for leaking the confidential letter. “It could have been leaked by anyone,” he said. In Singh’s opinion, Krishna’s suspension proves that he had ruffled the feathers of some of those occupying high positions who are part of the corrupt nexus. The five IPS officers who were named by Krishna have got away with transfers when they should have been attached to the DGP’s office, Singh said, adding that punishment meted out to Krishna is “disproportionate and harsh”. On a smaller scale, district postings often happen after police inspectors bribe their superiors and politicians, eyeing “lucrative” thanas (police stations) in districts. In Lucknow, for instance, Naka Hindola, Chowk, Aminabad and Madiyaon have been infamous as priciest postings.

Krishna had written a confidential letter to the state government alleging that some fake journalists were taking bribes for the posting of IPS officers. The letter was leaked to the media and the Director General of Police, OP Singh, believes Krishna is responsible for the leak. “I have asked Inspector General of Police (Meerut range) Alok Singh to seek an explanation from the SSP,” he said at a press conference. He did not comment on the letter’s content but said that it was “unauthorised communication” by the officer. He made no mention of any action, if planned, against those named in Krishna’s letter. The DGP also told the media that the case had been transferred to another district “for impartiality”. Sanjiv Suman, SP, Hapur, was asked to investigate.

In his letter, Krishna is alleged to have written that police officers, including those from the IPS, were offering bribes, ranging from Rs 50 lakh to Rs 80 lakh, to get plum postings. Krishna named five UP-cadre IPS officers with details of their WhatsApp chats and audio recordings. Not just IPS officers, Krishna also wrote of wrongdoings in the ranks in his letter.

As per the letter, the dirty dealings surfaced in the course of investigation of a case under the Gangsters Act in which four fake journalists had been arrested on August 23 last year. One of the accused claimed to be a journalist on the run. The five IPS officers and others, according to Krishna’s letters, were in cahoots with the fake journalists.

One IPS officer named in Krishna’s letter talks of his transfer to a particular district for which he was willing to pay Rs 80 lakh. As per the alleged deal, 50 percent of the amount was to be paid in advance and the remaining within one month of the posting to a western UP district. Another IPS officer posted in an eastern UP district and seeking a posting in the western part of the state was quoted the figures of Rs 30 lakh for Bijnor, Rs 40 lakh for Bareilly and Rs 50 lakh for Agra by the arrested fixers. The conversation and WhatsApp chat between the IPS officer and one of the accused has been provided to the government. One IPS officer allegedly lobbied for a good posting for a constable with criminal antecedents.

After Krishna’s complaint, a smutty video purportedly of Krishna having a sex chat surfaced. The officer claimed the video had been morphed and was part of a conspiracy to malign him and warned that anyone found forwarding it with malafide intention would be penalised. “It is my appeal that criminal activity should not be supported that way…. Everyone has a right to privacy,” Krishna, who has since gone incommunicado regarding the media, is reported to have said. But a forensic report said that the CD was not morphed.

Commenting on the complete inaction against those named in Krishna’s letter, former DGP of the state Prakash Singh, said he was pained and anguished that the corrupt officers named in the letter were getting support from levels which cannot be named. “Everyone seems aware but is reluctant to take action,” he told India Legal. Another former DGP, not wanting to be identified, said that he was not at all surprised as bribing politicians for plum postings has been going on for years. What was shocking was that IPS officers were approaching touts for the job and the practice had become more rampant, especially in western UP. Both the former DGPs had a favourable word to say about Krishna as an officer.

A police officer, Ashok Kumar Singh, who rose from the ranks, has written a book Aainaa (Mirror) describing in detail the murky workings of his department in which low-paid constables and head constables have to bribe their superiors to avoid harassment and difficult postings. Like them, sub-inspectors and inspectors have to pay their superiors in turn for favours which may include avoiding suspension on flimsy grounds, promotion, transfer to tough places or simply to police lines, Singh says in the book. This system has helped the corrupt and those with a criminal streak in the department, he said.

To add to the controversy, a Twitter handle @ipsjkishore08, purported to be that of IPS officer Jugul Kishore, tweeted: Dhuaan utth rahaa hai to aaag avashya hai.Yahaan to dhuaan aur dhundh dono hain. Parantu ahankaar me andhe Dhritrashtra ko sabhee bhrasht, charitrheen priya hain. Kahne maatr ko ye Kaurav/Paandav sabke mukhiya hain, kintu sarvatra kaurav hee maje le rahe hain. Unke saare paap maaf hain kyonki Dhritrashtra unke baap hain (There can’t be smoke without fire. Here there’s both smoke and mist. But all the corrupt and characterless are loved by Dhritrashtra, who is blind with arrogance. Although he is the head of both Kauravas and Pandavas, but it is the Kauravas who are ruling the roost everywhere. All their sins are forgiven as Dhritrashtra is their father.)

The state police have always been loathed for their behaviour and criminal ways. In 2018, the National Human Rights Commission called the UP police “an organized gang of criminals” for wrongful detention, sexual assault, false implication and cover-up in a case.

Sulkhan Singh, who preceded OP Singh, said the “British police was far better than today’s in many ways, especially in behaviour and honesty”.

With a big question mark over their integrity, the credibility of the police, under a cloud since the days of anti-Romeo squads and encounter killings, has been further eroded. It is anyone’s guess if the two police commissioners would even be inclined to stem the rot in the system as a corrupt and compromised police force suits politicians.

Lead pic: There is a big question mark over the integrity and credibility of the UP police department