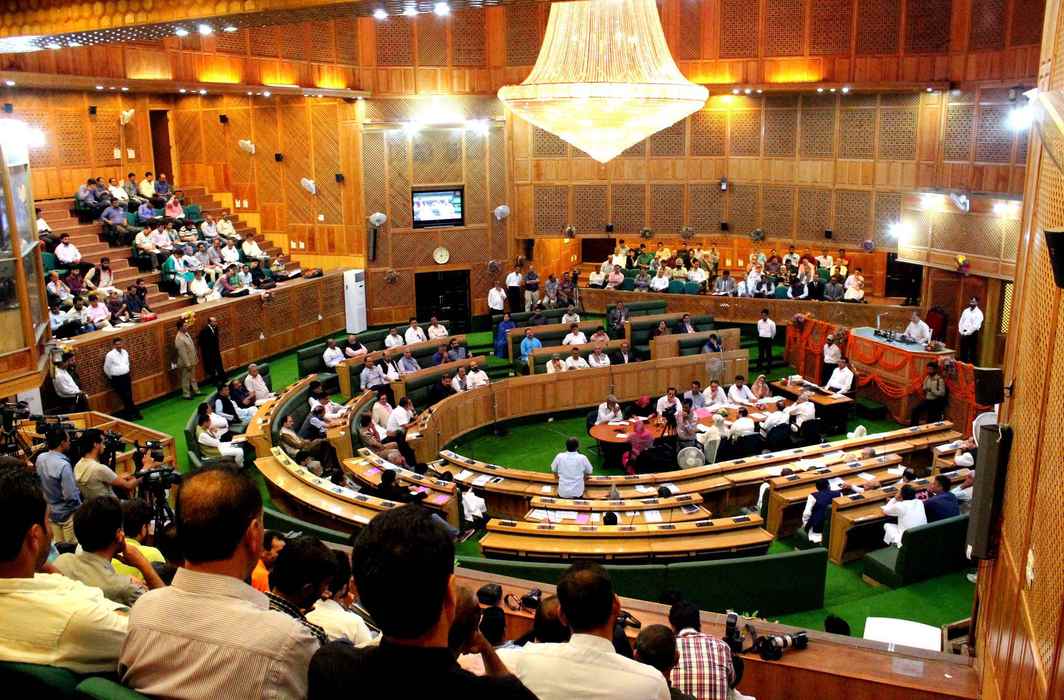 Above: The Jammu and Kashmir Legislative Assembly in session/Photo: UNI

In an unprecedented case, the Speaker of the J&K Assembly has been removed without any warning after the state became a UT. Is this executive interference in legislature’s domain?

Can an assembly Speaker be removed through an executive order? This question cropped up after academician-politician Nirmal Singh, one of the topmost BJP leaders in J&K, was told to stop working as Speaker, a post he held from May 10, 2018. This unprecedented incident in the country’s parliamentary history took place after the transition of the state into a Union Territory (UT).

The Jammu and Kashmir Reorganization Act is silent on the subject of the assembly and its presiding officer ceasing to exist with the abolition of J&K as a state. If at all, its Section 46 (2) seems to view the Speaker as a continuing entity: “…the rules of procedure and standing orders in force immediately before the commencement of this Act, with respect to the Legislative Assembly of the existing State of Jammu and Kashmir shall have effect in relation to the Legislative Assembly of the Union territory of Jammu and Kashmir subject to such modifications and adaptations as may be made therein by the Speaker of Legislative Assembly.”  In contrast, the Act is categorical about defining the role of almost all other constitutional institutions in the altered scenario.

Parliamentary practices, as explained by leaders and pundits, have always attached great significance to the post of the Speaker in a parliamentary democracy, going to the extent of saying “once a Speaker always a Speaker”. However, even they would not have visualised a situation like the one in J&K where there was executive interference in legislature’s domain.

The confusion has become more confounded because the executive acted a fortnight after the formation of the UT during which period Nirmal Singh was performing his duties as a Speaker. Inquiries reveal that he was not even consulted on the issue.

The Reorganization Act has meticulously elaborated on the role of key authorities after the transformation of the state into a UT. For instance, it has clearly stated that “the Governor of the existing State of Jammu and Kashmir shall be the Lieutenant Governor for the Union territory of Jammu and Kashmir, and Union territory of Ladakh for such period as may be determined by the President”. Practically speaking, this would have meant the demotion of the outgoing governor, Satya Pal Malik, who has since been transferred to Goa and new administrators have been brought in as lt-governors in the two UTs.

The Act made no similar clarification about the status of the Speaker in the new administrative set-up. It was only on November 16 that the Secretary of the UT’s Department of Law, Justice and Parliamentary Affairs issued a notification which inter alia made a direct reference to Nirmal Singh: “Dr Nirmal Singh, Speaker of the Legislative Assembly of the erstwhile State of Jammu and Kashmir shall be deemed to have ceased to hold the office of Speaker

of the erstwhile State of Jammu and Kashmir with effect from 31st October 2019.”

The notification explained that Singh was appointed as Speaker of J&K under Section 57 of the Constitution of Jammu and Kashmir and after dissolution of the assembly, he continued in his post under Section 58 of the same Constitution. However, the notification said that according to the “Jammu and Kashmir Reorganization Act 2019 with effect from 31st day of October 2019, the appointment of Speaker and the Legislative Assembly and all other matters related to the Legislative Assembly of the Union Territory of Jammu and Kashmir are governed by sections 17 to 26 of the said Act, and whereas the President of India, while exercising his powers under Section 73 of the Jammu and Kashmir Reorganization Act has, vide Order made under S.O. No 3937 dated 31st October 2019 suspended the provisions of sections 17 to 26 of the said Act relating to Legislative Assembly including the appointment of Speaker and his continuation in office”. It further said the matter had been examined in consultation with the advocate general of the UT and the legal position was that the Speaker of the erstwhile assembly cannot hold office after the reorganisation of the state into the UTs of J&K and Ladakh with effect from October 31, 2019.

Section 73 of the Constitution of J&K relates to “provision in case of failure of constitutional machinery” and empowers the president to “suspend the operation of all or any of the provisions of this Act for such period as he thinks fit and make such incidental and consequential provisions as may appear to be necessary or expedient for administering the Union territory of Jammu and Kashmir in accordance with the provisions of this Act”. Sections 17 to 26 govern the tenure, functioning and election/removal/resignation of presiding officers of the legislature. Of them, Section 19 prescribes the procedure for the exit of the Speaker: “A member holding office as Speaker or Deputy Speaker of the Assembly: (a) shall vacate his office if he ceases to be a member of the Assembly; (b) may at any time by writing under his hand addressed, if such member is the Speaker, to the Deputy Speaker, and if such member is the Deputy Speaker, to the Speaker, resign his office; (c) may be removed from his office by a resolution of the Assembly passed by a majority of all the then members of the Assembly.” Nowhere does it say that a Speaker can be removed retrospectively by an executive order. Moreover, how can the legal provisions be relevant in a notification issued 15 days after their suspension?

It is believed that Singh’s exit was linked to intra-party rivalry. He is learnt to have sought the guidance of Lok Sabha Speaker Om Birla to bring some clarity on the issue. Mohammad Akbar Lone, National Conference Lok Sabha MP and a former Speaker of the J&K Assembly, told India Legal that Singh “should have been consulted and allowed to gracefully leave the office. The Speaker could not have continued after the state ceased to exist”. Incidentally, Lone had filed a petition along with his party colleague and MP Hasnain Masoodi, in the Supreme Court challenging the revocation of J&K’s special status.

Former cabinet minister Harshdev Singh, whose National Panthers Party is a challenger to the BJP in the Jammu region, said in a media interaction that  “the continuance of the Speaker defied all logic and rationale besides being violative of the Constitution and the provisions encapsulated in the J&K Reorganization Act”.

Leaving aside politics, the issue needs to be settled in the light of the doctrine of separation of powers among the three organs of the state—the Legislature, the Executive and the Judiciary.