Above: Muggers, covered by Schedule 1 of the Wildlife Protection Act, 1972, are being removed from their habitat (Representative image)/Photo: UNI

In a highly criticised move, the Gujarat government has cleared two ponds near the Sardar Sarovar Dam of crocodiles so that seaplane services can take off

As Prime Minister Narendra Modi pilots his pet projects, the Gujarat government is bending backwards to ensure that his will is their command. After bulldozing tribal sentiment in the matter of the Sardar Vallabhbhai Patel’s Statue of Unity (SOU), the Vijay Rupani-led BJP government in Gujarat is clearing two ponds on the premises of the Sardar Sarovar Dam of crocodiles to enable seaplane services.

By last count, there were some 500 crocodiles, of which about 20 had been taken out until last week. But the work has been accorded priority by the forest department because of orders from the “top” though everyone clammed up on further probing.

The muggers in the Narmada are covered by Schedule 1 of the Wildlife Protection Act, 1972, which puts them among the most endangered species. Removing them from their habitat entails a lengthy process of permissions and reasons.

However, when it comes to such directions from the state government, these objections just fade away as no one is willing to bell the cat.

Wildlife conservation laws mandate a detailed procedure, including studies and surveys, before the translocation of endangered species is carried out. Additionally, the International Union for Conservation of Nature (IUCN) has laid down detailed guidelines for relocation and conservation translocation. The IUCN Special Survival Commission (SSC)—a science-based network of more than 8,000 volunteer experts globally— has also detailed the subject.

The IUCN red list of threatened species has also classed this particular crocodile in its global rating as vulnerable. In India too, it figures on the most endangered species list.

For all the red flagging by both national and international wildlife institutions, no exercise seems to have been initiated at the official level to comply with mandated regulations.

“After tribals, it is now the turn of crocodiles,” said Vadodara-based environmental activist Rohit Prajapati. The terror of tourism has been unleashed by both the state as well as the centre in the name of the Statue of Unity (SOU), said this crusader against pollution and environmental degradation.

“It is almost as if the SOU area is now not part of India, but a sovereign entity called the Statue where laws such as the Wildlife (Protection) Act, 1972, Environmental Impact Assessment Notification, 2006,  Environment (Protection) Act, 1986, Wetlands (Conservation and Management) Rules, 2010, Solid Waste Management Rules, 2016, Water (Prevention and Control of Pollution) Act, 1974, and the Right to Fair Compensation and Transparency in Land Acquisition, Rehabilitation and Resettlement Act, 2013, are just not applicable,” he added. 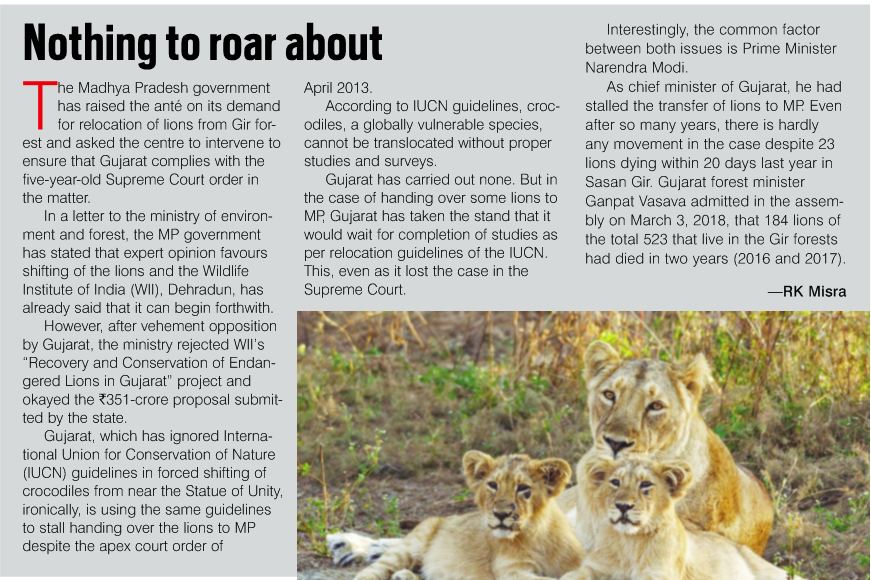 The refrain of the forest department all along has been that crocodiles captured from the vicinity of riverine areas near human settlements are released in the Narmada dam ponds. A panel comprising civil aviation and Gujarat government officials has zeroed in on one of the ponds as the ideal site for setting up a seaplane terminal after Prime Minister Modi decreed seaplane services to the SOU to connect cities in Gujarat.

In 2017, as part of his poll campaigning during the Gujarat assembly elections, Modi travelled in a seaplane from Sabarmati river in Ahmedabad to Dharoi Dam in Ambaji. Seaplane travel is likely to be brought under the ambit of Udan, the regional air connectivity scheme of the centre, what with both the Airports Authority of India and the civil aviation ministry at work alongside the Gujarat government. Last heard, Palitana and Dharoi Dam, both near Hindu religious shrines, are being shortlisted as “waterdrome” sites for seaplane services. A seaplane needs a water body of 900 m width and 2.1 m depth.

Dr K Sasikumar, deputy conservator of forests of Narmada, is on record stating that 10 teams are at work shifting the crocodiles. Experts say that the breeding season among crocodiles begins in October/ November with nesting spread over several months from December to May. This is the time when extra care is taken to leave them undisturbed.

Environmentalists and wildlife experts term the transfer of crocodiles at such a juncture sacrilegious and the forest department’s involvement in it as criminal. Moreover, ridding the area of such a large number of them will take a long time.

“It will be prudent and economical to construct a landing platform at only a fraction of the outlay of the Statue for seaplanes and save the bother of transportation of these crocodiles,” said Dr Jitendra Gavali, director of the Comm­unity Science Centre, Vadodara.

Dr Manish Doshi, spokesperson for the Gujarat Congress, terms it criminal wastage of resources to cater to the whims and fancies of Modi. “On the one hand (million acre feet) of Narmada water is flowing into the sea because 40,000 km of minor canal network has not been made while, on the other hand, the exchequer is being made to bleed, catering to such grandiose fetishes,” he said.

Gujarat was sanctioned the present height of the Narmada dam only to meet the irrigation needs of the farmers of drought-prone Saurashtra and Kutch. “The bulk of these areas is facing scarcity and farmers are committing suicide while precious water is being wasted in catering to one man’s fantasies,” Doshi said. The fact is that Gujarat needs more state transport buses than bullet trains and seaplanes.