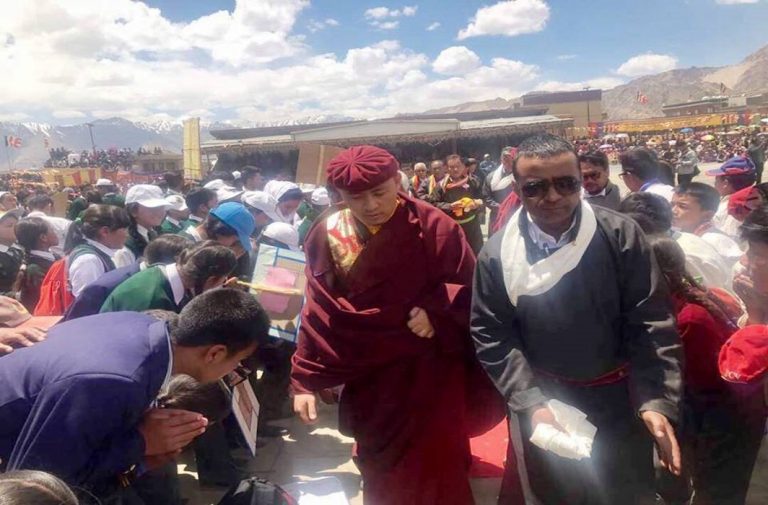 Above: Tsewang Thinles (in black) at an event in Leh; two young girls have levelled sexual harassment allegations against him/Photo: facebook

By virtue of its idyllic location and Buddhist influence, Leh district in J&K comes closest to Shangri-La, described by James Hilton in his 1933 novel, Lost Horizon. A glaring difference at the moment is that it is not the mythical fictional happy land. It is seething. The disclosure of alleged sexual assaults on a poor schoolgirl by Tsewang Thinles, president of the powerful Ladakh Buddhist Association (LBA), has triggered widespread anger and anguish.

The students’ community, in particular, is up in arms. It is asking serious questions of the LBA (which has enjoyed high moral authority during the 86 years of its existence), politicians and society as a whole. One of them said at a rally in Leh on July 4 that enough was enough. She herself, she said, had suffered a sexual assault in the past, but kept silent for fear of society. No longer should girls suffer in silence, she asserted, adding that culprits must be brought to book.

The shocking incident took place in March. The Delhi-based Ladakh Students’ Welfare Society Delhi (LSWSD) spilled the beans about it in a letter on June 23 to the LBA vice-president, with copies to its women’s and youth wings as well as to the lone Lok Sabha member from the Ladakh parliamentary constituency of which Leh is a constituent.

The LBA did not react to the letter, but lost no time in sacking its president from the post as well as the organisation after the victim filed an official complaint and the police registered an FIR on July 1. At an emergency meeting of its central working committee (CWC) on July 2, the LBA “unanimously and in one voice condemned the alleged criminal act” of Thinles and described it as an “alleged act of shame” and “an extreme shock to the Buddhist community”. It demanded a “free and fair trial of the case through a fast-track court” and elevated its senior vice-president, PT Kunzang, as president “till the term of the present general council is completed in the overall interest of the organisation”.

Speaking from Leh, Kunzang explained to India Legal the LBA’s reasons for not acknowledging the LSWSD’s letter written by its president, Jigmat Paljor, and its rapid strike in the wake of registration of the FIR: “How can we take action on a complaint of an organisation without any proof? We offered that we could meet the girl to help her but they did not allow us, saying that we might exert undue pressure. But soon after the police registered the FIR, the CWC took action and sacked the accused from the post of president.”

Paljor had stated in his letter: “The victim belongs to a poor family with a sick mother to look after; the mother is currently undergoing medical treatment at AIIMS Delhi. She approached our organisation for help. We felt it was our moral duty to seek justice. I expect the same from your esteemed organisation. You must immediately act and (hold) inquiry into the sexual harassment case with utmost seriousness. The girl is in genuine need of special assistance both morally and financially.” He demanded the “immediate resignation” of Thinles.

In a press release issued after the LBA removed Thinles, LSWSD elaborated: “When a minor girl belonging to a financially weak section approached us seeking help for her mother’s treatment, we were shocked when she told us that Tsewang Thinles, whom she approached earlier for help, took advantage of her circumstances and sexually assaulted her many times on the pretext of helping her mother. She was scared and deeply hurt but also very courageous to have spoken about this unfortunate incident. We, as a student union, consider this our moral duty to help and support her and to assure her that we are with her at every step.”

Dispelling an impression that he too had chosen to keep silent, young Ladakh MP Jamyang Tsering Namgyal of the BJP told India Legal: “On learning of the incident, I immediately took up the matter with the deputy commissioner, Avny Lavasa, and the senior superintendent of police, Sargun Shukla, and asked them to take quick action and punish Thinles if he was found guilty. I took care to ensure there was no politicisation of the issue as it is too serious a matter.” He said he asked the LBA to take appropriate action consistent with its constant concern for morality in society.

At present, the whereabouts of the accused are unknown. The discomfiture he has caused to the LBA is acute. So far, the premier Buddhist outfit has called the shots on all major social, religious and political issues. Ever since J&K’s accession to India in October 1947, the LBA has been in the forefront of the agitation for making Ladakh a Union Territory by separating it from the unique and controversial state. Two of its most successful presidents in recent years have been Thupstan Chewang, who twice represented Ladakh in the Lok Sabha, and Tsering Samphel, a former Congress legislator. Both are disappointed with the latest turn of events. Samphel, when contacted in Leh, said that a question of credibility had indeed arisen. Politicians of all hues have rallied behind the students and expressed solidarity with the victim.

The LBA also stands by the victim but has invited criticism for having skipped the students’ rally. Kunzang said: “We were not invited. Still we decided to go ahead and participate to show our solidarity with the cause. At the last minute, we learnt that aspersions were being cast on us for having acted in an unconstitutional manner despite our having taken prompt action. This compelled us to change our mind.”  He added: “The credibility of the LBA has been dented. My priority will be to restore it.”

Kunzang has a tough task on hand. He has secured the nod of the LBA’s general council at its July 10 meeting to ratify the CWC’s decisions, including about his elevation. This was not before a show of resistance by students, who along with some Buddhist monks barged in, demanding dissolution of the entire executive. Protesters, being non-members of the council, could not make much difference. However, they gave enough indication that they would continue to pose a challenge outside.

More skeletons, meanwhile, have started rattling in absconding Thinles’ cupboard after his removal as the LBA chief. Another girl has emailed Deputy Commissioner Avny Lavasa, alleging sexual harassment by Thinles on May 17 and 21: first time he “squeezed me completely into his arms and kissed me hard on my cheek” and on the next occasion he “kept touching my hands and squeezed my cheeks while he was driving”. When contacted, Lavasa confirmed the receipt of the email and said it had been forwarded to the police.

“The Me Too movement has finally crossed the Himalaya and reached Leh,” said Tsering Dorjay, a senior BJP leader and member of the Legislative Council (MLC) who is a signatory to the demand for sacking the entire LBA executive.