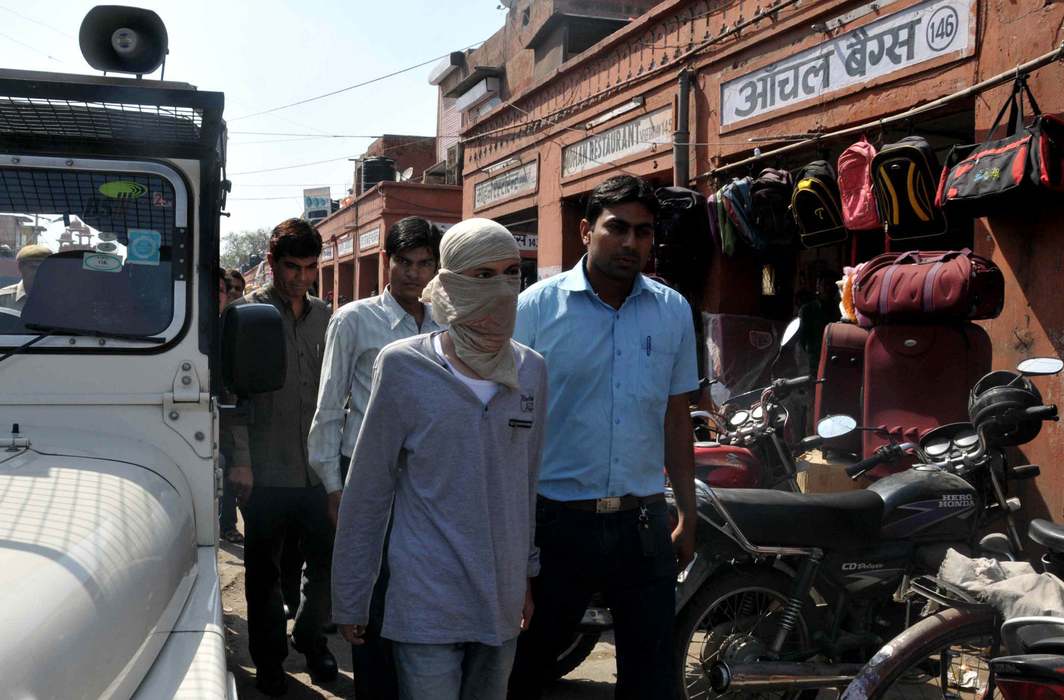 Above: Anti-terrorist squad taking an Indian Mujahideen member for verification in Jaipur/Photo: UNI

In a move that has alarmed civil rights activists, the Rajasthan government plans to bring in a law on the lines of MCOCA. It defines terrorism broadly and has no provision for bail

Doubting the efficacy of such a law and questioning the need for it, they say the proposed Rajasthan Control of Terrorism and Organised Crime (RCTOC) Bill, like the previous draconian Terrorism and Anti-Disruptive Activities (Prevention) Act (TADA) and Prevention of Terrorism Act (POTA), will curb civil liberties and give the police sweeping powers, leading to corruption, torture and tyranny.

The draft of the Bill, which according to the Rajasthan police is being examined at various levels, says that evidence collected through the interception of wire, electronic or oral communication under the provision of any other law shall be admissible as evidence against the accused in the court during trial.

Secondly, despite the provisions enumerated in the Code of Criminal Procedure or in the Evidence Act, a confession made by a person before a police officer not below the rank of the superintendent of police or commissioner in the form of writing or on any mechanical or electronic devices such as cassettes, tapes or sound tracks shall be admissible in the trial of such an accused, abettor or conspirator. The draft, like its avatars in Maharashtra and Gujarat, has no provision for bail.

Akhil Chaudhary, a Rajasthan High Court lawyer and human rights activist, told India Legal that the draft bill was against the spirit of the law of the land. As per the Indian Evidence Act, no confession made before police is admissible. The idea behind such a provision was that law enforcement agencies can use physical torture to extract a confession. Chaudhary said: “The main problem with such laws is the confession before the police. The conviction rate under such laws is very low. The Evidence Act was enacted by the British when India was its colony. Even our colonial rulers were aware that the police could use torture to get confession. If this is happening in independent India, then it’s really bad.”

Also, it is against the law laid down by the Supreme Court in the S Selvi case which protects the right against self-incrimination. The Court had drawn a distinction between illegally obtained evidence and an unconstitutionally obtained one, he said. Recently, the Bombay High Court had ruled on phone tapping and quashed the surveillance order and directed the CBI to destroy the call records obtained by it.

Mehrunnisa Khan, national president of Women India Movement, an NGO which works for empowering women, has questioned the need for such a law in Rajasthan. Khan told India Legal that laws like TADA and POTA were enacted to strengthen anti-terror operations. TADA was enforced when terrorism was on the rise in Punjab and POTA was the result of the terrorist attack on Parliament. “Do we face such a situation in Rajasthan? Except a few minor incidents, the state has remained peaceful and has home-grown terrorism,” she said.

Instead of bringing in such legislation, she said, the state government should devote more attention to law and order, especially crimes against women which had seen a 66 percent rise between January and July this year as compared to the same period last year.

Khan even questioned the efficacy of such a law both in terms of curbing crime and the conviction rate. “If laws like TADA and POTA were effective, why were they repealed or allowed to lapse? With a conviction rate of almost one percent, these laws were miscued or used to target minor communities. Even then Home Minister LK Advani is on record saying POTA was being misused,” she said. The draft law violates the basic principle of criminal justice as it presumes the person to be guilty before he goes through a fair trial, and puts the burden of proof on the accused instead of the prosecution, she added.

Disha Bangard, a lawyer, concurs with this view. She told India Legal: “Although the state shares a border with Pakistan and there is a train service between the two, Rajasthan has been peaceful. There is hardly any news of cross-border infiltration or terrorism.”

As far as economic offences are concerned, she said they were common everywhere and making a state-specific law was not prudent as the state machinery could be used to harass the already overwhelmed business community. Rajasthan is not overrun by “organised crime” either.

The definition of crime under the new Bill is vague at best and might cover all instances if the executive feels the need. The four heads that it tries to oversee through a broken perspective cannot be bound together; economic offences and terrorist activities can never be equated, Bangard said. Also, the Bill seeks to override the right to privacy which is fundamental to one’s life and liberty.

What is more worrying is that like GUJCOCA or the more stringent Unlawful Activities Prevention Act, the Rajasthan law draft defines terrorism broadly so that it can be used to stifle dissent and against those involved in civil protests or struggles. It defines terrorism as an act committed with the intention to disturb law and order or public order or threatening the unity, integrity and security of the state.

This is in sharp contrast to the definition of terrorism given by the United Nations in 2006, in which the special rapporteur said that to call an offence a “terrorist act”, three elements must be cumulatively present: the means used must be deadly, the intent behind the act must be to cause fear or to compel a government or international organisation to do or refrain from doing something and the aim must be to further an ideological goal.

Former D-G of Rajasthan Police Dr MK Devarajan said that while he would not be able to speak on the issue, during his time he had seen gross misuse of TADA and had reported it to higher authorities.

Perhaps the draft needs to be relooked at again.