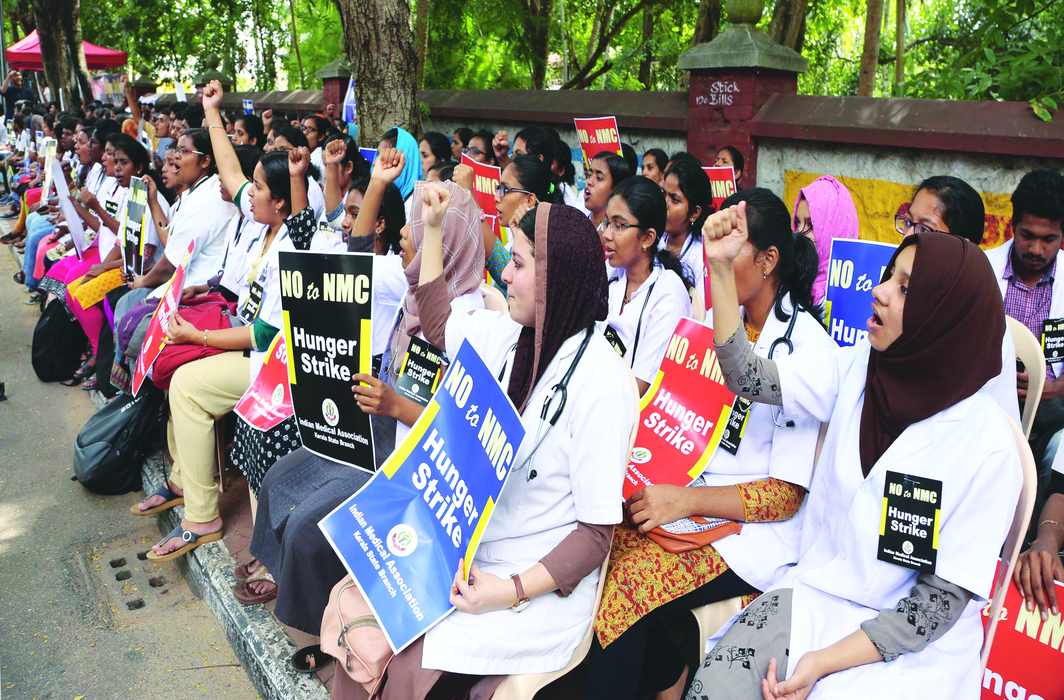 Hartals, the bane of Kerala, have dropped drastically thanks to strict conditions laid down by the Kerala High Court and tough administrative measures initiated by the government against violators

Despite the Kerala government using the tagline “God’s Own Country” to market it as a tourist destination, another catchphrase has caught the unfortunate reality of Kerala, for more than two decades now, and that is: “Hartal’s Own Country”.

The flimsiest of reasons is enough for political parties or communal outfits to call for a hartal, often without any notice. Kerala witnessed 363 hartals between 2005 and 2012. In 2017, there were 120 hartals, while in 2018, there were 98. The reasons are varied, ranging from social, political and economic factors, like fuel prices, the Sabarimala row and so on. In 2009, some organisations even organised a hartal to condemn the death by hanging of ex-Iraqi strongman Saddam Hussein.

Each hartal burns a Rs 2,000 crore hole in the state’s economy, the Cochin Chamber of Commrce and Industry (CCCI) has estimated. The worst hit has of course been Kerala’s massive Rs 30,000 crore tourism loss, as the negative impression has resulted in numerous cancellations of charter tours.

But change is in the air, thanks to the strict stand taken by the Kerala High Court and the belated but much acclaimed stance taken by Kerala’s political parties. Much to the relief of hapless citizens, the organisers of these hartals have finally realised that they will be made to pay a price for the mayhem unleashed during such strikes. The impact is for all to see. From 120 hartals in 2017, one every three days, 2019 saw 12 disruptions due to hartals. Of the 12 hartals, two were strikes called on an all-India basis by political parties that were converted into hartals in the state.

The welcome changes can be attributed to twin measures by the Kerala High Court and some administrative steps started by the state government. 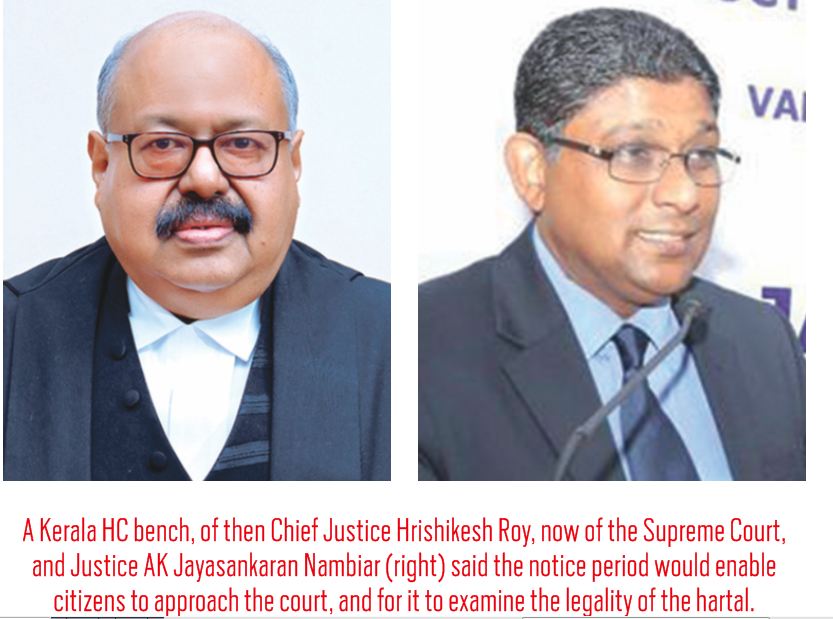 A Kerala High Court order of January 2019 specified a seven-day notice for political parties and individuals to call for hartal and general strike in the state.

A division bench of then Chief Justice Hrishikesh Roy, now of the Supreme Court, and Justice AK Jayasankaran Nambiar, said the notice period would enable citizens to approach the court with their objections and for it to examine the legality of the hartal call. It will also provide an opportunity for the state to safeguard the interests of the citizens, the court held.

Following this, the state government issued an ordinance making damage to property during hartals punishable, with punishment going up to life imprisonment.

In November 2019, legislation was enacted to curb vandalism during hartals and punish those who vandalise private property during strikes and charge heavy fines from them. The Act proposed to slap the accused with non-bailable offences and initiate revenue recovery proceedings to levy the compensation ordered by the court.

State Law Minister AK Balan who presented the Bill replacing the earlier ordinance, Kerala Prevention of Damage to Private Property and Payment of Compensation Ordinance 2019, however, reduced the minimum jail term proposed, from five years for perpetrators of violence using fire or other explosive materials to one year, when the Bill was passed. The maximum jail term has been set at 10 years.

It may be noted that there had been a central legislation, The Prevention of Damage to Public Property (PDP) Act, 1984, to curb hartals. In spite of the central Act, there was no effective rule to prevent damage of private property, the government had pointed out.

Social activist Dijo Kappen started his fight against hartals and blockades of public roads by political parties and religious outfits and festivals, some 20 years back. He incurred the wrath of several influential people, political parties, churches and other organisations for fighting for the right of hassle-free travel. According to Kappen, the fall in the number of hartals was due to the strict punitive measures ordered by the Court in case of loss of public and private property.

A classic example was the arrest of Dean Kuriakose, president of the Kerala Youth Congress, early last year. On February 17, 2019, two Youth Congress workers were hacked to death in Kerala’s Kasaragod district, allegedly by CPI(M) workers. The Youth Congress workers. Kripesh and Sarath Lal, were attacked while going home on a motorcycle. As the youths were very popular and also from impoverished family backgrounds, the reaction to the incident was spontaneous and almost all peace-loving people and those opposed to the CPI(M)-sponsored violence took the hartal call to heart. But the Court did not show any lenience to Kuriakose, who was made the main accused and held responsible for the losses incurred in the hartal. He was forced to appear in several courts on the same day either to avail of bail or to settle the damages prior to his filing of nomination for the Lok Sabha poll.

On December 14, 2018, the Bharatiya Janata Party (BJP) called for a state-wide strike in Kerala to mourn the death of an activist, who allegedly immolated himself at the Sabarimala protest site in Thiruvananthapuram, as a mark of protest against the government’s stand allowing young women’s entry to the Sabarimala temple.

A dawn-to-dusk shutdown in Kerala, called by the Sabarimala Karma Samithi, an umbrella organisation of various right-wing groups to protest the entry of two women into the temple on January 3, 2019, saw violence and stone-throwing incidents in various parts of the state. Another hartal was called when an Ayyappa devotee was stoned to death at Pandalam in Pathanamthitta district by CPI(M) workers while the former was participating in a protest against the government.

However, it was BJP state General Secretary K Surendran who faced the brunt of punitive measures when the government framed him in several hartal-related cases as the prime accused. He also had to move several courts seeking bail, before filing his nomination for the Lok Sabha poll.

It was on December 20, 2018 that over 35 trade organisations in Kerala came together to announce that 2019 would be an “anti-hartal year”. They had sound reason. The CCCI pointed out that the frequency of the hartals—otherwise known as bandhs—in Kerala was slashing thousands of crores from the state’s GDP every year. Delays due to hartals in shipments and transportation, supply chain interruption, and damage to inventory ultimately caused a huge slowdown in the economy.

“A hundred percent successful hartal means the entire state comes to a virtual standstill. Public transport system and private vehicles stop operating for fear of vandalism. Shops and educational institutions are forced to remain closed and exams are postponed because of fear of disruptions caused by hooligans,” says MM Hassan, former KPCC president, who had been vociferous in fighting the at-the-drop-of-a-hat hartal syndrome.

“Now the leader of the party or organisation which calls for a hartal is accountable for the losses incurred. The law enacted by the government and the strict posture adopted by the Court have turned out to be a deterrent against flash hartals. Whatever be the provocation, a hartal that sends life topsy-turvy should be the last weapon,” he reiterates.

At the same time, he said it was the ruling CPI(M) that was behind a majority of hartal calls in the state. But since the party returned to power in 2016, it has turned out to be inconvenient for it to call for a hartal against its own government. So they wait for nationwide strikes to jeopardise public life, Hassan alleges.

The tourism sector, a mainstay of the Kerala economy, has also been affected by the hartals. According to CCCI, some 50,000 domestic and foreign tourists were trapped indoors due to the state-wide shutdown on December 15, 2018. “Around 2,500 foreign tourists—mostly from the UK and Germany—who arrived by a chartered flight and four cruise ships were left in the lurch when Kochi shut down,” an official of the CCCI said. Besides the tourism sector, it is the informal sector that is most affected by hartals. Informal workers are forced to stay at home, and lose their day’s income.

The courts and hartals have for long been intertwined in Kerala. Protesters who brought life to a standstill in the state turned what were once called bandhs into hartals after a full bench of the Kerala High Court in 1997 banned bandhs.

Though the then Left government petitioned the Supreme Court to get the order reversed, the top court shot it down. To get around the law, bandhs were promptly renamed hartals. In 2000, the Kerala High Court ruled that the enforcement of a hartal by “force, intimidation—physical or mental—and coercion” was unconstitutional. This did not discourage Kerala’s politicians.

In 2015, the United Democratic Front government led by Congress Chief Minister Oommen Chandy introduced the Hartal Regulation Bill. It was referred to a select committee for consideration but has since been put on the backburner.

The litmus test of the state’s new approach towards hartals will be on January 8, 2020. The National Open Mass Convention of Workers, a forum of the 10 central trade unions, namely, INTUC, AITUC, HMS, CITU, AIUTUC, TUCC, SEWA, AICCTU, LPF, UTUC, and independent federations and associations of various sectors, including some independent unions, have called for a nationwide general strike against what are perceived as the anti-worker, anti- people anti-national policies of the Modi government.

The central trade unions have given a call for a general strike, citing the slowdown in the economy and the adverse effects of it on the workers in the unorganised as well as the organised sectors in the form of large-scale retrenchment and closures.

While it is unlikely that those in whose name the strike is being organised will gain anything out of it, one thing is certain: the state stands to lose over Rs 2,000 crore.