Above: Jagdeep Singh with his daughter Gauri Sheoran (centre)/Photo: twitter

IAS officer Ashok Khemka, who made a mark exposing the misdeeds of the high and mighty, turns his attention to a fellow bureaucrat who got his own children “cash awards” they weren’t eligible for

Conventional wisdom would say that after 52 transfers in his 28 years as an IAS officer, Ashok Khemka would have had enough and must be contemplating throwing in the towel. Far from that.

The 1991-batch senior bureaucrat, who had hit the headlines when he had cancelled the mutation of a land deal between Robert Vadra and DLF, is known for sniffing out scandals wherever he is posted. Just transferred for the 52nd time from the post of principal secretary of the sports and youth affairs department in the state, he has now been posted as principal secretary of the science and technology department. And this was shortly after he had exposed an alleged scandal in which a former director (sports), himself an IAS officer, had allegedly granted favours to his son and daughter.

An inquiry conducted by the Haryana sports department had indicted IAS officer Jagdeep Singh, who during his tenure as its director, had allowed “fraudulent claims” and given “excess cash awards” of about Rs 60 lakh to them—more than what they actually deserved. Both Gauri Sheoran and her brother, Vishwajeet Singh, are international-level shooters. Jagdeep, currently posted in the finance department of the state government, was transferred out of the sports department last year.

Earlier this month, a joint show-cause notice was issued to Jagdeep, Gauri and Vishwajeet, giving them an opportunity to return the “illegally gotten” government money. It said, “This is a case of misappropriation of government money involving the commission of various offences under Chapter XVII of the IPC and the Prevention of Corruption Act. Besides, you are liable to be debarred in future to receive cash awards or any other benefit, including government jobs…. However, an opportunity is hereby afforded to you to return the government money illegally gotten.”

The notice was issued after the departmental inquiry had recommended a case against the three on charges of criminal breach of trust, embezzlement and cheating besides various offences punishable under the IPC and the Prevention of Corruption Act. The inquiry found that as per records an “excess award money” of Rs 43 lakh was paid to Gauri and Rs 17 lakh to Vishwajeet during 2013-16 when their father was the director of the department. 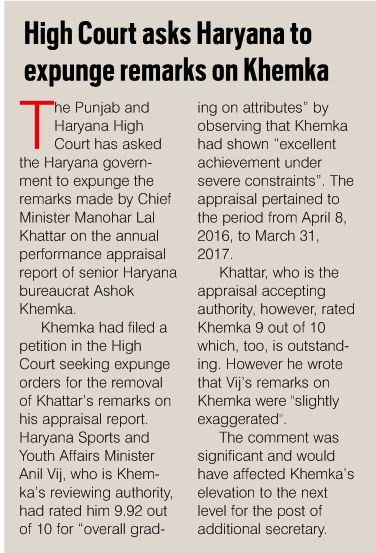 The inquiry had recommended that both Vishwajeet and Gauri, who had won the prestigious Bhim Award for sportspersons from the state, “may be directed to return the Certificate, Bhim statue, Blazer, Tie and Scarf” and “return the money illegally gotten with 12 per cent interest per annum”.

The report said that the prestigious Bhim Award was wrongly given to Gauri and Vishwajeet. A minimum of 50 points is required to be eligible to get the Award. It was revealed that while the scoring sheet of Gauri for the Bhim Award showed her having scored 84 points in the team category, her score as per the approved scoring scheme was only 37 points.

Similarly, in the case of Vishwajeet, his score sheet showed him having scored 60 points in the team category, while his score as per the approved scoring scheme was only 18 points.

The report further said that the inquiry committee found that the Bhim “application forms of Gauri Sheoran and Vishwajeet Singh” were “reported missing from official records”.

The report further said that the alleged modus operandi adopted by Jagdeep was “to obtain recommendations of a Committee consisting of subordinate officials of the Directorate, without bringing to the notice of the Government at any stage, while obtaining approvals that certain events and tournaments were not eligible for cash awards. There are cases, where more than one cash award were claimed for the same performance”.

The probe report was submitted by Khemka, then principal secretary, sports, to Sports Minister Anil Vij who approved the action recommended and sent the file for the final nod of Chief Minister Manohar Lal Khattar. Khattar then ordered the sports department to issue the notice to the three indicted by the inquiry committee.

The joint notice said: “You are hereby directed to show-cause regarding refund of the excess amount of Rs 60 lakh paid to Ms Gauri Sheoran (Rs 43 lakh) and Mr Vishwajeet Singh (Rs 17 lakh) with Interest at 12 per cent per annum.”

Jagdeep has, however, stoutly denied any wrongdoing on his part. Exuding confidence, he pointed out that the director of the sports department alone does not have the authority to nominate Bhim awardees. He also said that there are four layers of committees to scrutinise the performances and approve the list of winners.

The committees include coaches and senior officers who examine each case before deciding on the awards.

Jagdeep said that his children are the pride of the nation considering their achievements in shooting and there was no way they would cheat anyone—the government or the nation.

Regarding the probe panel’s comments on the Bhim Awards, he said that every player is given marks on the basis of individual ranking and team performance. He said an average of 1,500 players are given the awards each year.

In a latest development, the state sports department has decided to withhold future cash awards to the two shooters till the finalisation of the ongoing inquiry against the three.

These cash awards, which have now been withheld, are for championships from 2017 onwards in which the two had participated.

Jagdeep said that they have been given 15 days to reply to the notice and he would prove with facts and figures that there were no irregularities or misappropriation of funds by him. His children have, however, refrained from giving any comments.

Even though Khemka is now concentrating on the department of science and technology, in his last charge, as principal secretary, he has left a mark on the sports department. Time will tell whether the inquiry conducted under his charge would withstand the facts and figures the former sports director is able to provide to substantiate his claim that no wrong was committed.