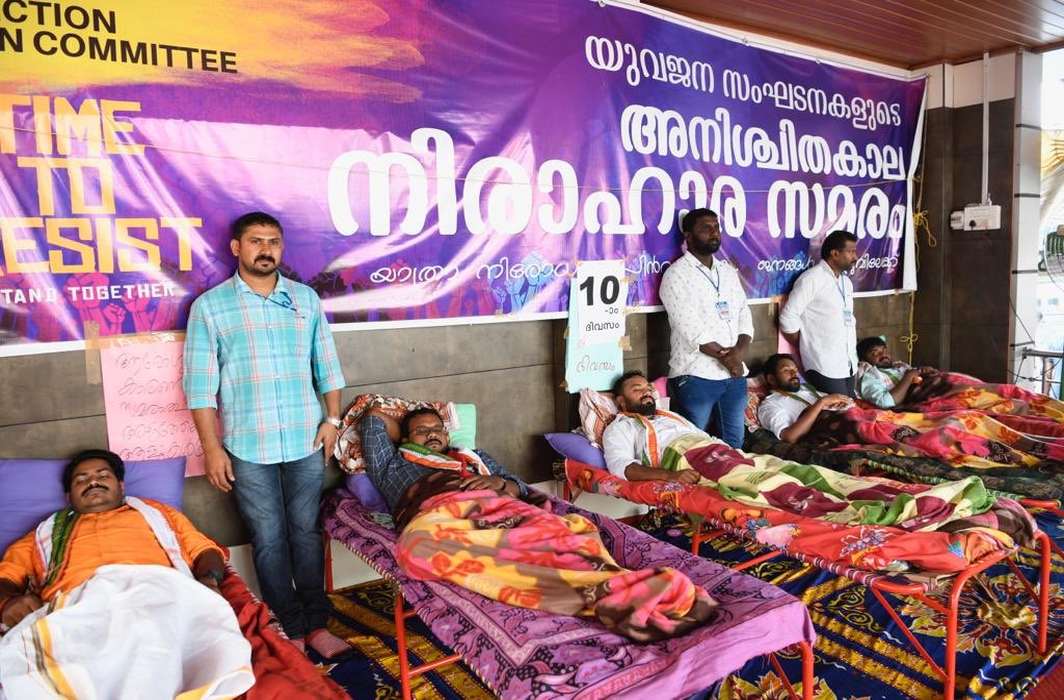 Above: Youth leaders on a hunger strike in Wayanad against the ban on night traffic on NH 766

Karnataka’s partial closure of a highway passing through the tiger reserve has led to protests as it will affect the livelihoods of hundreds of farmers supplying produce to Kerala. The ball is now in the Supreme Court

Yet another tiger reserve is in the news. Even as protesters in Wayanad called off their strike demanding lifting of the night traffic ban through Bandipur Tiger Reserve in Karnataka on the assurance of the Kerala government, it is unlikely to bring relief to the people affected by the ban.

While the Kerala government said it would take up the issue with the centre and the Supreme Court, it seems an uphill task. In September, the Court had directed the ministry of environment to find an alternative route in order to permanently close down NH 766 which passes through Bandipur.

The immediate cause of the agitation was a recent Supreme Court directive to the environment ministry suggesting the building of an alternative road so that NH 766 could be shut during the day as well. On October 1, thousands of students and farmers went on a protest march in solidarity with the strikers. The agitation hogged national headlines when Wayanad MP and Congress leader Rahul Gandhi visited the protesters and offered his support.

Before the ban on night traffic was imposed, there were instances of wildlife being disturbed and even killed on the 19-km stretch of NH 766 in the core zone of the Reserve. While the Karnataka government took a stern stand supporting the night traffic ban, Kerala is trying to impress upon the centre the need for lifting it.

It was on June 3, 2009, that the deputy commissioner of the forest wildlife division, Tiger Project, Bandipur, passed an order under the Motor Vehicles Act prohibiting night traffic on NH 212 (now NH 766) between Gundlupet in Karnataka and Sultan Bathery in Wayanad and NH 67 between Gundlupet and Ooty to provide wild animals a reprieve from vehicle movement. The ban was from 9 pm to 6 am for regular vehicles and 6 pm to 6 am for two-wheelers. But on June 10, 2010, the order was lifted, citing the inconvenience caused to the people. In 2010, the Karnataka High Court reinstated the ban on a petition filed by the state government.

Out of the 34.6 km of highway passing through the Bandipur and Wayanad National Parks, the road cuts through 19.7 km of the core zone of Bandipur and 4.5 km of its buffer zone. Bandipur is home to about 140 tigers, more than 1,500 elephants and over 25,000 deer and is one of the oldest tiger reserves in India.

Though several rounds of talks were held between the chief ministers of Kerala and Karnataka, they could not resolve the issue as the latter was firm on its decision about the night traffic ban. Karnataka went on to construct an alternative road at a cost of Rs 75 crore for Kerala. When Kerala challenged the ban in the apex court in 2018, the Court constituted a committee to study the issue, which recommended continuation of the ban. In May 2019, the centre filed an affidavit in the apex court recommending the continuation of the nine-hour traffic restrictions. In September 2019, the Court upheld the ban.

The Kerala government has already put forward a proposal to the Ministry of Road Transport and Highways to construct five elevated sections, four of which will be in the Bandipur core zone and one in Wayanad. It had even offered to share 50 percent of the Rs 500 crore cost estimated for the elevated sections. Alternative routes like SH 90 and NH 275, suggested by the NHAI and Karnataka, will increase the distance to Gundlupet. “For people in Sultan Bathery, the distance to Mysuru increases from 98 km to 217 km as they have to first travel 37 km to Mananthavady to start the journey,” said Suresh Thaloor, general convenor, NH 766 Transport Protection Action Committee.

Those affected by the night traffic ban include daily wage labourers from Karnataka, college students, farmers and tourists. However, the Prakruti Samrakshana Samiti’s Wayanad president, N Badusha, expressed disappointment over youngsters also joining the protest. He said that the protest at Sultan Bathery against the traffic restriction on NH 766 cannot be considered a reaction by the whole of Wayanad. “Lobbies with vested interests representing ginger cultivators, resorts, hawala racketeers, gold traffickers, merchants and religious communities are behind it,” he told mediapersons.

Political parties across the spectrum are in favour of lifting the ban. Congress leader Rahul Gandhi said the ban had caused hardship to lakhs of people in Kerala and Karnataka. “I urge the central and state governments to safeguard the interests of local communities while upholding our collective responsibility to protect our environment,” he tweeted.

Kerala CM Pinarayi Vijayan spoke in favour of an elevated highway through the National Park connecting Wayanad and Mysuru. “Rahul Gandhi has assured his support to the government of Kerala with regard to the proposal of constructing an elevated corridor through Wayanad-Bandipur forest area,” Vijayan said in Delhi after holding talks with him.

In fact, the ban affected the people of Wayanad, Kozhikode and Malappuram districts in Kerala. Kerala Transport Minister AK Saseendran said Union Environment Minister Prakash Javadekar had promised to constitute an expert committee to study the issue in detail. The view of the majority people is that status quo should be maintained—continue the night traffic ban while allowing daytime traffic. Permanent closure of the road will definitely affect the economic activity of people living in a large area.

Though Karnataka has said it will oppose any move to revoke the night traffic ban, the stir in Wayanad against the move to completely close the road is finding resonance in the border villages of Gundlupet and Nanjangud in Karnataka. Many organisations and farmers are crossing the border to support the stir. Vegetable farmers from Gundlupet and Chamrajanagar feel that complete road closure will cut off their main markets in Kerala.

The livelihoods of hundreds of farmers, who supply produce to Kerala markets, will be hit if NH 766 is closed. Around 300 truckloads of vegetables from the border villages in Karnataka are transported through NH 766 to Wayanad, Kozhikode and Malappuram each day. On a daily basis, over 4,000 tonnes of vegetables are brought to Kerala.

“The very existence of towns in Karnataka, from Gundlupet to Nanjangud, is under threat. The closure of the NH cannot be accepted,” said Narayan Gowda, a farmer from Gundlupet.