Above: The number of death penalty awarded for child rapes in MP is striking (representative image)/Photo: UNI

Mahendra Singh Gond of Satna district, the convict who raped a 4-year-old girl, was close to becoming the first man to be hanged under the new law providing for death penalty to child rapists. He was to be executed on March 2 in Jabalpur central jail. The Satna district and sessions court had issued a death warrant for the convict. Later, the Madhya Pradesh High Court upheld the sentence. However, a three-judge bench of the Sup­reme Court headed by Chief Justice of India, Ranjan Gogoi, stayed the death sentence on February 15.

Gond, a 25-year-old schoolteacher, is among the 23 convicts awarded death sentence by various courts in the state  for raping and murdering minors in the last one and half years.

The London-based World Book of Records has already recognised and awarded the state’s prosecution directorate for maximum capital punishments. The prosecution officers have earned PM Modi’s praise several times for securing death sentences from courts for such “Pishach(s)” (devils) in “five-five days or a week” of the crimes being committed.

However, barring one, none of the capital punishment cases has reached the High Court level. Execution is still a far cry. The cases have to move several legal ladders, not to mention the President’s clemency power, and this process will take years. How many of these cases will be upheld or quashed or changed into life imprisonment is in the realm of conjecture.

The High Court order upholding the death sentence of Gond was passed by a division bench, which went along with the order of the trial court at Uchehara town in Satna district that had awarded the capital punishment on January 25, this year. Earlier, a Sessions Court in Nagod had sentenced Gond to capital punishment on September 19, last year. The survivor’s statement which was recorded through video conferencing was crucial in proving the school teacher guilty.

According to the prosecution, the convict had raped the minor girl after kidnapping her from her house in a village in Satna district on July 1, 2018 in an inebriated condition. He later dumped her in the bushes. Gond was arrested within a few hours.

After the girl’s family found her, she was rushed to a hospital. The girl was violated so brutally that the state government decided to airlift her to Delhi so that she could be treated at AIIMS. The minor underwent several injuries in a month to get her intestines realigned.

Even as trial courts’ death sentence verdicts are awaiting hearing in the High Court, the prosecution directorate of Madhya Pradesh is eyeing four “world records” it believes it created in 2018—maximum number of death sentences secured in one calendar year (21), fastest trial that resulted in capital punishment (five working days in a case in Katni), fastest trial that led to life imprisonment (three days, in Datia) and the fastest trial in juvenile court (one day, in Ujjain).

Rajendra Kumar, director, public prosecution, Madhya Pradesh, says that these records will be difficult for any country to achieve. He gives credit to better teamwork, focused approach and proper strategy of the state prosecution department.

Talking to India Legal, he also mentioned that another world record has also come to the directorate for launching e-Prosecution mobile App he had introduced a year ago. The award was given to Kumar at a function in the presence of World Book of Records, London, president Santosh Shukla in Indore, last month. The App is a work evaluation system of the prosecution staff. Marks are given to every prosecution staff based on app-based evaluation and awards are announced at the end of the month. The App tracks the daily activities of the 1,000-odd government prosecutors across the state.

The reward system provides for 1,000 points for a death sentence, 500 for lifer and 100-200 for maximum punishment in lower courts. The directorate also honours “best prosecutors” and “pride of prosecution” every month to those who have collected over 2,000 points. Those who fail to get more than 500 points per month are strictly warned to improve their performance. Prosecutors keep a daily log in the
e-Prosecution App for each activity—from filing new case to examining witnesses.

“The application has reduced pen work. Officers across the state update their daily work schedule, which helps in keeping tabs on their work record,” says Kumar. The 1984-batch IPS officer said that he thought of launching the App in the wake of alarming rise in incidents of child rape and murders. Rattled over the massive uproar following the rise in heinous crimes, the then chief minister Shivraj Singh Chouhan announced to bring a bill providing death sentence to child rapists.

In December 2017, Madhya Pradesh became the first state in India to pass a Bill providing death penalty for rapists of girls aged 12 or below. The government passed the Bill after the latest National Crime Records Bureau report showed that the state had witnessed the highest number of rape cases in the country in 2016.

Even as MPs bill was pending with the president, in April 2018, the centre issued an ordinance providing death for the rape of minors. In July, the Lok Sabha passed the Bill, which also puts a two-month deadline on the trial of rape cases, and a six-month time limit for disposal of appeals. The law also precluded provision for anticipatory bail for a person accused of rape or gang rape of a girl less than 16 years. Since the Bill was adopted, MP’s trial courts began to award capital punishment with amazing rapidity.

In some cases, the district bar associations officially passed resolutions not to plead cases of an accused in child rape.

Senior advocate Avinash Sirpurkar, amicus curiae in the High Court, says, “I don’t think this has ever happened in the history of MP”. While citing a case of Naveen alias Ajay Gadke of Indore, he says that the accused did not get a fair chance. Gadke, 26, was arrested for raping and killing a three-month-old girl on April 20 and given death on May 12, 2018. (see box)

Since June last year, nearly 1,000 public prosecutors in the state have been competing with one another to secure maximum punishment in criminal cases they plead in courts. The competition is frenzied because the more convictions they secure, the more marks they get and it is marks that have come to matter most for the furtherance of their career prospects.

“They are competing with each other to score maximum points. With the reward system in place, prosecutors now go the extra mile to log more points,” says Kumar. He is confident that the higher courts will acknowledge and uphold “due diligence” his prosecutors exhibited in securing death sentences in trial courts. 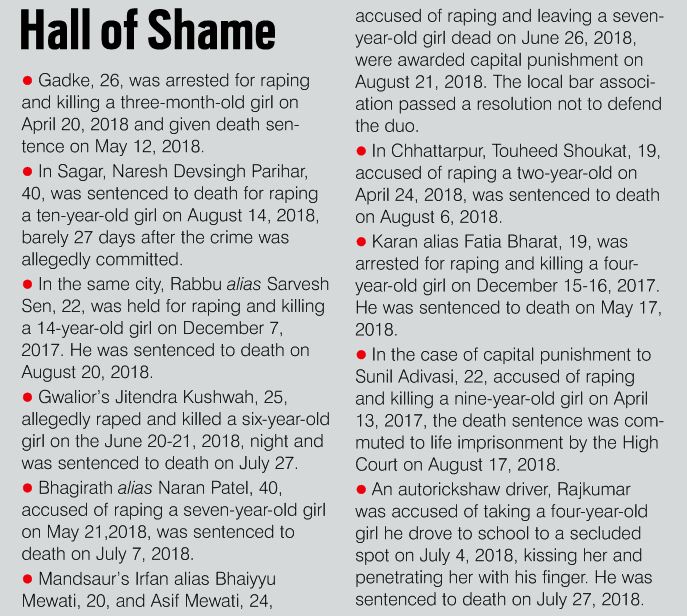 Competition for earning more marks has indeed improved conviction rate from 20-25 percent till 2017 to over 60 percent, claims Kumar. “Conviction rate has gone up to as high as 61 percent in IPC cases and even higher in criminal cases under CrPC and other acts,” he further claims.

Anupam Pathak, assistant public prosecutor posted in Jabalpur, says before the system was introduced, prosecutors sorely lacked motivation to pursue cases in hands. “Now they are conscious about the price they might have to pay if they don’t work diligently”. However, some prosecutors say the system is unjustly frightening as they feel tremendous pressure to secure convictions, regardless of how strong or weak the cases have been made out at the police investigation level.

A district prosecution officer, who wishes to remain anonymous, laments that the system is fraught with the risk of prosecutors making false submissions even at the cost of fairness of the trial. It is the police’s investigation and evidence-gathering mechanism that ensure convictions, he says.

Senior High Court lawyer Aseem Dixit, who has been a government advocate, feels it is inherent in the tracking system that prosecutors compromise with their independence from police but they seldom, if ever, exercise that independence any way.

Another flaw in evaluating prosecutors based on convictions is that many of their “successes” could just be reversed in higher courts. Government lawyers at appellate stages—in High Courts and Supreme Court— change and the prosecutor who secured a conviction initially will reap benefits even if the ruling is subsequently thrashed.

Kumar seeks to dismiss such apprehensions. “In the case of reversal of verdicts, prosecutors’ marks could be deducted and benefit snatched but that will happen only when the higher courts set aside the verdicts with passing strictures”.

Senior advocate and renowned criminal lawyer Rebecca John has been quoted by a news portal as saying, “This scheme is a serious abnegation of all constitutional principles settled over decades by courts of law, and poses a direct threat to the fundamental right to life and liberty.”

The spate of capital punishments, however, has not helped abate rapes in the state. It still continues to bear the egregious tag of being top in rape cases in India.