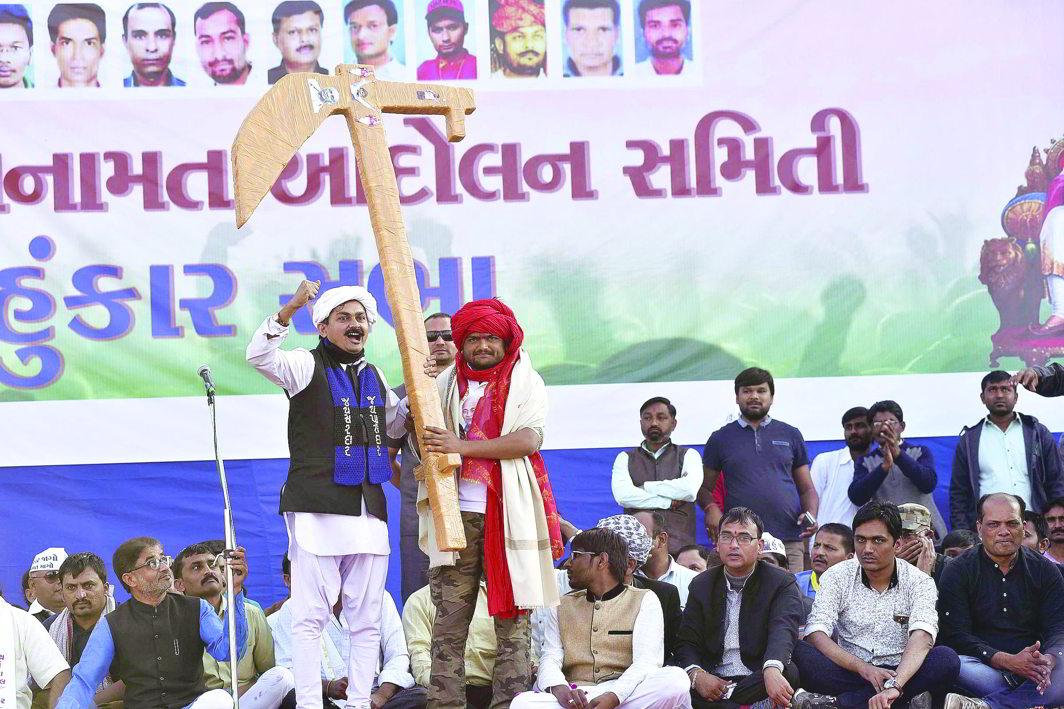 Above: Hardik Patel (in red turban) at a Patidar rally in Gujarat. Photo: UNI

With the Patidar community constituting 14 percent of the population of Gujarat, it is being wooed by political parties with promises of greater reservation. Do they really deserve such concessions?

Back in the 1980s, the Patidar community in Gujarat staged massive anti-reservation protests. Now, politics and a no-holds-barred election has turned the issue on its head. Hardik Patel, convener of the Patidar Anamat Andolan Samiti (PAAS), and a festering thorn in the side of the ruling BJP, has raised the demand for reservation for the community in educational institutions and government jobs. With his whistle-stop campaign and substantial following, it is a demand the party and the state government cannot ignore. Under pressure, the BJP government had even introduced a 10 percent quota for the economically weaker sections on May 1 last year through promulgation of an ordinance. It was challenged in the High Court, which, on August 8, struck it down. The issue was thus again in the open, with Hardik saying he would not mind supporting the Congress if it was able to convince his outfit that it would work to bring about reservation for the community if it came to power.

The Congress came up with a formula that was placed before PAAS representatives at a meeting convened by legal eagle Kapil Sibal at the Gujarat Congress headquarters in Ahmedabad last week. Prima facie, it is believed, PAAS sees it as its best bet in the given circumstances.

The formula entails a separate quota for Patidars under Articles 31(C) and 38(2) of the Constitution, apart from the existing 49 percent quota for reserved categories in the state. The new law is reportedly expected to bring in 20 percent reservation in the state. Legal opinion within the party is that the assembly can straightaway pass the law and send it to the president for his assent. All benefits awarded under the new law will be on a par with OBC reservations.

Constitutional experts feel that while it may be feasible, there are many ifs and buts in taking this route. “It’s an arguable matter,” says noted lawyer Girish Patel. “While provisions exist, these are open to interpretation and any such enactment will need presidential assent. In a politically polarised atmosphere, there is an upside and a downside to this aspect as well.”

Senior lawyer Krishnakant Vakharia also feels that there is many a slip between the cup and lip, but points out that if the president doesn’t give his assent, he will have to give sufficient grounds for it. “The presidential right is not absolute in as much as he will have to provide reasons for doing so,” said Vakharia.

However, both experts agreed that such an enactment will definitely be challenged in the Supreme Court, which is not keen to extend reservations beyond the limits set by it.

Senior lawyer Sudhir Nanavati feels that the idea is nothing but absolute illusion. He says: “If we look at the decision of the Supreme Court on the Rajasthan government’s increasing reservation for other backward classes, it clearly mentioned that the total reservation cannot cross 50 percent. Now, in the 49.5 percent of total reservation about 20 percent is reserved for SCs and STs. No one can touch this. The rest can be tweaked and if that happens, the existing beneficiaries will not like it. Why would they accept a cut in their share? And bringing it through the assembly is something very challenging and ultimately will lead to nowhere. So to me it is not legally tenable.”

Patidars in Gujarat constitute a very influential and economically well-off caste grouping. After former Congress chief minister Madhavsinh Solanki created the KHAM (Kshatriya, Harijan, Adivasi, Muslim) caste formation to win a record 149 of 182 seats in 1985, the Patels chose to cast their lot with the BJP, ensuring their steady rise in the state’s power structure. Except for a 16-month break when their senior leader, Shankersinh Vaghela, broke free to form his own regional outfit and come to power with Congress support, they have been with the BJP. 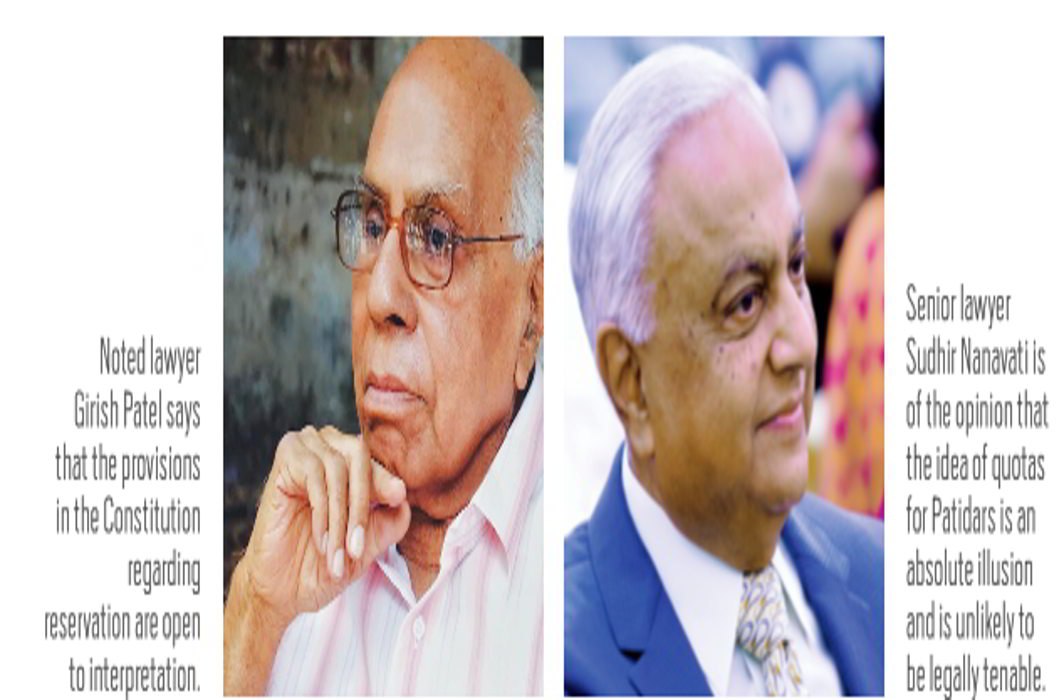 The Congress was last elected to power in 1985, 32 years back. If Hardik and his caste members switch to the Congress, what would be the loss to the BJP? The Patels constitute 14 percent of the total 63 million population of Gujarat and 21 percent of its voter population. When Anandiben Patel of Patidar stock became the first woman CM of Gujarat, seven of the 24 ministers in her cabinet were Patidars and 42 of the total 182 legislators were from the same community. It was against this backdrop that when sedition cases were filed against Hardik in 2015, the community decided to provide a glimpse of its true power by switching sides to a Kshatriya-dominated Congress.

The Congress chief in the state was Bharatsinh Solanki and the legislature party leader Vaghela. Though the BJP managed to retain all the six municipal corporations, albeit with a whittled down majority, the Congress swept the taluka and district panchayats, bagging 132 and 23 seats, respectively, as against the 39 and one it had held before. The BJP, which controlled 30 of the 31 district panchayats in 2010, was down to six and in taluka panchayats, down from 190 to 73.

It is this backdrop that provides a clue as to why the Congress is desperate to gain the support of the Hardik-led Patidar youth. And also why the BJP is working overtime to corrode the credibility of Hardik who has acquired a cult status among his community’s youth. In order to dent his status, two sex CDs, allegedly of Hardik, hit social media in quick succession. Hardik and the Congress say it is the handiwork of the BJP. “Such CDs won’t deter me from my mission which is to get reservation for my clan. I am prepared to consort with the devil for it,” Hardik said.

At a news conference on November 16, PAAS alleged that the BJP leaders were behind these sleaze videos. “There are 52 more sex CDs of PAAS leaders, with 22 of Hardik, prepared by the BJP under instructions from Chief Minister Vijay Rupani and state BJP leader Jitu Vaghani,” a PAAS statement said. “They have spent over Rs 40 crore to get these CDs made abroad and used morphed images to show Hardik and other PAAS leaders,” Dinesh Bhambhaniya, a PAAS leader, told mediapersons. He added: “We have information that the BJP leaders are trying to frame Hardik by getting a woman to lodge a rape complaint.”

Meanwhile, Hardik has appealed to people through a CD to uproot the BJP lock, stock and barrel. “Knock them out,” it says. Thus, the reservation issue has become a key point in the larger political game in Gujarat. 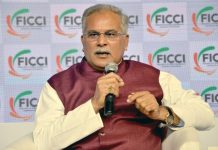