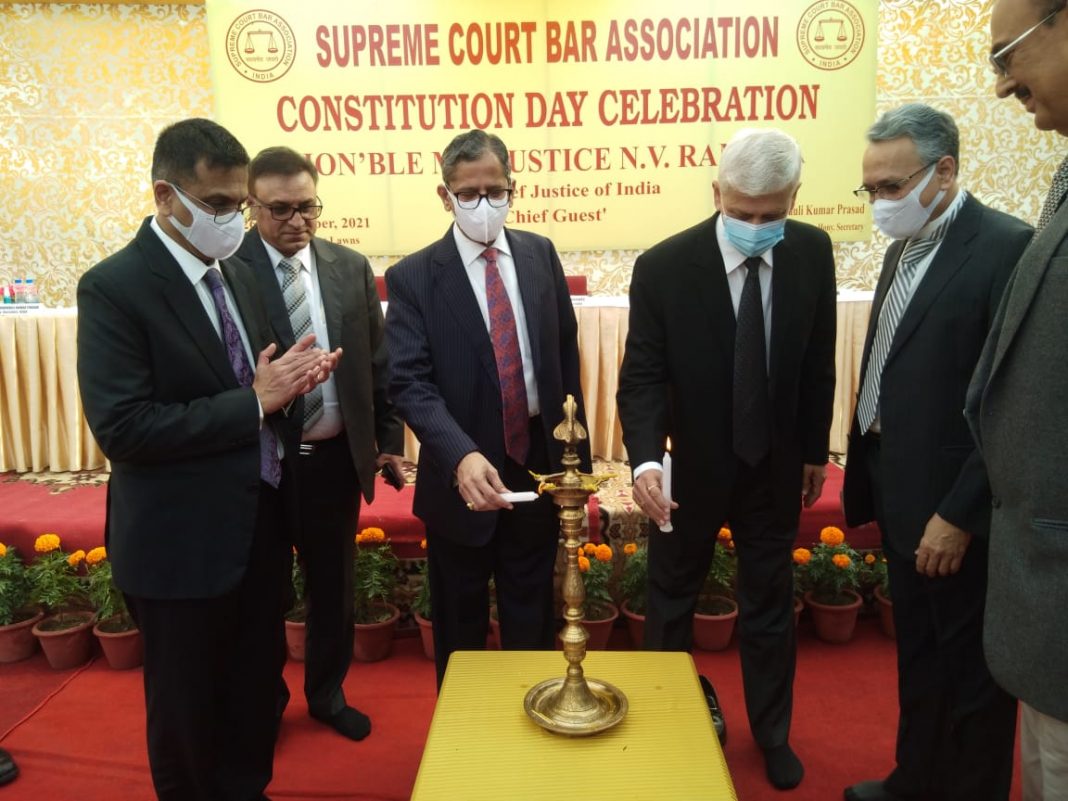 Chief Justice of India Justice N.V. Ramana urged the legal fraternity and young lawyers especially that they must assist judges and the institution. Protect the institution from motivated and targeted attacks, he said. “We are all ultimately part of one large family. Do not shy away from standing up for what is right, and against what is wrong.”

Speaking as the Chief Guest at the Constitution Day celebrations on November 26 organised by the Supreme Court Bar Association, Justice Ramana expressed his delight at being part of the legal fraternity.  “I am happy to be a part of the legal community, which has given so much to the freedom struggle and played such an integral role in the drafting of the Constitution. None can forget the contributions of lawyers such as Mahatma Gandhi, Dr. B.R Ambedkar, Jawaharlal Nehru, Lala Lajpat Rai, Sardar Patel and Alladi Krishnaswamy Iyer, whose dedication and sacrifices for the cause of the people are legendary. All of us here are successors of that glorious legacy.”

Addressing the young members of the bar in the context of the SCBA’s honouring of Senior Advocates Ramesh P. Bhatt, A.P.S. Ahluwalia, Satya Prakash Singh and Advocates Mohammed Z. Choudhary and Krishna Prasad for completing 50 years as advocates, Justice Ramana said, “Please respect and pay due regards to your seniors. They have immense experience, knowledge, and wisdom which no amount of book learning can provide. Learn from their example, and keep the flag of the legal profession flying high.”

Solicitor General Tushar Mehta in his address said he would say a few words on behalf of Attorney General K.K. Venugopal, his senior. He spoke on the significance of there being a written and robust Constitution and there being a Constitution having in-built checks and balances.

“When a common man feel injustice and moves corridor if this court or any court and the court takes cognizance, he realises the significance of the Constitution,” Mehta said.

Speaking at the gathering, SCBA Vice President and Senior Advocate Pradeep Rai emphasized that lawyers need mediation training and the Courts are protecting liberty and the rights of the citizenry. Rai said the Supreme Court Bar Association is thankful for the initiative of the Court to provide mediation training to lawyers.

“From its very inception, the Supreme Court Bar Association has been in the vanguard of the movement for upholding, maintaining and consolidation of the constitutional values of democracy, rule of law and independence of Judiciary,” he said.

Speaking on the peoples’ trust in the judiciary, Senior Advocate Rai said,

“Every honourable judge in the higher judiciary is referred to as “Justice”. This is a sign of complete faith in their integrity and legal acumen to render justice to all, despite all odds. If we look at the balance sheet of the functioning to the judiciary under the Constitution of India, we can say with pride that there are several achievements in interpretation and expansion of basic rights.”

Senior Advocate Vikas Singh, the SCBA President, pointed out the importance of law makers and highlighted, “Law Breakers Shouldn’t Be Law Makers.” “That is something which is a very important area of concern which we should all deliberate on this Constitution Day as to whether it was intended that people charged with serious crimes who were 23 percent of Parliament in 2004 had now swelled to 43 percent today. That was something the Constitution-makers had not thought of,” he said.