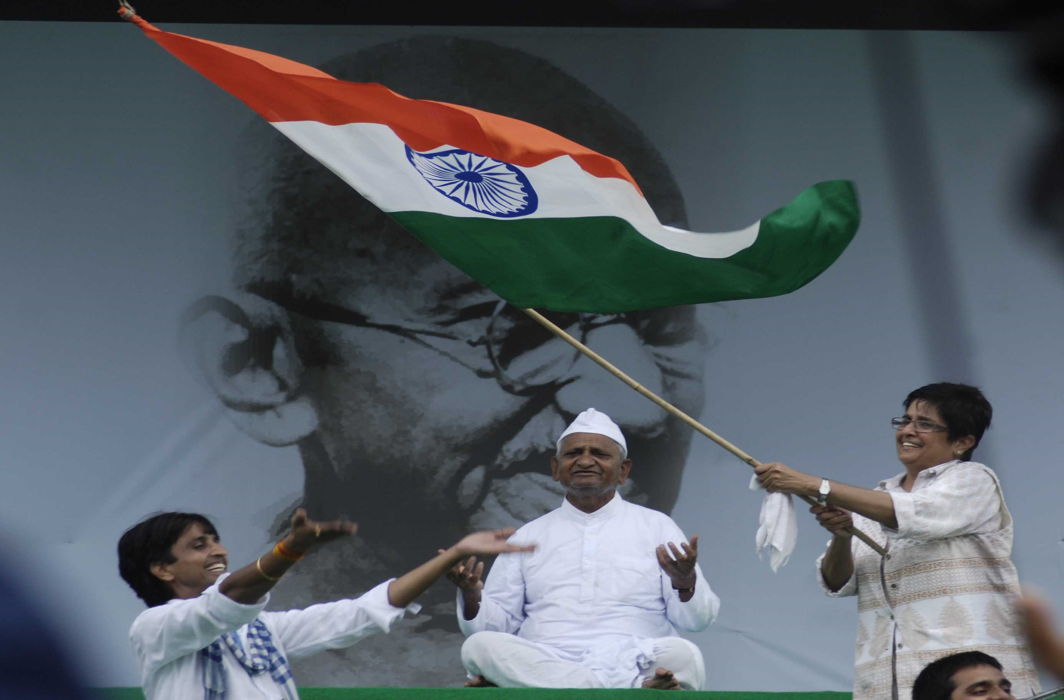 Above: Despite the India Against Corruption movement at Delhi’s Ramlila Maidan in August 2011, the Lokpal and Lokayuktas Act, 2013, was further diluted in 2016 and a Lokpal is yet to be created/Photo: Anil Shakya

When the Rajya Sabha recently passed the Bill to amend the Prevention of Corruption Act, 1988, the NDA’s spokesperson triumphantly announced: “It is a historic anti-corruption legislation to check graft in the country.” Close on the heels of demonetisation of large currency notes, the NDA considered this a game-changer in its ostensible campaign against corruption.

After the UPA government introduced the Bill in 2013, two parliamentary committees examined the Bill thoroughly, having the benefit of the Law Commission’s considered advice. The Bill in its present form will now go to the Lok Sabha before it can become law.

There are several positive features of the Bill that need to be highlighted. In the original Act, a bribe giver could be prosecuted only as an abettor of the offence. Present amendments treat the “bribe giver” also as an offender. The Bill also recognises public servants coercing helpless persons into bribing.  It provides relief to the bribe givers in such cases.

The original Act treated even a non-pecuniary benefit unduly acquired as illegal gratification. The latest Bill clarifies this, so as to remove the ambiguities that could hinder prosecution. The original Act had no provision for prosecuting bribe-giving private companies, except as abettors. The present Bill fills that gap eminently.

In both the original Act and the present Bill, there are provisions to protect public servants at decision-making levels from undue harassment. Section 19 of the original Act stipulates that no court shall take cognisance of an offence punishable under the Act, except with the prior sanction of the appropriate government. In 1969, the then government issued an executive directive that, even for initiating an investigation against a public servant at the level of joint secretary and above, prior sanction from the competent authority would be necessary. In Vineet Narain & Others vs Union Of India, the apex court, on December 18, 1997, struck down this directive on the ground that it was discriminatory. Therefore, as far as the original Act is concerned, there is no need for prior sanction for investigation.

While it is desirable to protect honest public servants from undue harassment, it is public knowledge how dishonest officers, in collusion with both the political executive and senior bureaucracy, have often exploited the safeguard provided in Section 19 of the original Act to delay and escape prosecution. The present Bill, no doubt, sets a time limit for sanction and for prosecuting the offenders in special courts. However, the stipulation that prior sanction is required even for investigation is worrisome. In most cases involving large-scale economic offences, while there may be no explicit bribe giving as such, a comprehensive investigation alone can reveal illegal benefits of a large magnitude, both tangible and intangible, accruing to public functionaries. An unethical political executive or an equally unethical senior civil servant can misuse this provision to thwart the investigation in its initial stages and cover up the scam. Through Section 17A in the Bill, the government has perhaps undone whatever it has ostensibly been seeking to achieve in the name of campaigning against large-scale corruption.

The present Bill needs to be viewed in the overall context of what the NDA government has so far done in terms of its anti-corruption campaign. It touted demonetisation as its flagship measure against corruption and black money but the outcomes do not justify this.

The Lokpal and Lokayuktas Act, 2013, enacted during UPA rule, was in itself a far cry from what Anna Hazare and his associates in India Against Corruption sought in the form of a “Jan Lokpal Bill”. This Act, which required public servants to declare their assets as well as those of their families, was further diluted by the NDA government in 2016 to grant exemption to the families of public servants. The Lokpal is yet to be appointed.

In the absence of it, investigating agencies of the central government continue to be subservient to the political executive. Even if the amended Prevention of Corruption Act was to provide deterrent penalties to be imposed on the offenders, it is doubtful whether pliant investigating agencies would be allowed to carry out their investigations objectively and bring the real culprits to book.

A genuine campaign against corruption should primarily address electoral corruption that sets the tone of governance in any country. Corporate donations to political parties are a euphemism for political corruption as they invariably involve quid pro quos. Instead of addressing it in a forthright manner, the NDA has gone several steps backwards by amending the Companies Act to lift the ceiling on company donations and introducing a highly non-transparent system of electoral bonds to provide anonymity to the donors and donees. It has further amended the Foreign Contributions Regulation Act (FCRA) retrospectively to permit larger inflows of foreign funds into political parties’ coffers. Most political parties, including the BJP and its allies in the NDA, have so far not submitted themselves to the stringent requirements of the RTI Act. The NDA, on the other hand, is now trying to dilute the provisions of that Act.

While pushing forward the latest amendments to the Prevention of Corruption Act, the government has occasionally drawn strength from the requirements of the UN Convention Against Corruption. A glance at that Convention shows how it also requires several parallel measures to contain corruption such as upholding the independence of the judiciary, enhancing transparency in decision-making by promoting civil society participation in it at different levels and so on. Recent developments in India show how evasive successive governments have been in complying with such primary requirements.

Any campaign against corruption can succeed only when those in the government modify their mindset, uphold democratic processes, enhance transparency in governance, devolve authority and decentralise decision-making. Legislative measures in incoherent bits and pieces will not do.

—The writer is a former secretary to the Government of India