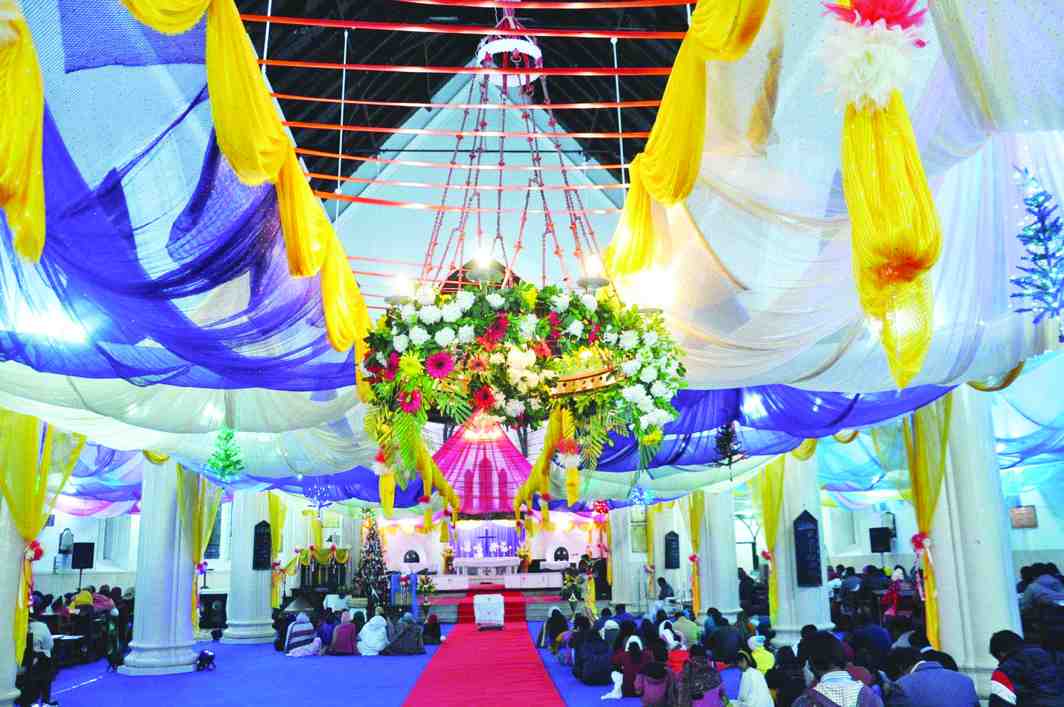 Above: Devotees attend mass on the eve of Christmas in Ranchi, Jharkhand. Photo: UNI

In a bid to stop the missionary juggernaut in tribal-dominated areas, Jharkhand became the seventh state to pass an anti-conversion law with stiff penalties and a jail term

From all accounts, it would appear that anti-conversion laws in India are a race to woo, win and occupy the tribal soul. The string of seven states—MP, Rajasthan, Chhattisgarh, Himachal, Arunachal, Odisha and now Jharkhand—which have enacted anti-conversion laws are home to almost 90 percent of the tribal population of the country and also where Christian missionary activity is supposed to be at its peak. Besides these states, Gujarat, Andhra and Tamil Nadu have also enacted similar anti-conversion bills, but these have since been either repealed or put in abeyance due to lack of gubernatorial consent.

The most recent case has been in Jharkhand where the assembly passed what has been called the “Religious Independence Bill 2017”. The Bill has provision for a fine up to Rs 1,00,000 and a four-year prison term for those who convert others through force, fraud or allurement. It also states that a person converting willingly must give a notice to the respective collector of the district with details of time, place and name of the person administering the conversion at least 15 days in advance. Without this notice, the administration will be free to interpret the conversion as having been done by “force, fraud or allurement”, all of which have been defined in the Act.

There is little doubt that the Act is aimed at stopping the missionary juggernaut which rolled into the Chota Nagpur plateau almost a century ago. The BJP is making little effort to hide the purpose behind the Act and opposition by church leaders and former Chief Minister Stephen Marandi has drawn the lines more clearly. The Archbishop of Ranchi, Telesphore Toppo, of the Roman Catholic Church, has gone on record rejecting the necessity for such an Act and stating that provisions under Section 295 of the IPC are enough.

Some telling figures explain why the BJP government under Raghubar Das may have felt compelled to act. As per the 2011 census, the Christian population in Jharkhand has risen by a whopping 29.7 percent in the last 10 years, followed by that of Muslims at 28.4 percent, while the Hindu population has been the slowest at 21 percent. Remarkably, the overall incidence of Christianity amongst the tribals is only at 4-5 percent. An overwhelming majority of tribals practise nature worship. 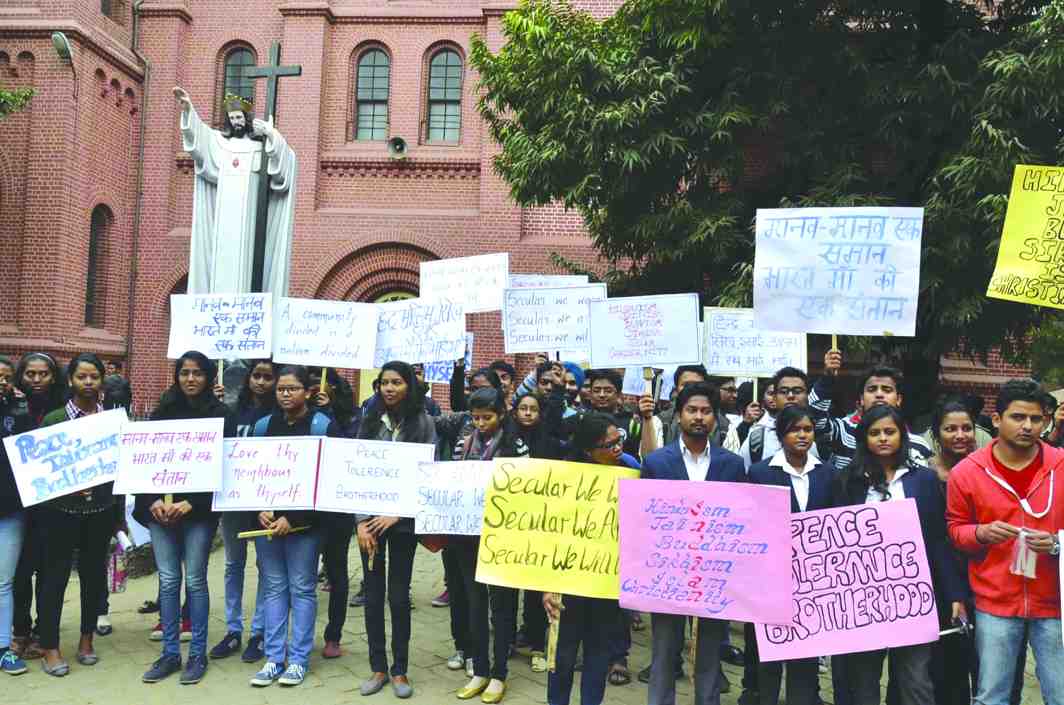 The struggle to smother missionary activities in Chota Nagpur is almost a century old. Kunkuri in the neighbouring district of Jashpur (Chhattisgarh) houses the biggest church in Asia. The Jashpur royals, led by Dilip Singh Judeo, have made a place within the RSS-BJP leadership with their re-conversion dubbed as ghar vapasi activities for almost 50 years now. Ranvijay Singh has taken over the mantle from his uncle Dilip and is now the youngest Rajya Sabha member from Chhattisgarh. But even before that, in the 1930s, Raigarh and Sarguja states ordained anti-apostasy laws to check the spread of Christianity amongst the tribals.

What is it then about the church that intimidates the defenders of the Hindu faith? Though the law covers all religious expansionism anywhere in the state, it is primarily directed at the church and the tribals. For one, the church is the most organised. It has a faithful following and they generally do the church’s bidding and this includes committed en masse voting.

The infrastructure around each church—schools, colleges, hospitals and more importantly, the committed who serve in these institutions—is something any organisation would be proud of. Though the Christian population of Jharkhand is only 4 percent, it has been accused of fanning the rebellion against the land acquisition acts that Das’ government tried to bring in through the Chota Nagpur land tenancy reform bill. The government realises that the church uses every opportunity to become the defender of the rights of tribals. And though an overwhelming number are not practising Christians, the focal point can only be provided by an organised institution like the church with its own pecking order. Thus, whether it’s the Archdeaconry or the Rashtriya Isai Mahasangh (RIM), the church leaders frequently meet the decision-makers and put forward their stand.

Another striking feature of these religious freedom acts has been the abysmal number of times that people willing to get converted have approached the administration. The police have been lax whenever a mass conversion drive like Dalits converting to Buddhism takes place. “I have yet to receive an application for conversion under the provisions of the Act in my four years of collectorship in tribal areas,” said an MP cadre IAS officer. It is estimated that only 15 cases have so far been registered under the MP Act since 2006.

There is little doubt that the Act is aimed at stopping the missionary juggernaut which rolled into the Chota Nagpur plateau almost a century ago.

What is the point of the Act and the heated debate? “It is to create a hostile environment against the minorities who can be threatened, investigated and held on the simplest pretext,” said a member of the Bhopal Church, also affiliated to the RIM.

Article 25 of the constitution guarantees the right to practise any religion of choice. The Supreme Court in the case of Ratilal Panachand Gandhi v. State of Bombay clarified this provision by saying that every person has a fundamental right not merely to entertain such religious belief as may be approved of by his judgment or conscience but to exhibit his belief and ideas in such overt acts as are enjoined or sanctioned by his religion and further to propagate his religious views for edification of others.

In another landmark case of Rev Stainislaus v. State of Madhya Pradesh, the court examined whether the right to practice and propagate one’s religion also included the right to convert. The Court upheld the validity of the earliest anti-conversion statutes: the Madhya Pradesh Dharma Swatantraya Adhiniyam, 1968, and the Orissa Freedom of Religion Act, 1967. The Court found that “restrictions on efforts to convert are constitutional because such efforts impinge on ‘freedom of conscience’ and ‘public order’.”  It held that the right to propagate did not include the right to convert any person.

Thus, while each state is free to make its own acts of restraining certain religions from forcible conversion, in practise we have yet to see a just and proper use of the law which appears to defeat its very purpose.