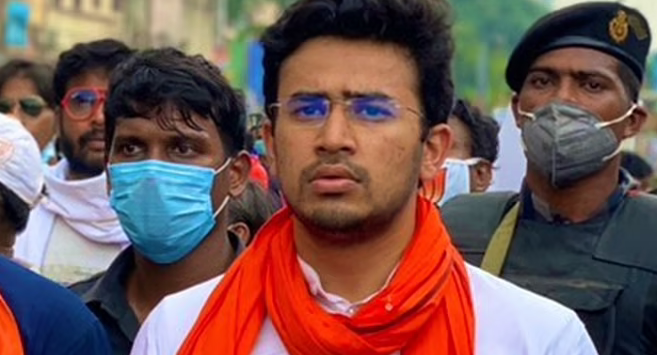 New Delhi (ILNS): The gathering initiated by the visit of BJP leader Tejasvi Surya to Bengaluru on October 23 was marked by a large gathering of people who paid little heed to Covid-19 regulations in force in the state with barely anybody wearing masks. A protest petition had been filed by Letzkit Foundation through advocate Ramesh Puthige in the Karnataka High Court. Yesterday, the court asked the administration:

“Have you collected fines from Member of Parliament (Tejasvi Surya) and other political leaders for not wearing masks? What signals are you sending?”

The court queried the government while hearing the petition by Letzkit Foundation. The petition raised allegations that the directives for COVID-19 management laid down by the Ministry of Home Affairs (MHA) were not followed or implemented in Karnataka.

The division bench of Chief Justice Abhay Shreeniwas Oka and Justice S. Vishwajith Shetty asked for details of the complaints lodged against the star campaigners who were campaigning for the R.R. Nagar by-poll.

The advocate for the petitioner submitted that not a single celebrity had been booked by the State till date for defying social distancing rules. He pointed out that ordinary citizens were being fined for infractions.

Government counsel Vikram Huilgol submitted that the rally had started from Chikkajala toll gate and had traveled till Malleswaram. Surya had not flouted social distancing norms. He also said that it has to be ascertained from where the picture of Surya was taken.

Also Read: Supreme Court places strict ban on use of disinfecting tunnels, slams govt for lack of law and clarity

The Bench also asked the State government about the number of permissions granted for conducting election rallies during the Covid epidemic.

The Court has fixed the matter on November 9 for further hearing.

Did you find apk for android? You can find new Free Android Games and apps.
Share
Facebook
Twitter
Pinterest
WhatsApp
Previous articleSupreme Court places strict ban on use of disinfecting tunnels, slams govt for lack of law and clarity
Next articleJharkhand joins four other states in withdrawing general consent to the CBI