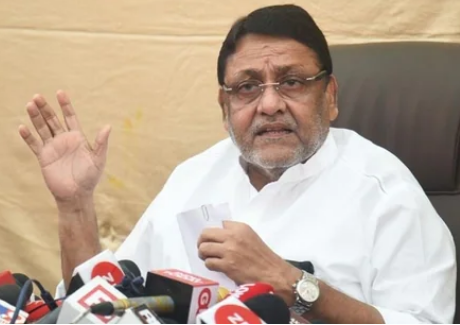 The Nagpur Bench of the Bombay High Court on Friday stayed the notice issued to Nawab Malik, a leader of the Nationalist Congress Party (NCP), by a lower court. The said notice was issued to Malik on a complaint filed by a cousin of Narcotics Control Bureau (NCB) Mumbai Zonal Director Sameer Wankhede for atrocities against SC/STs.

The division bench of Justice R. B. Deo while hearing the plea decided to stay the special court’s order in quashing an application filed by Malik under Article 482 of the Constitution. The application claimed that the complaint filed by Sameer Wankhede’s paternal cousin does not have jurisdiction to issue him with a notice and moreover the complaint is neither supported by an affidavit.

Wankhede’s cousin Sanjay Wankhede had filed a criminal application for an FIR under Section 156(3) of the Code of Criminal Procedure before the District and Addl. Sessions Judge, Washim, alleging offences under Sec. 3[1][q], [r], [u] of the Scheduled Castes and Scheduled Tribes [Prevention of Atrocities] Act, 1989.

The bench noted that, at this stage, it is not necessary to make an elaborate reference to the allegations in the application preferred by Sanjay Wankhede. Broadly, the grievance is that Sanjay Wankhede is related to Samir Wankhede. And belongs to the Scheduled Caste. Sanjay Wankhede contended that as the Zonal Director, Narcotics Control Bureau (NCB), Mumbai, Samir Wankhede took action against some famous personalities and since then Malik has levelled false accusations against Samir Wankhede in press conferences and on social media.

A criminal application for an FIR was filed by Samir Wankhede’s cousin under Section 156(3) of CrPC before the District and Addl. Sessions Judge, Washim. The application accuses him of offences under Sec. 3[1][q], [r], [u] of the Scheduled Castes and Scheduled Tribes [Prevention of Atrocities] Act, 1989. On December 4, a notice was issued to Malik on the every next day of him filing the application.

Sanjay Wankhede submitted that his family members were said to be Muslims and referred to by caste as a deliberate insult of his family members including Sameer Wankhede. He further said his family belongs to the Mahar Scheduled Caste and are not Muslims. Sanjay Wankhede added further that the allegations of Nawab Malik that we are Muslims is entirely bogus and the allegations made by him has caused us huge loss including the entire family.

The NCP leader challenged the proceedings before the Nagpur Bench of the Bombay High Court. A notice was issued to Malik on December 4, 2021 on the complaint of Sanjay Wankhede. The court has sought response from Sanjay Wankhede while posting the matter for further hearing after the Christmas vacations.

Did you find apk for android? You can find new Free Android Games and apps.
Share
Facebook
Twitter
Pinterest
WhatsApp
Previous articleJustice GT Nanavati passes away at the age of 86
Next articleMeghalaya HC asks authorities to finish work on Borghat-Sonapur link soon