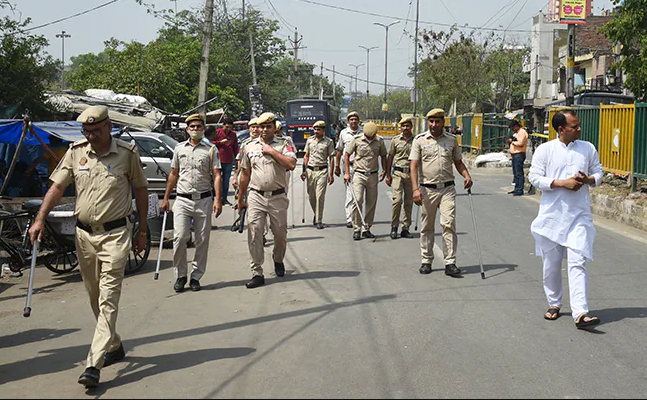 “Police officials should be leading by example by complying with the law”, noted the Delhi High Court on Wednesday while directing Delhi Police to take action against police officials who are found to be in non-adherence to the Covid-19 protocol mandated by the Delhi Disaster Management Authority (DDMA), as also for violating provisions of the Motor Vehicles Act by riding motorcycles without wearing helmets.

The Division Bench of Acting Chief Justice Vipn Sanghi and Justice Sachin Datta was dealing with an appeal directed against the single judge order disposing of a plea moved by a practising advocate seeking action against the erring Delhi Police officials who are found in violation of Covid-19 masking norms.

The Bench, while disposing of the instant appeal, observed thus:
“Police officers are equally bound by the directions issued by the DDMA as any other citizen. We are of the view that they should, in fact, be leading by example by complying with the law. We therefore direct the Delhi Police to take appropriate action for violation of the masking norms as also for violation of the provisions of the Motor Vehicles Act for riding their vehicles without helmets.”

At the outset, Advocate Shaleen Bhardwaj approached the Delhi High Court in December last year seeking action against police personnel found without mask on duty and and thereby violating the DDMA guidelines. He alleged that two police officials challaned his relative in Delhi’s Sadar Bazar for not wearing mask when they themselves were without masks. He further alleged that when he interrupted, the said officials accosted him and took him to the nearest police station wherein it was seen that most of the police officials were without masks.

He pointed out that he made a complaint in respect thereof before the DCP concerned, but no action was taken upon his complaint for violation of directions issued by the DDMA.

Justice Yashwant Verma, in March this year, disposed of his plea on the ground that the two police personnel who were embroiled in a spat with him were cautioned.

During the course of hearing today, Advocate Satyakam, representing Delhi Police, informed the Bench that an enquiry was made into the alleged incident and a detailed report has been filed thereupon wherein it was found that several police personnel were found violating the Covid-19 masking policy on duty at their workplace and riding their two-wheelers without helmet.

At this point, the Bench inquired from him if such officials have been challaned. “Have you challaned those police officers without masks? You are challaning the people. Are they (errant police officials) above the law? You have to lead by example,” the Court orally said and directed the Delhi Police to take appropriate action against such officials within a period of six weeks.