Civil Lines protest: Delhi HC says protesting a right, but why hold it in residential area? 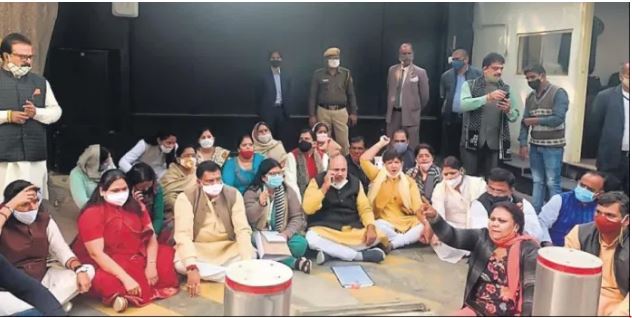 Protesting is the constitutional right of the people but it should not become a precedent to protest in a residential area, the Delhi High Court said on Thursday while hearing a plea against the Delhi Police for allowing a protest in Civil Lines, Delhi. The Court said protest means, people come and go but it does not mean to keep a sit-in or dharna.

Justice Sanjeev Sachdeva was hearing the plea filed by the Civil Lines residents’ association seeking contempt action against Delhi Police for allowing protests to be held in their area, causing problems in traffic movement.

On Thursday, the Delhi High Court asked Advocate Gautam Narayan appearing for Delhi Police to seek instructions and make arrangements as protesting is a right but it might be problematic to protest in a residential colony.

A single judge bench of Justice Sanjeev Sachdeva while hearing the plea through video conferencing said now as per the visuals there are tents coming up. If they are squatting, it is their right but it has become daily routine, it is the 11th day.

Advocate Arun Kathpalia, appearing for the petitioners, sought time for submissions, as the status report has been served upon him last night.

However, Justice Sachdeva asked Advocate Gautam Narayan to take instructions and make some other arrangements with regards to the issue, noting that protesting is not a problem. Kathpalia submitted, “We are families and our children are not able to go out.”

In addition to this, Advocate Rajesh Tyagi sought his interference from the Court as his residence is just opposite to Chief Minister’s residence and submitted “the road is clear, everything is clear, tents were only when it rained.”

Whereas Justice Sachdeva asked whether they were also staying at night, where would they be going for attending nature’s call? To this, Tyagi said, “There are arrangements, I see it when I go for morning walks.”

Justice Sachdeva stated, “Public functionaries deal with several people, if this is permitted, today it is peaceful, tomorrow it might get worse, today is 11th day.” The bench has listed the matter for further hearing on December 18.