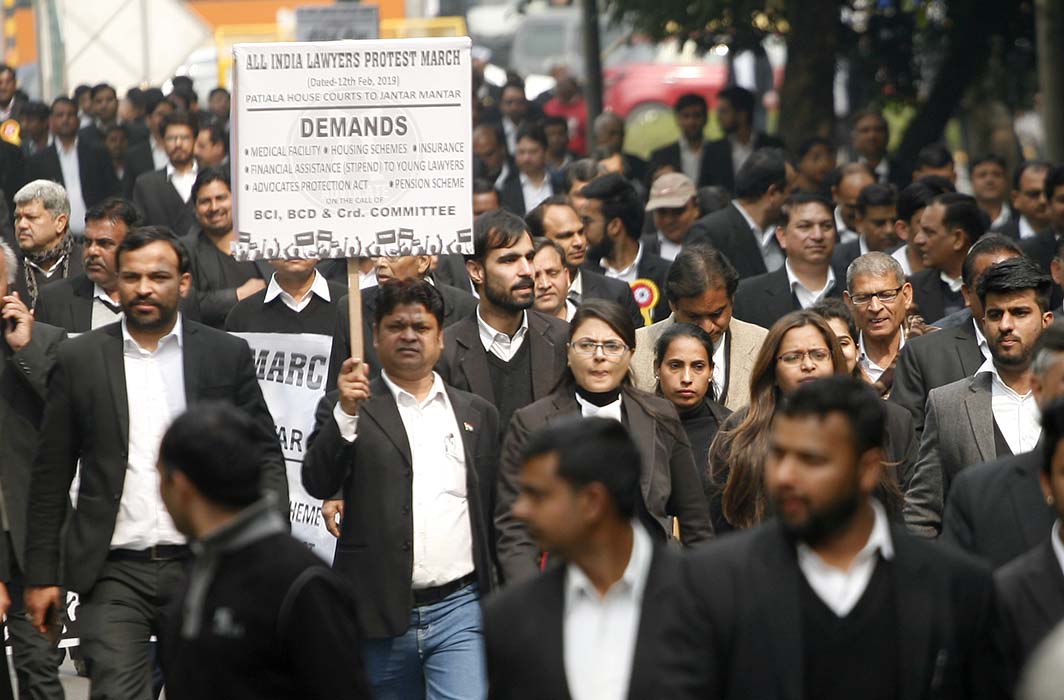 A bench headed by Chief Justice Rajender Menon and Justice Brijesh Sethi has sought response of Centre and Delhi Govt on a Plea filed by Advocates Tajinder Singh, Anurag Chauhan & Yakub Raza Seeking directions to Central Government & State Government to take steps for protection of advocates while discharging their duties in administration of justice and welfare measures such as medical, pension and housing schemes.
The petition said that protective measures should be enacted to protect this noble profession as members of the legal fraternity are continually encountering reports in media as well as by word of mouth of such attacks.
The petition mentioned about the recent nation-wide demonstration held by Bar Council of India on 12/02/2019, in which a large number of advocates assembled together at various state headquarters and demanded various welfare schemes for the welfare of the legal fraternity. It also talked about the necessity to pass an ordinance under Article 213 of the Indian Constitution of India regarding the provision of statutory protection to the advocates from criminal attacks on the advocates and malicious prosecutions against advocates, and to take appropriate measures like facilities of medical insurance.
The petition discussed in detail the importance of legal profession and the contribution of lawyers in upholding the justice system of the country. The aim of the petition is the welfare and protection of legal fraternity of advocates. The legal profession was integrated at the national level by the provisions of the Advocates Act, 1962 passed by the Parliament by reference to entry 26 of List III (Concurrent List) to seventh Schedule of the Constitution in 1962.
The petitioners submit that the judiciary and all its arms are the only protection enjoyed by the citizenry of this country against any unlawful deeds, miscarriages of justice and ill-informed attacks. The plea submitted that there is need of the hour for an act i.e. “Advocates Protection Act” to ensure their safety.
The petitioners further submit that section of the police, at the behest of local politicians, causes more trouble by implicating them in false cases and arresting them. Thus, it is even more important to enact laws for the protection of advocates.
The petitioners also mentioned about some states where there are laws related to the protection and betterment of lawyers. States such as Uttar Pradesh, Bihar, Karnataka, Andhra Pradesh, Tamil Nadu, Kerala etc, have Advocate Welfare Fund Act wherein they provide claims in the event of death, retirement, medical expenses and financial hardships. The Kerala government provides Rs. 5000/- and the UP government provides Rs. 2000/- as monthly stipend to lawyers who are below 30 years of age with less than 3 yrs of practice at the bar and annual income less than Rs. 1 lakh. The UP government also provides Life insurance cover of Rs 5 Lakh as compensation for the death of advocate. Govt. of Madhya Pradesh and Jharkhand has already introduced Advocates Protection Act in their respective states.
The petitioners submit that it is need of the hour for both the centre as well as for state government to come up with necessary law to provide protection to advocates while discharging their duty in the practice of law. It is the responsibility of the Government to protect the interest of advocates as it does of judicial officers.
The petitioners prayed that a committee should be set up immediately to examine and give recommendations for the protection of advocates while discharging their duties in administration of justice and welfare measures. They also asked for the immediate appointment of Amicus Curiae so that the data pertaining to such assaults may be expeditiously submitted to this court. They asked for enactment of necessary law on protection of advocates on the basis of findings and recommendations of the panel/ committee and the report of the Amicus Curiae along with implementation of advocates’ fundamental rights of social security and welfare measures.
The High Court will hear the matter next on 07 August, 2019.

#DelhiHC has issued notice to Union of India and Delhi Govt. on a PIL for enacting Advocate Protection Act and for implementing social and welfare measures for advocates i.e. pension, Mediclaim, insurance, stipends to young advocates etc.