Above: The Gujarat High Court had virtually conducted a mini-trial during a bail hearing in a POCSO matter

The apex court pulled up the Gujarat High Court for ordering lie detector, brain-mapping and narcoanalysis tests on an accused for deciding his bail application

The Supreme Court recently pulled up the Gujarat High Court for acting like “a trial court” in deciding a bail application and for disclosing the victim’s identity. The case related to sexual assault on a minor under the Protection of Children from Sexual Offences (POCSO) Act. The High Court had ordered lie detector, brain-mapping and narcoanalysis tests on the accused person for deciding the bail application. And it also ordered that the same tests be conducted on the victim’s family members.

The family appealed in the Supreme Court against this order. The apex court bench of Justices NV Ramana and Mohan S Shantanagoudar said it was “surprising” to note the approach adopted by the Gujarat High Court. It said: “The court must not undertake meticulous examination of evidence collected by the police, or rather order specific tests, as done in the present case. By ordering the tests and venturing into the reports [of these tests] with meticulous details, the High Court has converted the adjudication of a bail matter to that of a mini-trial. This assumption of the function of a trial court by the High Court is deprecated.” It said the HC order stood in “clear violation” of the precedents set by it and “statutory prescriptions” by disclosing the victim’s name in the order. It also indicted the state for its “lethargic attitude” in not bringing the matter to its notice by filing an appeal.

Why this case has been slammed is that certain predefined parameters are to be considered by the court before granting bail to any person. These include whether the accused is going to flee, whether he will tamper with the evidence, etc. Instead of asking these questions, the Gujarat High Court ordered various tests, leading to the Supreme Court’s reaction.

The case related to an FIR filed on September 16, 2017, in Shahpur police station of Ahmedabad by a grandmother who alleged that sexual assault was committed on her seven-year-old granddaughter by the head teacher of a municipal school. The offence was registered under Sections 376(2)(f) and 376(2)(1) of the IPC and various sections of POCSO. The matter came up before the High Court when the alleged accused, Sunil Kumar, moved an application under Section 439 of the CrPC for bail.

After the serological and Forensic Science Laboratory (FSL) report and medical certificate indicated no wrong doing, Justice Pardiwala said: “If I accept the allegations as they are, then prima facie, it could definitely be said that the applicant-accused is involved in the offence. Having regard to the nature of the allegations and the serious doubt created in my mind, I thought fit to look into the matter closely although the prayer is for bail… In such circumstances referred to above I thought fit to pass the following order, dated March 23, 2018.”

The order said: “The applicant accused before me is a teacher. The victim is a seven-year-old girl studying in the school in which the applicant is a teacher. The investigation is over. Chargesheet has been filed. Having regard to the peculiar facts and circumstances of the case, I have suggested to the Investigating Officer to subject the applicant-accused to few scientific tests like lie detection, brain-mapping, narco-analysis, etc. The Counsel for the applicant has agreed to give his consent for undergoing such scientific tests. The Forensic Science Laboratory may be directed accordingly and the matter be posted for hearing on April 10, 2018, after obtaining the results of the tests.” 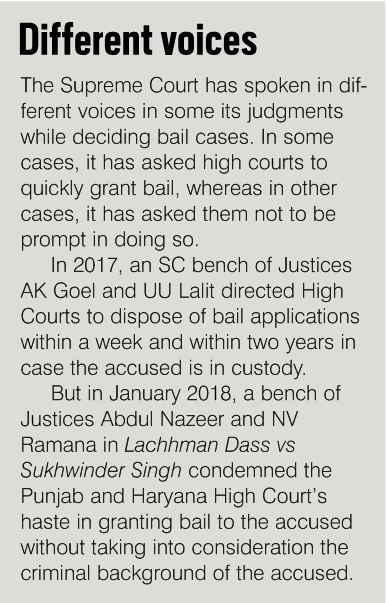 The narcoanalysis concluded that the accused had not committed the crime on the victim or any other girl of the school. The report of the brain- mapping test also gave a clean chit to the accused. The Court further noted: “It is only with the aid of the results of the three scientific tests that I am in a position to reach to an appropriate conclusion whether I should exercise my discretion in favour of the applicant-accused or not. If I would have gone only by the victim and their family members and rejected the bail application, then probably, I would have done injustice with the applicant.” The order said that while it is the duty of the Court to protect a genuine victim, it is equally its duty to ensure that an accused is punished only for an act he has actually committed.

The order further noted that the version of the victim was that on the previous day of the incident, the accused had played the same mischief in the classroom with other girls, too. However, this was not substantiated by the statement of those girls. The statement of the lady constable at the time of the recording of the victim’s statement also indicated that the grandmother kept giving hints to the victim and even pinched her. This led the lawyer of the accused to say it was out of vengeance towards the applicant on account of some dispute over admission and school-leaving certificate that the family members of the victim had done this.

The order further said: “I am of the view that the first informant, her son and mother of the victim should be subjected to the same three tests to make the picture more clear. The investigating officer may do it as a part of the further investigation by informing the trial court in this regard. If any of the three offer any resistance in this regard then the same by itself will be an indication of their guilty conscience.”

The order clarified that “it goes without saying that any observations touching the merits of the case are purely for the purpose of deciding the question of grant of bail and shall not be construed as an expression of the final opinion in the main matter… the three tests by itself does not put an end to the trial. It will be open for the prosecution to lead appropriate evidence both, oral as well as documentary, for the purpose of establishing its case beyond reasonable doubt. The report of the Forensic Science Laboratory shall be considered by the trial court in accordance with the law along with other evidence that may be led in the course of the trial. At the trial, the trial court shall not be influenced by the observations of preliminary nature qua the evidence at this stage made by the court while enlarging the applicant on bail”.

Over-enthusiasm, too, has its perils.