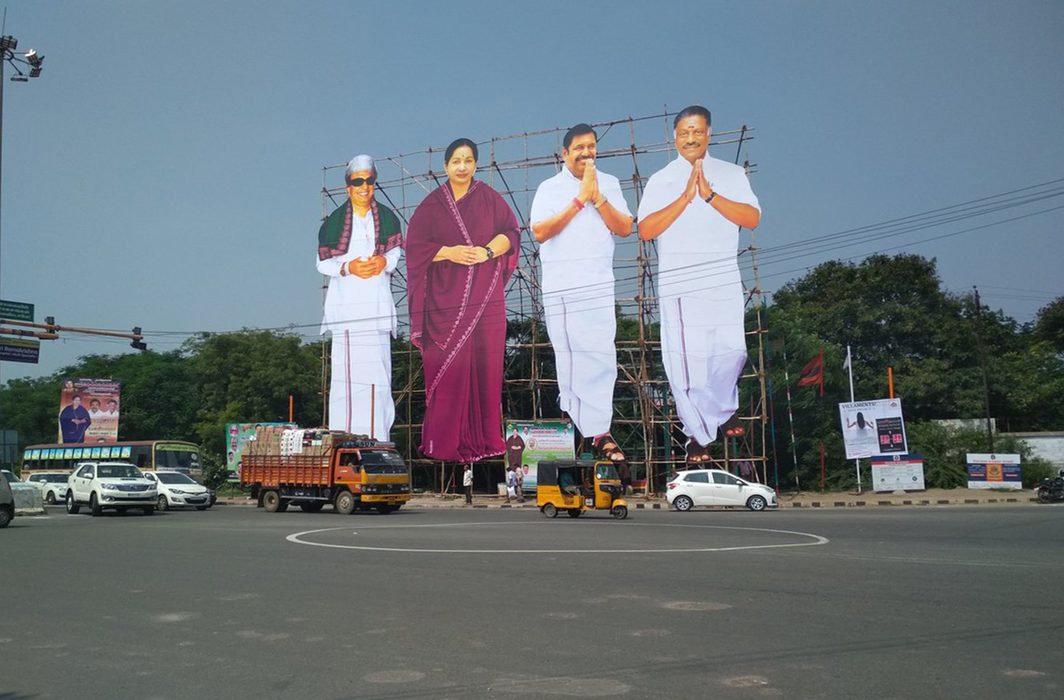 Above: Cut-outs of political leaders/twitter.com

The death of a young techie has prompted a vacation bench of the Madras High Court to recommend a ban on pictures of living persons on posters. But it is easier said than done

In September 12, Subhasri, a 23-year-old techie, was killed after an illegal banner erected by a former municipal councillor of the ruling All India Anna Dravida Munnetra Kazhagam (AIADMK) fell on her while she was riding her bike through a busy road in south Chennai. The banner was to welcome Deputy Chief Minister O Panneerselvam who was arriving in the vicinity to attend the wedding of the ex-councillor’s son.

On October 10, a vacation bench of the Madras High Court recommended to a division bench hearing petitions to ban illegal banners/hoardings to reconsider the issue of imposing prohibition on printing pictures of “living persons” on them. The vacation bench, headed by Justice S Vaidyanathan and comprising Justice C Saravanan, urged the division bench of Justices M Sathyanarayanan and N Seshasayee which is hearing all the cases related to banners/hoardings to take note of its suggestion.

The vacation bench was hearing a petition from R Ravi, the father of Subhasri. He had prayed for maximum punishment to those who were indulging in erecting illegal hoardings/banners and pleaded for a compensation of Rs 1 crore for the death of his daughter. He also prayed for constituting a Special Investigation Team to inquire into the complete details of erection of illegal banners/hoardings in Tamil Nadu.

Experts say that the recommendation of the Justice Vaidyanathan bench is unlikely to get past the bench headed by Justice Sathyanarayanan in the light of legal developments in the past.

In October 2017, while dealing with a bunch of petitions related to the erection of banners/hoardings (both legal and illegal) in the state, Justice Vaidyanathan of the Madras High Court had imposed a blanket ban on printing of photos of living persons on banners/ hoardings with immediate effect. A few days later, the Tamil Nadu government appealed to a division bench to remove the ban on photographs of Tamil Nadu Chief Minister Edappadi Palanisami on hundreds of banners/hoardings. But the bench refused to interfere in Justice Vaidyanathan’s order and dismissed the government’s plea.

The state government then approached the High Court again, this time through the Chennai Corporation. In December 2017, a division bench comprising then Chief Justice Indira Banerjee and Justice R Hemalatha quashed Justice Vaidyanathan’s order. The bench clearly stated that there was no statute or rule that prohibited inclusion of pictures on banners/hoardings.

The Tamil Nadu government may be arguing from a position of strength as, during the hearing before the Court, the advocate general of the state, Vijay Narayan, said that outdoor advertisements containing endorsements made by cinema stars and celebrities belonging to several walks of life, etc., were common and if the ban was imposed, it would spell doom for the advertising industry. He contended that the consequences would be disastrous not only for the advertising industry but also for other allied fields like carpenting, painting, the paper industry, and so on.

Narayan also cautioned the Court that before taking any decision in the matter it should take into account the sizeable revenue received by local bodies in the state by way of licence fees for erecting banners/hoardings and consider the employment generated for thousands of people who are directly or indirectly earning their livelihood from this occupation.

The chief justice-led bench accepted the government’s argument and said the single judge had erred in law by directing the chief secretary of the state to issue a circular to all local bodies asking them not to grant permission for banners, flex boards, signboards and hoardings featuring portraits or photographs of people who are alive.

The bench also said that since there was no challenge to any act, rules or regulations which regulate the erection of banners, hoardings, flex boards and so on featuring portraits or photographs of living persons, the single judge’s order in this regard was not legally maintainable and quashed it.

A section of lawyers and even jurists are surprised by Justice Vaidyanathan’s recommendation to the Justice Sathyanarayanan bench to reconsider the lifting of the ban. The lawyers find it incongruous that Justice Vaidyanathan made such a recommendation when his own order was already quashed by a division bench earlier. “I am perplexed. The division bench of the High Court was clear that there was no provision in the law regulating the erection of banners/hoardings that mentions about banning such pictures/portraits,” said R Pandiyan, a practising advocate in the Madras High Court.

The business of erecting banners/ flex boards/hoardings has been a lucrative one in Tamil Nadu for the past 30 years. In fact, there was a powerful lobby called the Tamil Nadu Outdoor Advertisers Association working in this field for several years. Its job is to erect commercial hoardings/banners/flex boards both in public and private places. The clientele includes not only private companies but also public sector undertakings like Air India, ONGC, IOC, etc.

Trouble started in 1991 when the late AIADMK general secretary J Jayalalithaa captured power in the state. Huge cut outs, hoardings and banners carrying her pictures became the order of the day. The public display of sycophancy by AIADMK party cadres bordering on the extreme resulted in the flooding of giant cut-outs—some as tall as 120 feet—throughout the state, especially in capital Chennai.

After Jayalalithaa was thrown out of power in 1996, a change of mood set in and the erection of political banners and cut-outs saw a dip but commercial banners and hoardings started increasing. After much litigation, the Tamil Nadu government decided to allow only political banners/hoardings for a stipulated period and imposed a blanket ban on commercial advertising through banners/hoardings.

People in the know of things say what Tamil Nadu now needs is not a total ban on banners/hoardings but regulation. It is argued that vast amounts of money accrue to the government, especially to local bodies, from the business. There are over 20,000 people employed directly and indirectly in the business and the government can allow banners/hoardings by charging licence fees and ensuring a safe environment.

“The size, stability and the correct place for erection of banners/hoardings must be ensured and the state government can establish a nodal agency for this separately or create one in all the local bodies in the state,” said CS Kotteeswaran, a Chennai-based journalist.

Coming to the question of statutory provision for printing photographs of living persons on banners and hoardings, there is no law that bans it. Besides, as the state advocate general told the High Court in 2017: “The advertising industry could not be expected to wait for a model to die or go in search of dead models in view of the court-imposed ban.”