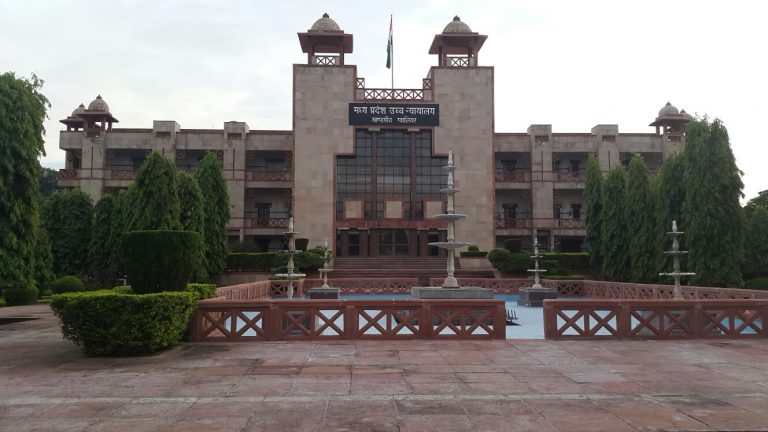 Above: The division bench of the MP High Court cited three past verdicts to justify its decision/Photo: barandbench.com

To become a judge, good character means an unblemished criminal record. The Madhya Pradesh High Court succinctly sent out this message by dismissing the petitions of two advocates who had challenged denial of their appointment as district judges after being selected for the posts in the entry level recruitment in 2017.

The petitioners—Deep Narayan Tiwari and Nand Kishore Sahu—had argued that they had truthfully mentioned the criminal cases pending against them while applying for the district judge’s posts. They also said that they had already been acquitted of the charges they faced before the selection.

However, a division bench comprising Chief Justice SK Seth and Justice VK Shukla observed that mere acquittal in a criminal case would not be sufficient to infer that a candidate possessed good character.

In its order, the bench refused to interfere with the decision of the High Court Scrutiny Committee that had rejected the petitioners for judgeship because they had faced prosecution in two criminal cases.

The petitioners had filed separate petitions which the High Court clubbed together in view of the similar nature of their grievances. Tiwari and Sahu were selected as district judges by the High Court for MP Higher Judicial Service (Entry Level) Direct Recruitment in the Bar Examination of 2017. Their names were included in the final list of selected candidates. However, in their joint meeting, the Administrative Committee (Higher Judicial Services) and Examination-cum-Selection and Appointment Committee rejected the two lawyers’ selection without disclosing to them the reason for doing so.

The petitioners took recourse to the Right to Information (RTI) Act to obtain the minutes of the joint committee meeting held on July 18, 2018. The RTI information revealed that in respect of Tiwari, the Committee noted: “After due consideration (it is) resolved that though a case against Shri Deep Narayan Tiwari under sections 354/34, 186, 294 and 506-BB read with Section 34 of IPC resulted in acquittal, the case section 305/34 Indian Penal Code and 3(2)(v) of the Scheduled Castes and Scheduled Tribes (Prevention of Atrocities) Act, 1989, is still pending before Special Judge (SC/ST), Shahdol. The candidature of the candidate is not recommended for appointment in view of reasons recorded.” Sahu’s appointment was also cancelled on the same ground.

Challenging this ground for cancellation of their appointment, the petitioners submitted that the criminal cases against them had been quashed. KC Ghildiyal, the advocate for the petitioners, submitted that after the decision by the Committee, charges in the pending criminal case had been quashed by the High Court in the Deep Narayan Tiwari vs State of MP criminal appeal. The High Court had said in this case that “he has been discharged from the offence under Sections 506 and 385 of the Penal Code, 1860 and under Sections 3(1)(r) read with 3(2)(v)(a) of Atrocities Act, 1989”. The petitioners also contended that they had truthfully disclosed pendency of criminal cases against them while applying for the district judge’s posts.

However, the selection committee’s counsel submitted that the petitioners had no right to be appointed merely because they had honestly disclosed the criminal cases against them. It was also pointed out on behalf of the Committee that Tiwari was acquitted on August 8, 2018, whereas the panel had disqualified him in a meeting held on July 18, 2018. Therefore, on the date of appointment of the petitioner, the criminal cases were still pending against him.

After hearing both sides, the divisional bench cited three past judgments to conclude that “mere selection would not confer any right as appointment is always subject to character verification of a selected candidate”. The judges referred to the full bench judgment in Ashutosh Pawar vs High Court of MP which was passed in January last year. It pertained to the question of whether acquittal in criminal cases is proof of good conduct.

In conjunction with this, the bench also cited the 2018 case of State of MP vs Abhijit Singh Pawar in which the Supreme Court held that “an employer can certainly take into account the job profile for which the selection is undertaken, the severity of the charges levelled against the candidate and whether the acquittal in question was an honourable acquittal or was merely on the ground of benefit of doubt or as a result of composition”. The bench also referred to the Supreme Court judgment in the case of Union territory Chandi­garh administration and others vs Pradeep Kumar to buttress its ruling.

The petitions were then dismissed, with the Court observing: “We do not find any merit in the writ petitions. Admittedly, on the date of consideration of the cases of the petitioners for appointment, there were criminal cases pending against them and mere selection would not confer any right as appointment is always subject to character verification of a selected candidate.”

Interestingly, two more judges were disqualified by the MP High Court in October 2017 for violating the two-child norm, only to be reinstated six months later.

In March 2018, the High Court reinstated two additional district judges (ADJs) with the direction to grant them all consequential benefits except salary from the date of termination till the date of reinstatement. Advocates Ashraf Ali and Manoj Kumar had appeared in the Direct Recruitment Examination and were appointed ADJs at Jabalpur and Gwalior, respectively, in April 2017.  When it was disclosed that Kumar had five children and Ali three, the High Court Selection Committee terminated their service in September 2017. The two ADJs moved the High Court, arguing that the termination orders had been passed without hearing them. The High Court took note of this and ordered their reinstatement.

However, in the present case, there seems no such succour.