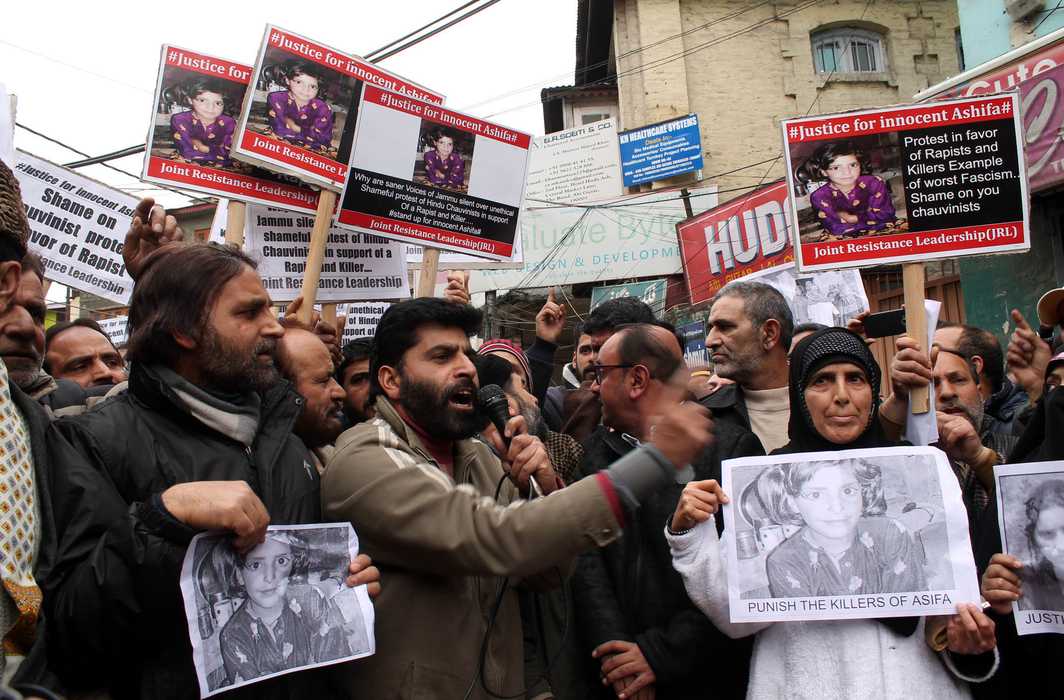 Above: A protest march in Srinagar against the Kathua rape and murder case/Photo: UNI

An Urdu couplet by Ghalib, translated into English, says: “Near the nest was the hidden cruel net (of a hunter). Even before the chick could take its first flight, it was caught.” The couplet was made famous by former Supreme Court judge Markandey Katju who used it in his verdict in the Budhadev Karmaskar vs State of West Bengal case to highlight the plight of girls who ought to lead “a life of happiness but instead they get caught in the flesh trade because of their poverty at a very early age and their lives are ruined”.

The couplet found its echo in Pathankot (Punjab) District and Sessions judge Tejwinder Singh’s widely hailed ruling on June 10 this year on the gang rape and murder of an eight-year-old girl of Kathua in the adjoining Jammu region. The incident had rocked the country and moved the world, with even United Nations Secretary-General Antonio Guterres describing it as “horrific” and urging the authorities to bring the perpetrators of the crime to justice.

Ghalib’s verse remains relevant. A legal battle continues in the Punjab and Haryana High Court to get justice for the innocent victim even as there is yet another twist in the gory tale. A “judicial magistrate first class/city judge” has now issued directions for the registration of an FIR against six members of the Special Investigation Team (SIT) of the crime branch of the Jammu and Kashmir police who had carried out the probe into the crime; he has sought compliance by November 7.

The SIT consisted of Senior Superintendent of Police Ramesh Kumar Jalla (who has since retired); Additional Superintendent of Police, Crime Branch Naveed Peerzada; Deputy Superintendents of Police Shwetambri Sharma and Nissar Hussain and sub-inspectors Urfan Wani and Kella Kilgore. The Court directive on October 22 came on an application filed by three witnesses, Sachi Sharma, Neared Sharma and Savil Sharma who alleged that they were “forced/tortured/coerced” to depose and create “false evidence” against Vishal Jangotra, an accused in the case who was the only one of the seven accused let off by Tejwinder Singh but whose conviction is being sought by the victim’s family and the J&K government in the High Court.

Judicial Magistrate Prem Safar passed directions to the Senior Superintendent of Police, Jammu, on an application filed under Section 156(3) of the Corp which states that any magistrate empowered under Section 190 may order an investigation into any cognisable case in the area under its jurisdiction. Section 190 titled “Cognizance of offences by magistrates” elaborates: “(1) Subject to the provisions of this Chapter, any Magistrate of the first class, and any Magistrate of the second class specially empowered in this behalf under sub-section (2), may take cognizance of any offence—(a) upon receiving a complaint of facts which constitute such offence; (b) upon a police report of such facts; (c) upon information received from any person other than a police officer, or upon his own knowledge, that such offence has been committed. (2) The Chief Judicial Magistrate may empower any Magistrate of the second class to take cognizance under sub-section (1) of such offences as are within his competence to inquire into or try.”

The applicants stated that during the investigation, they were produced by the SIT before a magistrate to record a statement under Section 164A CrPC (empowering a judicial magistrate or a metropolitan magistrate, whether or not having jurisdiction in the matter, to record the confession or statement made to him in the course of the investigation) in which they mentioned the “atrocities and torture” inflicted on them to present fake proof against Jangotra who was “falsely implicated”. They referred to the subsequent acquittal and exoneration of Jangotra “from all charges” by the trial court in Pathankot (Punjab) as confirmation that they were “deliberately tortured” and “compelled” to make bogus depositions by the SIT “depicting mala fide” on its part and “a very well-hatched conspiracy”.

The application, according to them, was necessitated because of inaction on the part of both the Station House Officer of Pacca Danga police station in Jammu where they had filed a complaint on September 24 seeking registration of an FIR against members of the SIT under Section 194 (giving or fabricating false evidence with intent to procure conviction of capital offence) of the Ranbir Penal Code (RPC) as well as the senior superintendent of police, Jammu, whom they had approached through registered post on October 5. The city judge issued a direction for registering an FIR, taking the view that “cognizable offences are made out” “from the gist of the complaint”.

Inquiries reveal that the Jammu district police obtained the versions of the SIT members. Senior officials are confident that they will overcome the latest twist as they had done in the past. There is a possibility that the High Court may be moved for quashing the lower court’s order.

Talking to reporters in Srinagar, Director-General of Jammu Kashmir Police Dilbagh Singh was reported to have defended the SIT and said no witnesses were tortured.

Malerkotla (Punjab)-based advocate Mubeen Farooqui, who has been assisting the victim’s family, recalls that the issues raised before the city judge had come up before the trial court which had not issued any directions. “My advice will be to go to appeal. All judicial options should be exercised to ensure the smooth functioning of the SIT,” he told India Legal.

The SIT was constituted after the local police was found wanting in discharging its duty. It took some time for the gruesome crime to come to light. The SIT had faced serious resistance when it was prevented from filing a charge sheet in the open court on April 9, 2018, and it had to do so at the magistrate’s house late in the evening.

A section of the local population, including some members of the lawyers’ community and an organisation named the Hindu Ekta Manch, created an uproar, alleging that the accused were being wrongly framed; they demanded a probe by the CBI. The BJP, which was initially exposed to the charge of lending support to the protesters, indulged in a damage-control exercise when faced with all-round disapproval. Two of its cabinet ministers, Lal Singh and Chander Prakash Ganga, who came out in support of the demand for the CBI probe were made to resign from the then BJP-PDP coalition government headed by Mehbooba Mufti. There was total chaos in the first quarter of 2018 till the Supreme Court effectively intervened on April 13, 2018, to transfer the case to Punjab for the sake of a fair trial.

Three others—Sub-Inspector Anand Dutta, Head Constable Tilak Raj and Special Police Officer Surender Verma —who were convicted for destruction of evidence under Section 201 of the RPC, were handed sentences of five years’ rigorous imprisonment plus a fine of Rs 50,000 each.

Jangotra was, interestingly, the only one to have been set free. The victim’s family and the state government have challenged his release in the Punjab and Haryana High Court besides seeking the death penalty for the three main convicts and enhanced punishment for three others. Their argument is largely identical—that the trial court “erred gravely” in accepting Jangotra’s plea that he was outside J&K when the crime occurred and it had ignored the testimony of Parvesh Kumar and three witnesses regarding his presence at the scene of crime. Those three witnesses have now raised a question about the integrity of the SIT before the city judge, Jammu, through their counsel, Ankur Sharma.

All other issues are pending before the Punjab and Haryana High Court. One should resist the temptation of applying an Urdu couplet to such an anomalous situation.

Former Chief Justice of India TS Thakur, who incidentally belongs to J&K and is himself a lover of poetry, aptly remarked once that couplets are exposed to varying interpretations and “you have to be absolutely sure in what you want to say and how you want to connect it with the proposition that is being directed”.