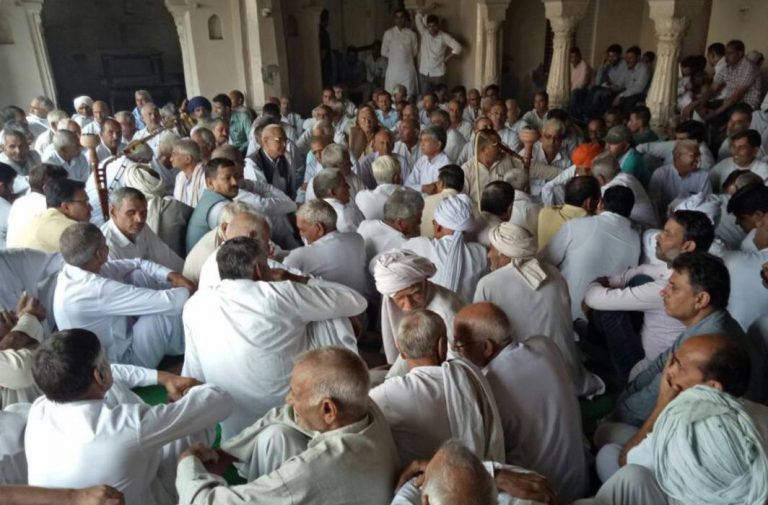 Above: The Supreme Court has slammed khap panchayats for objecting to inter-caste marriages

In a landmark order, the Supreme Court has said that any adult person can marry anyone of their choice and an attack on them for inter-caste marriage by these panchayats is illegal

Legislation has often been a catalyst for social reform. In cases where legislation is absent, judicial intervention has often led to social change. As the pressures of vote-bank politics make the political class wary of initiating legislation to bring about social reform, it looks up to the judiciary to fill the void. The recent observations of the Supreme Court against honour crimes by khap panchayats which target couples who marry within the same gotra or outside their castes are one instance of how judicial diktats could propel social reform.

In honour killings and crimes, there is a belief that the victim has brought dishonour upon the family or community, and they are especially directed against women. Men also become targets of attack by the family of the woman.

The Law Commission’s 242nd report, submitted in August 2012, attributed the phenomenon to the changing cultural and economic status of women and their going against a male-dominated culture. The report noted that it was universal. It said that caste councils or panchayats try to enforce their diktats by assuming the role of social or community guardians. It also noted that a number of such cases go unreported for fear of reprisals. The Commission underlined that Sagotra marriages are not prohibited by law, whatever the view in olden times. Inter-caste and inter-religious marriages are to be encouraged, rather than looked at with suspicion and hostility.

A seven-year-old PIL filed in the Supreme Court by Shakti Vahini, an NGO, seeking directions to the centre and state governments to prevent and punish honour crimes and any gathering of khap panchayats, provoked Chief Justice Dipak Misra to make sharp observations on January 16. He told the counsel, on behalf of the bench which comprised Justices AM Khanwilkar and DY Chandrachud: “Any adult woman or man can marry anyone of their choice. No khap or society can question it. We are concerned with the freedom of an adult girl or boy to pick their spouse. Even if a legislation is not passed, the court will step in. Therefore, any attack against an adult opting for an inter-caste marriage by the khap panchayats is absolutely illegal.”

The Court was considering upgraded suggestions submitted by the amici curiae in the case, senior counsel Raju Ramachandran and advocate Gaurav Agrawal, on measures to prevent harassment and honour crimes against young couples opting for inter-caste and intra-clan (gotra) marriages. The case will be heard again by the Supreme Court on February 5.

In fact, in 2010, the UPA government had mooted legislation to prevent, investigate, and punish honour crimes. The UPA’s exit from power led to further delays. The UPA had sought the view of states on the draft bill to control honour crimes, recommended by the Law Commission in August 2012. Although many states had agreed to the draft, the centre could not make any progress in enacting it.

The NDA government which followed urged the Supreme Court to put in place a mechanism to monitor crimes against women by khap panchayats. But the centre took its own time to respond to the initial suggestions made by the amici curiae. Neither did it reveal its stand on enacting the Law Commission’s draft bill.

Apart from the centre, the states of Haryana, Punjab, Uttar Pradesh, Rajasthan, Jharkhand, Bihar, Himachal Pradesh, Madhya Pradesh and Delhi are respondents in the present case, which indicates the spread of khap panchayats in the Hindi heartland.

The amici curiae have suggested that state governments be directed to identify districts, sub-divisions and/or villages which have had instances of honour killing or assembly of khap panchayats in the past year.  Secondly, the officer-in-charge of the police stations of these areas should be issued directives by the Superintendent of Police of the district at regular intervals to be extra cautious if any instance of inter-caste or inter-religious marriage comes to his notice, they have suggested.

The amici curiae also suggested a slew of preventive and remedial steps to be taken by the police. These include reasoning with khap panchayats not to hold a proposed meeting and warning them that this could invite registration of FIRs and invoking of Section 144 of the CrPC to ban such an assembly.

In cases where it appears to the police officer that the assembly would result in the commission of a cognisable offence in the form of physical harm to the couple or their families, he would have the power to arrest under Section 151 of the CrPC.

Among the remedial steps, it has been suggested that the local police station must carry out quick and effective investigation of instances of khap panchayats passing any diktat to take action against a couple or their families so that the action of convening an unlawful assembly and passing illegal dictates does not go unpunished. “It would be the duty of the station house officer, superintendent of police, and the district magistrate of the district to ensure the safety of the couple of such a marriage by taking such steps as may be required, including, but not limited to, providing a safe house, police protection etc. If the SHO, SP or magistrate is approached by any such couple, they would be responsible to ensure safety of the couple. It would be open to them to take the help of such NGO, as notified by the State Government for this purpose,” the amici curiae submitted.

The investigating officer of the case would be duty-bound to chargesheet members of the khap panchayat for conspiracy or abetment, as the case may be, they added.

If the SHO/SP fails to take action against khap members, the Range Inspector General of Police should be nominated by the state government to be the nodal officer who will ensure that departmental action is taken against them, they suggested.

The amici curiae have prayed for a direction to the centre on the desirability of implementing the Law Commission report within a specified time-frame. The draft bill, proposed by the Commission, seeks to punish those participating in khap meetings with imprisonment for a term not less than one year, but which may extend to two years with a fine of up to Rs 20,000. Those found guilty of criminal intimidation of the couple, their relatives or supporters face imprisonment under the draft bill for a term of not less than one year, but which may extend to three years with a fine up to Rs 30,000. If the evidence points to a threat to cause death or grievous hurt or to cause destruction of property by fire or to impute unchastity to a woman, then the maximum punishment proposed extends to seven years’ imprisonment and a fine extending to Rs 30,000.

It is now up to the Supreme Court to end the pernicious practice of honour crimes.