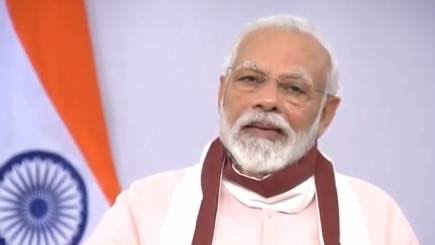 The Prime Minister Narendra Modi on Tuesday announced a Rs 20 Lakh crore economic package aimed at reviving the economy which has been shattered by the Coronavirus pandemic that has gripped the world.

The amount, which is the equivalaent of 10% of India’s GDP will lay emphasis on land, labour, liquidity and laws, PM Modi said in his fourth TV address to the nation since the start of the lockdown nearly 50 days ago. He said that starting tomorrow, Wednesday, the finance minister will announce details of the special economic package. He said that these will boost the Make in India initiative. He also took a leaf out of Mahatma Gandhi’s book and requested India to buy local products. “Be Vocal Buy Local,” he said in Hindi.

Admitting that the coronavirus will be an integral part of our lives for the while, PM also stressed on lockdown 4.0. “On taking advice from the states, we will give you a full low down before May 18,” he said.

While stressing on the importance of fighting the virus, PM Modi spoke of the idea of a self-independent India. “When India speaks of self-reliance, it does not advocate for a self-centered system. In India’s self-reliance there is a concern for the whole world’s happiness, cooperation and peace,” he added.

Talking about how one virus has affected the lives of the people, PM Modi said, “It’s been four months since we began dealing with the coronavirus. Over 2 lakh people have lost their lives due to the disease across the world. India, too, has suffered because of the virus. We have never seen nor have we heard of such a thing in our existence.”

However, he said we should not give up, saying the fight is not over. “We have to maintain our resolve against this coronavirus,” he said, adding that India was making over 2 lakh PPE kits and masks every day. “When the crisis started then not even a single PPE kit was manufactured in India, only a few N95 masks were available. Today 2 Lakh PPE kits and 2 Lakh N95 masks are manufactured in India daily,” he said.

Modi spoke of the five pillars: the first one was the economy that rose like a ‘quantum jump’, the second was the infrastructure, the third our tech-driven nation; the fourth was the ‘vibrant’ demography; and the fifth ‘is demand. PM Modi, while speaking on India’s strong demand, India’s supply chain needs to be equally strong. “For this, all stakeholders need to be together,” he said.

In a world that is fighting life & death, India’s medicines today bring a new hope. With these steps, when India is being praised everywhere in the world, every Indian feels proud, PM Modi added.

Modi’s speech comes a day after he had an interaction with all the chief ministers across the nation on the road ahead for India to battle this pandemic.

The Supreme Court in an order on Wednesday observed that the provisions of the Employees’ Provident Fund Act are applicable to private security agencies providing personnel to clients.
Read more
Courts

Tanha was arrested on May 19 for allegedly being part of the premeditated conspiracy in the north-east Delhi Riots earlier this year. --
Read more
India Legal
Did you find apk for android? You can find new Free Android Games and apps.