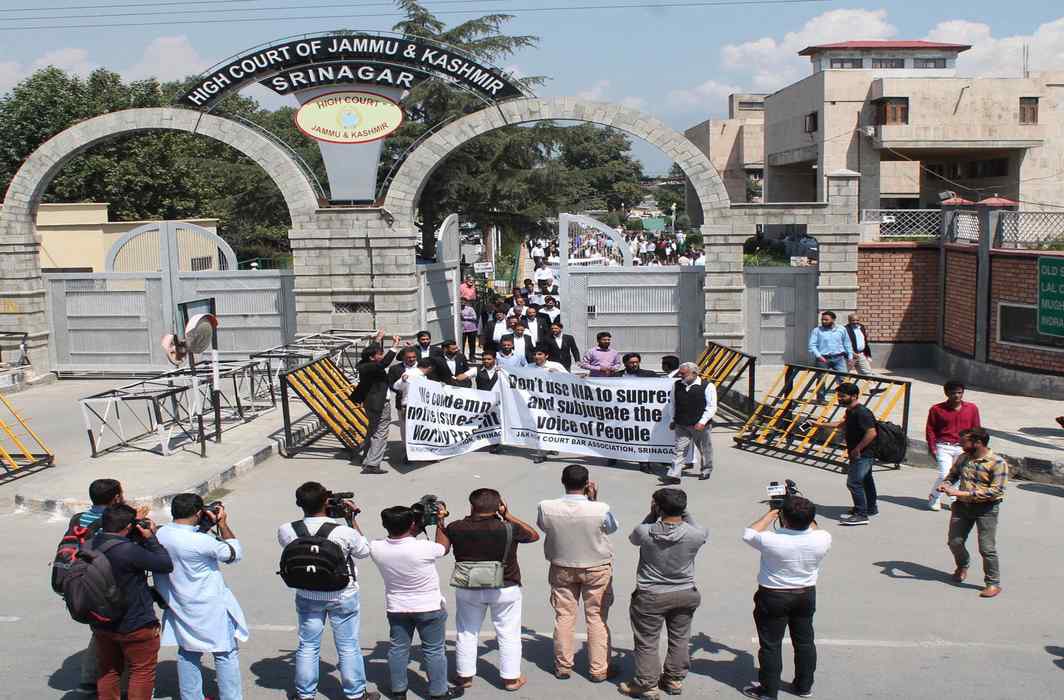 In a strongly worded judgment, the Jammu and Kashmir High Court pulled up lawyers who had been on strike for 43 days and said their conduct was a blatant violation of the mandate of law

In an unprecedented move, the Jammu and Kashmir High Court cracked the whip on lawyers in general and the powerful Jammu-based J&K High Court Bar Association (JKHCBA) in particular and declared their 43-day-old strike illegal for inconveniencing litigants, staff and the general public.

A division bench of Chief Justice Gita Mittal and Justice Rajesh Bindal quoted extensively from pronouncements of the Supreme Court to observe: “The mere call for meeting, or the very decision to proceed on strike; remaining absent from court and boycott of judicial proceedings; locking the courts, preventing entry to those wanting to enter are completely illegal rendering all persons responsible for the same for appropriate action as mandated by the Supreme Court of India. This conduct tantamounts to criminal contempt of court in terms of the law laid down by the Supreme Court of India.”

The bench added: “This conduct also calls for action in accordance with the Jammu and Kashmir Advocates (Regulation of Practice in the High Court and Subordinate Courts) Rules, 2003. We have no manner of doubt that such conduct is in blatant violation of the mandate of law, in the clear pronouncements of the Supreme Court of India cannot be countenanced or condoned. As observed by the Supreme Court, we would become party to such violations if we continue to ignore such actions which have been held by the Supreme Court to be clearly contumacious and falling under the serious category of criminal contempt of court, professional misconduct and even criminal offences.”

The court suo motu initiated two PILs concerning the strike and the need for “discipline and congenial atmosphere” by litigants, public, the judiciary, its staff and members of the Bar “to ensure effective and fair judicial dispensation to the people”. It quoted extensively from the apex court’s rulings in cases such as Ex-Capt. Harish Uppal vs. Union of India & Anr (delivered on December 17, 2002); Hussain & Anr. vs. Union of India (March 9, 2017)  and Krishnakant Tamrakar vs. State of Madhya Pradesh (March 28, 2018).

Based on an on-the-spot report of the principal district and sessions judge, Jammu, the Court named four advocates for “spearheading the protestors”,  “enforcing the closure along with their associates”, displaying “arrogance to the extent that they actually put a lock on the main gate” and removed “its key which was kept in their custody”.

The Court ordered show-cause notices to be issued, asking them to explain why they should not be proceeded against for criminal contempt of court under relevant rules of the Jammu and Kashmir Advocates (Regulation of Practice in the High Court and Subordinate Courts) Rules, 2003, as well as for the acts which are penal under the provisions of the Indian Penal Code.

Taking a serious view of “the conduct of those who have indulged in provoking the contumacious conduct as also the  obstruction of access to the District Courts”, the bench stated that it is “unpardonable and must invite stringent action in accordance with law”.  The bench expressed “greatest pain and dismay” that the assurance given by the JKHCBA, after the Supreme Court took suo motu cognisance of the attempt by some lawyers to obstruct their colleague from representing the family of the victim in the Kathua rape case, was belied by “several recent events”. It recalled an affidavit filed by the Bar Association in the apex court on April 24, 2018, which, the bench noted, was an “admission” that “it was conscious of the law as well as the methods of agitation which could be adopted by it” while exhibiting “its awareness that no obstruction or threat could be extended to counsels appearing in a case”.

This was after the Supreme Court had on April 13, 2018, issued a notice to the JKHCBA, among others, and recorded: “It is settled in law that a lawyer who appears for a victim or accused cannot be prevented by any Bar Association or group of lawyers, for it is the duty of a lawyer to appear in support of his client, once he accepts the brief. If a lawyer who is engaged, is obstructed from appearing in the court or if his client is deprived of being represented in the court when he is entitled to do so in a lawful manner, that affects the dispensation of justice and interference with the administration of justice. In fact, this Court has held that a Bar Association cannot pass a resolution that they would not defend an accused in any particular case. It is the duty of the Bar Association as a collective body and they cannot obstruct the process of law.”

In the two rulings that both the justices dealt with, apart from the conduct of lawyers and the JKHCBA, they also referred to the security scenario within court premises, the role of designated senior advocates and the seriousness of cases pending before the judiciary. They ordered deployment of a central armed police force in the High Court and all district courts in the UT of J&K as the “local police is unable to manage the situation”. In this regard, they said that posters by militants had appeared in the Court complex in Srinagar after August 5. “On September 7, posters threatening suicide attacks on the judiciary were pasted with impunity in the Srinagar court complex.” They found it “unique” that even senior advocates had been exposed to the charges of provocative actions and utterances on social media and elsewhere. “This information shall be verified and action shall be taken,” they unambiguously stated.

The JKHCBA had declared an indefinite strike from November 1 in protest against the transfer of power of land registration from the judiciary to the revenue department and the move to shift the HC premises to a forest area. It later narrowed down its struggle only to the first issue as it got an assurance that there was no move to relocate the High Court. On December 10, the ice was broken at a meeting between KK Sharma, adviser to Lt Governor GC Murmu, and representatives of the JKHCBA. The former assured the lawyers that their concerns would be addressed. The adviser, however, did not accede to the main demand, asserting that the registration authority has been vested in revenue officers in line with the practice in the rest of the country and it was “a step towards having a Uniform Registration System”.

After the High Court spoke up on December 11, the JKHCBA called off its strike saying that it “will resume work in all courts including the High Court from December 18”. It also announced its decision to “unitedly” contest the show-cause notices to the protesting lawyers.

Clearly, the High Court’s intervention had become unavoidable. An unintended beneficiary is the government as the first prolonged protest in the region has come to an abrupt end against its policy to ensure parity between laws in the rest of the country and the UT of J&K after Article 370 was rendered toothless. The lawyers’ strike that began with a bang has ended with a whimper.

Lead pic: File photo of a lawyers’ protest outside the Jammu and Kashmir High Court in Srinagar