Opposing his bail plea, the public prosecutor had stated that the accused didn’t show any proof of identification of him being a journalist. He had also submitted that Punia had dragged and assaulted police officers. 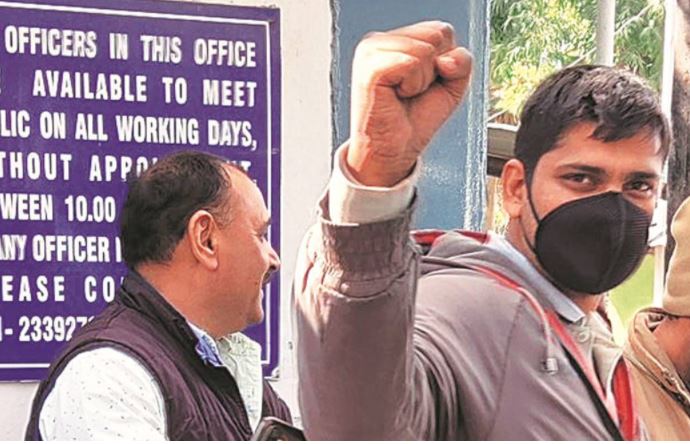 A Delhi court granted bail to freelance journalist Mandeep Punia who was arrested by Delhi Police from Singhu border during farmers’ protests.

Chief Metropolitan Magistrate Satvir Singh Lamba pronounced the bail order while stating there is no possibility he can influence the witnesses as the complainant, victims and witnesses are all police personnel.

The bail order stated that the accused is a freelance journalist, more so no recovery is to be effected from the accused person. Further keeping the accused in judicial custody would not serve any cogent purpose. It is a well settled legal principle of law that ‘bail is a rule and jail is an exception’.

Considering the totality of facts and circumstances of the case, submissions on behalf of both the parties as well as keeping in view the period of detention of the accused in judicial custody, the court admitted the accused to bail.

Opposing his bail plea, the public prosecutor had stated that the accused didn’t show any proof of identification of him being a journalist. He had also submitted that Punia had dragged and assaulted police officers.

In his bail application, Punia said that he was arrested for not showing a press card and there was a delay of seven hours in registration of the FIR. He claimed that not carrying a press card cannot be a ground for a case or arrest.

Advocate Sarim Naved, Akram Khan and Kamran Javed, appearing for petitioner, had submitted that there was no video evidence which contradicts the FIR, which is anyway in public domain by now. Punia is a well-respected person in society and he is not in a position to influence the witnesses as the witnesses are police officials, they said.

On the other hand, Delhi Police had submitted there was some scuffle at Singhu Border between policemen and a group of 10-15 people. Following the scuffle, Captain Rajkumar fell into a drain. Thereafter, the alleged person was overpowered and caught, he was identified as Mandeep Punia. The police strongly objected to the bail, claiming that Punia may indulge in instigating protesters, creating nuisance at the protest site with his group.

However, the court examined the matter and found that the scuffle with the police which eventually led to Punia’s arrest was stated to have taken place at 6.30 pm on Saturday, the FIR against him was only registered at 1.21 am the next day.

The court observed that the complainant, the victims and the witnesses in the case were all police officials. Hence concluded that there was no possibility of Punia influencing the course of the case if he were enlarged on bail.

Therefore, the Court has granted the release of Punia on bail, subject to furnishing bail bond in a sum of Rs.25,000/- along with one sound surety in the like amount, among other bail conditions.

Mandeep-PuniyasignedDownload
Did you find apk for android? You can find new Free Android Games and apps.
Share
Facebook
Twitter
Pinterest
WhatsApp
Previous articleSC upholds bail granted under UAPA to man accused of chopping off Kerala professor’s hand
Next articleDelhi Police says it could not identify policemen who beat up Faizan, others during Delhi riots 2020, tells HC that it questioned 170 policemen