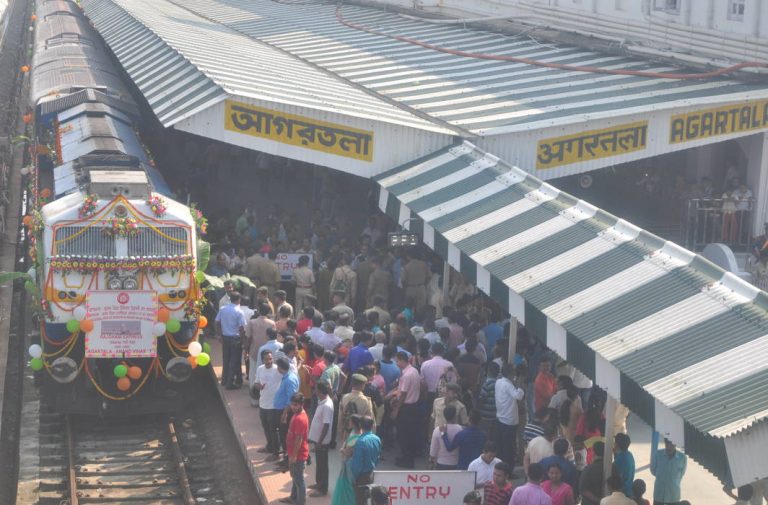 Above: The influx of outsiders threatens the Tripuri way of life and culture/Photo: UNI

After Assam, many in Tripura are asking the apex court to get a registry compiled there as the huge number of migrants has changed its demographic pattern

Political parties use the bogey of foreign nationals when they wish to drum up support ahead of elections. Amit Shah, the BJP president, has already ratcheted up the rhetoric by dubbing illegal mig­rants as “termites’’ eating into the vitals of the nation. This kind of talk might appeal to a section of voters, but can also come back to haunt the BJP.

The updating of the National Register of Citizens (NRC) in Assam has led to demands by other states for a sim­ilar exercise to throw out illegal migrants. The indigenous people of Tri­pura are knocking at the doors of the Sup­reme Court to get an NRC compiled there as in Assam. No other state barring Assam has an NRC.

In Tripura, the unchecked influx of migrants has completely changed the demographic pattern. The original inhabitants of Tripura have long been reduced to a minority by Bengali Hindus from both West Bengal and Bangladesh. On October 24, Pradyot Debbarman, son of the last king of Tripura, Kirit Bikram Kishore Manikya, filed a petition before the Supreme Court asking for the compilation of an NRC for his state. Debbarman’s is the second petition filed on this issue in the top court; the first being by the Tripura People’s Front.

Though Debbarman is the Congress working president of Tripura, he has not filed this petition on behalf of his party. “I am going to the Supreme Court as a citizen of India on behalf of my community, the indigenous people of Tripura. We have been reduced to a minority in our homeland and I want the NRC to be updated in our state,” he told India Legal. But why now, after so many decades? “We are now educated and aware of what is happening to our community. We have been deprived of everything. Our land has been taken away, our culture, our existence is at stake. What are we supposed to do?’’ asked Debbarman. “Let the government of India tell us clearly if there are two sets of laws. One for the rest of the country and one for us.’’

He recalled that after Independence when Tripura decided to become a part of India, the ruling family was promised that the culture, identity and way of life of the indigenous people would be safeguarded. These promises were not kept.

Did the Congress back Debbarman’s decision? “This has nothing to do with the party I belong to. I don’t know what its position is on the issue,’’ he said. Ironically, the Congress is blamed by people in Assam for helping the illegal influx from Bangladesh and getting these people registered as voters to keep the party in power. In Assam, the Congress is raising its voice against thousands of genuine citizens who have been left out from the draft NRC. The party is questioning the process by which citizenship is being determined as the poor and illiterate possess no documentation. Fighting Debbarman’s case is none other than Salman Khurshid, a former UPA minister and a Congress stalwart.

This is not the first appeal from Tripura for an NRC. The Tripura People’s Front, a political party of indigenous people, had filed a petition in the Sup­reme Court for a similar registry of citizens. That was heard by a three-bench judge, which included Chief Justice Ranjan Gogoi, on October 8. The Court has issued a notice to the centre, the Census Commissioner and the Election Commission to give their views on the matter. Perhaps all cases will be heard together. All indigenous people of Tripura, including members of the BJP’s coalition partner in the state, Indi­gen­ous Nationalist Party of Tripura, support this move. How this will work out is hard to say.

In Assam, the cut-off date for determining citizenship is the midnight of  March 24, 1971, a day before Bangladesh declared independence. The date was part of the Assam Accord. All those who entered the state after that date would be regarded as foreigners. Will the same date apply to Tripura as well? The entire exercise will open a can of worms. What can be achieved now by updating the NRC? In Assam, over 40 lakh names have been struck off, and many genuine Indians have to prove they are citizens. What will be the cut-off date for Tripura?

Perhaps the regional parties in Tripura are hoping to focus attention on their plight in order to convince the centre that the culture and way of life of the original inhabitants can only be preserved if they get a state of their own. Tripura is dominated by Beng­alis and locals have to play second fiddle.

The locals of Tripura have every right to complain. The demographic changes have been the most startling here. But the damage has been done. So the demand now is to convert the tribal districts into a separate state for indigenous people who have been reduced to a minority. These indigenous groups include the Tripuris (the largest), the Reangs and the Jamatias. But much of the inflow into Tripura is also due to historical factors.

Outsiders came into Tripura after the king converted to Hinduism and became a staunch Vaishnavite around 1470. As they were converted by the Vaishnavites in Bengal, the royal family favoured Bengalis. It had close connections with Bengal.

The king brought in not just priests, but a large number of Bengali-speaking Hindus into the kingdom. In fact, Bengali became the official language of the state. Bengali settlers were also brought in for cultivation.

The new settlers, unlike the original inhabitants, who moved from place to place, cultivated the same fields and provided the royal treasury with a permanent means of revenue.

With the arrival of the British in eastern India, the kings of Tripura continued to rule over the state, but paid tribute to the British. After Indepen­dence, when East Pakistan was formed, thousands of Hindu families migrated to Tripura. This process continued as Hindus poured into the state during times of riots or for economic reasons. Bengali Muslims also trickled in, mainly because Tripura was sparsely populated and there was plenty of agricultural land for the new settlers.

Tripura’s connections with West Bengal remained strong. When the Congress was in power there, Tripura too had Congress governments. The rise of the Left in Bengal politics saw the CPI(M) gather momentum in Tripura. The Communists worked among the tribals closely and spread literacy and encouraged the Kokborok language of the indigenous people.

Though many of the locals voted for the CPI(M), a section of the youth felt that the tribals had been given a raw deal. The Tripura Upajati Juba Samiti was formed in 1977 and they demanded a better deal for the local people who had lagged behind the more progressive Bengali settlers. The demand for a separate tribal state began around this time. Tripura witnessed several violent clashes between the Bengali speakers and the indigenous groups through the Eighties and the Nineties. Though the situation has improved, the demand for a separate tribal state has now become more vocal. Every regional political party in Tripura wants a separate state for the indigenous people.

Debbarman said: “Implementing the NRC in Tripura will immediately dilute the demand for a separate state because those currently demanding Tipraland are doing so because they feel they have lost all rights within their native state.”

For the BJP which had hoped to gain goodwill in the Northeast by supporting the move to clear the region of illegal migrants, there is a twist in the tale. The Hindutva forces want Bangladeshi Muslims out, but want Bengali Hindus not to be touched.

Assam is already protesting against the BJP’s move to accept Bengali Hindus as citizens. The Assamese fear that this is a conspiracy to allow Bengali Hindus to make Assam their permanent home. In Tripura, if an NRC is compiled, those affected will mainly be Bengali Hindus.

With general elections round the corner, the BJP will be in a spot if the Supreme Court gives in to Tripura’s demand.