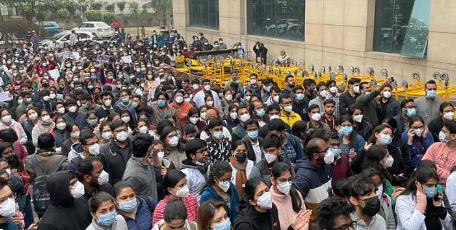 After the Centre sought an urgent hearing on the Economically Weaker Section (EWS) quota in connection with the NEET PG admissions, the Supreme Court has decided to hear the Union government plea tomorrow.

A bench of Chief Justice of India Justice N.V. Ramana, Justice Surya Kant and Justice Hima Kohli took note of the submissions of Solicitor General Tushar Mehta that the matter pertains to admissions to post-graduate medical courses and that the students have been facing difficulties.

Solicitor General Mehta, appearing on behalf of the Centre had yesterday submitted the request for an urgent hearing. The request was made following the massive protests by doctors/ students waiting for admissions to the various post-graduate medical courses.

Counselling has been stalled after the court’s question on the maximum annual income limit of Rs 8 lakh for 10% reservation of economically weaker section in medical PG admissions.

The Centre had in July 2021 said that 27 per cent OBC reservation and 10 per cent EWS reservation will be extended to all medical seats under the central pool from 2021-22 academic year.
Earlier a 3-judge bench of Justices Chandrachud, Surya Kant and Vikram Nath was hearing the plea.