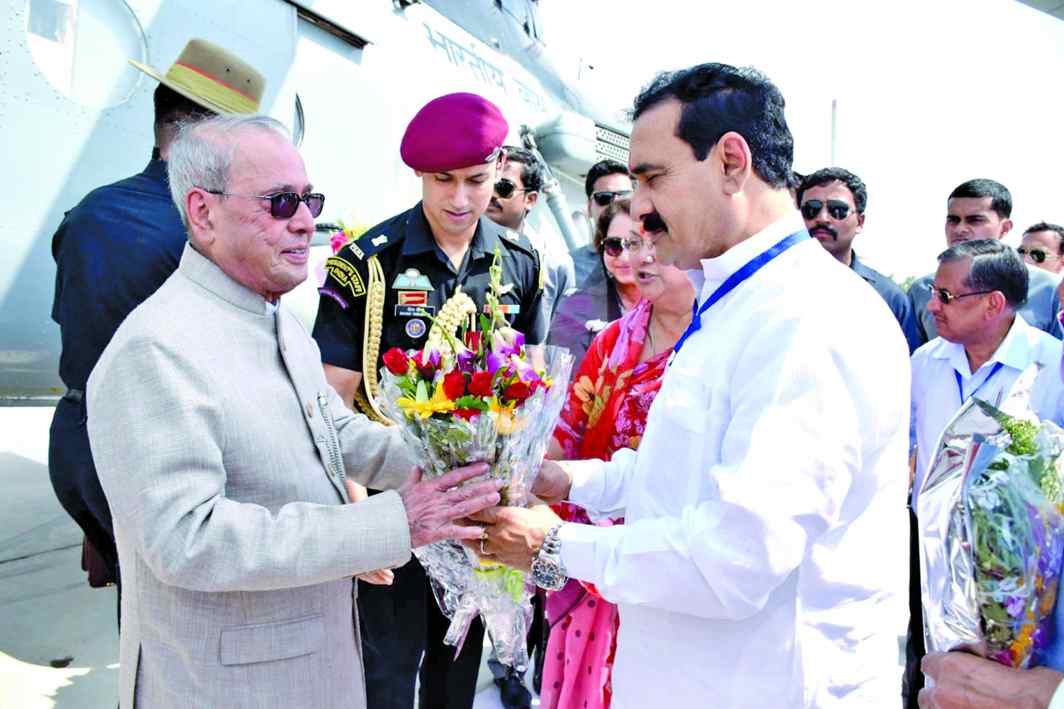 Above: MP’s Minister of Public Relations Narottam Mishra welcoming President Pranab Mukjherjee on his arrival at Datia in June this year. Photo: UNI

In a first case of paid news before a high court, an MLA who was disqualified for three years by the EC, has appealed, saying there is no proof

The Election Commission’s decision to disqualify an MLA for furnishing wrong accounts of his poll expenditure has been legally challenged. Madhya Pradesh’s minister for water resources and public relations Narottam Mishra has challenged his disqualification for three years under Section 10A of the Representation of the People Act, 1951. And the verdict is likely to be pronounced in the Madhya Pradesh High Court’s Gwalior bench soon.

Section 10A empowers the Election Commission (EC) to disqualify a candidate if he fails to submit an account of his poll expenses in time and in the manner required by the Act. In Mishra’s case, the money spent by him on paid news did not reflect in his poll expenses account filed with the EC.

Paid news is the practice of disguising advertising as journalism and where mainstream media publishes favourable articles in exchange for payment. Mishra is the second MLA in India to be disqualified on this account. The first was a BSP MLA from UP, Umlesh Yadav, who was disqualified in October 2011. She was elected to the Bisauli constituency in 2007. Wife of controversial politician DP Yadav, Umlesh was disqualified for failing to provide a “true and correct account” of her election expenses. She had failed to include the amount she had spent on advertisements which were dressed up as news during her election campaign. Umlesh did not challenge her disqualification. So, Mishra’s disqualification is the first case of paid news that has come up for hearing before a high court bench.

Significantly, India’s top lawyers have involved themselves in the case. While Congress’ Rajya Sabha members Kapil Sibal and Vivek Tankha are to appear on behalf of the complainant, former attorney general of India Mukul Rohtagi has agreed to defend the minister. They were scheduled to appear in Court on July 5 for final arguments but, owing to a lawyers’ strike, the single-bench headed by Justice Vivek Agrawal reserved the verdict for July 10. Therefore, the lawyers did not come and in their absence, Mishra and the complainant, Rajendra Bharti, pleaded their case.

Mishra sought a stay on the EC’s order as there was “no proof that he had paid money for the news”. Besides, he said, the case pertained to the 2008 assembly election and he had already won the 2013 assembly election from the same constituency. He has described the order as “anomalous and based on imagination and possibilities”. Mishra, who is the government’s spokesman, is considered the number two in the Shivraj Singh Chouhan cabinet.

Mishra’s lawyer MPS Raghuvanshi said: “We have made a plea to the court that the EC order is not based on any proof that Narottam Mishra gave money for the news. So we are urging the court that until investigation into the matter is completed, it should stay the order.” 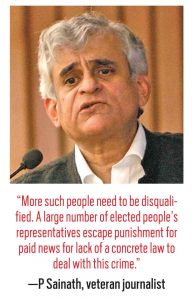 In May 2014, the Supreme Court had dismissed a petition by former Maharashtra Chief Minister Ashok Chavan challenging the authority of the EC to investigate complaints that candidates contesting elections had paid for news coverage. The apex court ruled that the EC had the power to inquire into complaints of paid news and disqualify candidates if expenditure on such ads was not reported as part of a candidate’s election spending.

Mishra’s so-called paid news appeared 42 times in the form of an appeal for votes in various newspapers in the run-up to the assembly polls in November 2008. He won on a BJP ticket from Datia assembly seat, defeating his nearest rival and BSP candidate Rajendra Bharti who later joined the Congress.

In its order, the EC stated that Mishra “was complicit in the publication of the impugned paid news as news items and has derived benefit from and taken advantage of the same, without reporting or acknowledging it, and thereby attempting to bypass the rigours of the law”. It further said: “As laid down under Section 7(b) of the Representative of the People Act, 1951, Mishra stands debarred from being member of either Houses of the state legislature and also from contesting polls for three years from the date of issue of the disqualification order.”

Last year, the EC questioned Mishra in Delhi about the allegations made in the disqualification petition, but was not satisfied with his clarification. It has taken the view that even if it was true that he had made no payment, he ought to have included a notional amount in his accounts.

Also, candidates cannot simply claim that these reports were not authorised by them. As long as the intention to boost someone’s prospects is clear, and there was no objection from the candidate, the EC can rule that there was “implied authorization”. Three days after he was disqualified, Mishra moved the Gwalior bench of the High Court which refused to grant a stay on his petition but issued a notice to the poll panel seeking its reply by July 5.

Even as the High Court decision is awaited, a wordy duel is taking place between the Congress and the BJP. While Mishra said his disqualification was a “conspiracy to thwart development works he has been carrying out in his constituency”, BJP state president Nand Kumar Singh Chouhan described the EC’s order as dooshit (contaminated) and ruled out action against the minister. Speaker Sita Sharan Sharma questioned the EC’s power to debar an MLA. “The power to disqualify an MLA is vested with the governor and he is yet to take a call on the order,” he claimed.

Meanwhile, the Congress has sought the immediate resignation of Mishra. “It has been proved how BJP ministers are winning polls,” said the leader of the opposition, Ajay Singh. State Congress president Arun Yadav echoed his party colleague.

Veteran journalist P Sainath, who has written extensively on the phenomenon of paid news, said the minister’s disqualification is a welcome sign for democracy. “But more such people need to be disqualified. A large number of elected people’s representatives escape punishment for paid news for lack of a concrete law to deal with this crime,” he told India Legal.

Senior journalist Paranjoy Guha Thakurta said he was delighted to know that a minister had been disqualified for paid news. “This will hopefully set a good precedent for the poll panel to penalise many more such offenders in future,” he said. Thakurta was one for the two members of the Press Council’s sub-committee that highlighted the problem of paid news in a report in April 2010.

It is obvious that politicians need to be careful as the EC is keeping a close watch.