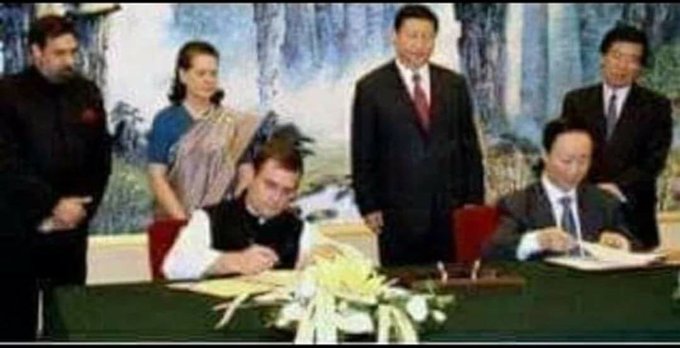 A party to party agreement signed between the Congress Party and the Chinese Communist Party in 2008 when the Cong led UPA was in power has now become the matter of a political slugfest besides being the subject of a petition filed in the Supreme Court.

A group of lawyers on Wednesday petitioned the apex court seeking a probe by the National Investigation Agency into the alleged links of the Congress’s first family Sonia Gandhi and Rahul Gandhi with leaders of the Chinese Communist Party. Posting a picture taken on the day the deal was signed, ace lawyer Mahesh Jethmalani also demanded an NIA inquiry. The senior advocate said that the agreement signed in the presence of Sonia Gandhi and current Chinese premier Xi Jinping has possible sinister implications for the country’s security and called for a probe by NIA into the agreement under the stringent UAPA. He also said that the NIA should secure the agreement.

According to the reports, the lawyers who have filed the petition in the apex court has asked for an investigation into the details of the MoU signed between the Congress party and the Communist Party of China in 2008 during the UPA era. Reports say this party to party relationship could be  similar deals between parties. Unlike India, China remains a one party state, the Chinese Communist Party is enshrined in China’s constitution and is permanently the party at the helm of affairs in the country. The petitioners have asked the apex court to direct the NIA to investigate the agreement between the Congress party and the CPC under the stringent provisions of the Unlawful Activities (Prevention) Act, 1967.

The agreement signed by the Congress party with China’s Communist Party has gained significance after the recent stand-off between India and China at the Galwan valley along the LAC in Ladakh.

The agreement was signed between the two parties on August 7 in 2008 in Beijing for exchanging high-level information and co-operation between them. The memorandum of understanding (MoU) also provided the two parties with the “opportunity to consult each other on important bilateral, regional and international developments”.

There are those who feel that a probe is very much warranted. “Suppose the Government of India calls the principal opposition party to confidential discussions on disputes with China or Pakistan. If as per MOU they are required to share important information with Chinese Communist Party won’t such MOU be against national interest?”, said a senior leader.

The petition has been filed by Advocate Shashank Shekhar Jha and Journalist Savio Rodrigues who has submitted that the Memorandum of Understanding (MoU) also provided the two parties with the “opportunity to consult each other on important bilateral, regional and international developments”.

The petitioners have submitted that according to various media reports, “there occurred multiple intrusions/faceoff (nearly around 600) between 2008 to 2013 from China’s side in Bharat when UPA was ruling the Nation and it is a matter of record that the MoU signed between China and Respondent No. 1 was a party to party agreement despite of the fact that both were ruling party which may have matter involving national importance.”

It has further been informed that Journalist Savio Rodrigues in his editorial dated 18.06.2020 published in Goa Chronicle demanded Rahul Gandhi to make the said MoU public however it was never made public.

The petitioners have alleged that despite having hostile relations with China, the India National Congress signed an agreement when it was ruling the collision led government and never declared the details of the agreement with the country.

The petitioners have submitted that it was the Indian National congress which brought the Right to Information Act in India however it never disclosed the details of the agreement and failed to be transparent in a matter which is of national importance.

The petitioners have thus submitted that “the true spirit of liberty, equality, and fraternity could be achieved through medium of transparency and proper investigation and just judgment which could be achieved only if the agreement is investigated and secured by National Investigation Agency (NIA) under the Unlawful Activities (Prevention) Act, 1967.”