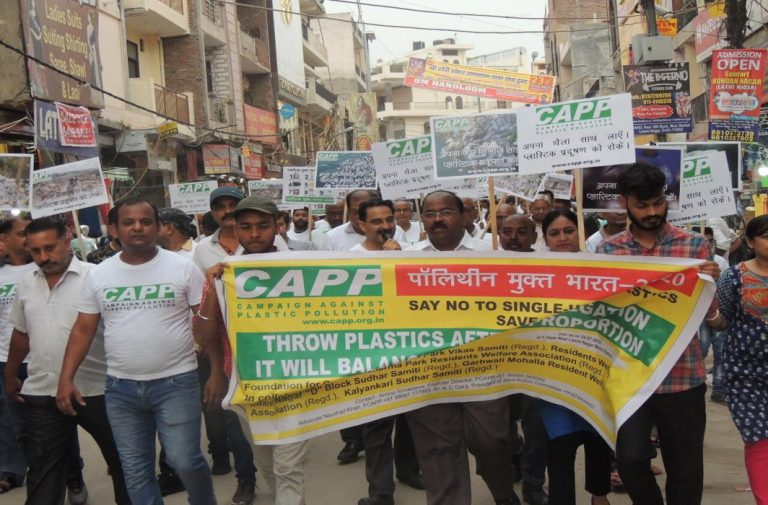 On Saturday, the 20th July, 2019, the Foundation for Campaign against Plastic Pollution (F-CAPP) organized a massive road show against “SINGLE-USE PLASTICS POLLUTION” in Laxmi Nagar Market area starting from Laxmi Nagar Metro Station and concluding at DDA Lalita Park. It covered Vijay Chowk, Sabzi Mandi, M-Block, J &K Block, Lalita Park, H & I Block in Laxmi Nagar. F-CAPP aims to mobilize social and other media to generate awareness about the environmental damage caused by disposable plastics and the long term repercussion that has already started showing around the world.

Single-use plastic is cheap and hence its use is ubiquitous. Grocery bags, food packaging, bottles, straws, containers, cups & cutlery items intended for single use are constantly being consumed and dumped. The enormous non-biodegradable waste created sits in landfills or reaches oceans where it takes thousands of years to decompose, exposing the world to toxic chemicals returning to the human food chain or simply choking hundreds of animal species of land, air and water. Organizations around the world are fighting to reduce plastic use.

The participation witnessed in the event was very reassuring; continued efforts in this direction will hopefully bring behavioral changes in people and industries in reducing the plastic footprint in the society.

Since its inception in February this year, F-CAPP has worked tirelessly towards awareness campaigns against plastic pollution. The first awareness drive was launched at Sarojini Nagar market on 27th April, 2019. A road show was organized at Karol Bagh market on 18th May, 2019. Third road show was organized at Lajpat Nagar market on 1st June, 2019. The fourth event of the Foundation was “Stop Single-Use Plastics” campaign at Chittaranjan Park on 6th July, 2019. The latest road show at Laxmi Nagar market – the fifth in the series – has received wide acclaims and appreciation.