The Centre has given telecom service providers time till 11.59 pm to clear their dues, hours after the Supreme Court lashed out at Bharti Airtel and Vodafone Idea for not paying their adjusted gross revenue (AGR) to the tune of Rs 1.47 lakh crore due to the government.

The court issued contempt notice and directed the top officials of the telecom companies along with the officials of department of telecommunications (DoT) to be present in court during next hearing.

The court began contempt proceedings by issuing notice to the telecom companies and DOT official the court seeking their response on why contempt action should not be carried out against them.

“Should we wind up the Supreme Court? A desk officer considers himself judge and stays our order. Who is the desk officer? A desk officer says coercive action not to be taken until further orders. How can he stay our orders,” said Justice Arun Mishra.

The battle between the telecom companies and the government ended after 14 long years in the SC. The companies had rejected DoT’s claim that items like dividend, rent and interest were part of AGR, and thus the companies argued that they also need to be included while calculating their taxes. I

As per government of India licence fees of 8% of AGR on telecom licensees, Vodafone Idea owes over Rs50,000 crore and Bharti Airtel owes Rs 35,586 crore.

Tata Teleservices, which sold its enterprise to Airtel,  has to pay around Rs 14,000 crore.

However, Jio is the only operator to have paid its dues. It only owed an amount of Rs 60 crore which began operations in 2016.

Bharti-Airtel claims to have raised funds to pay the dues, whereas Vodafone has declared itself bankrupt. 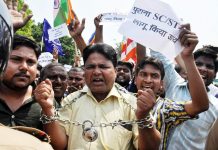