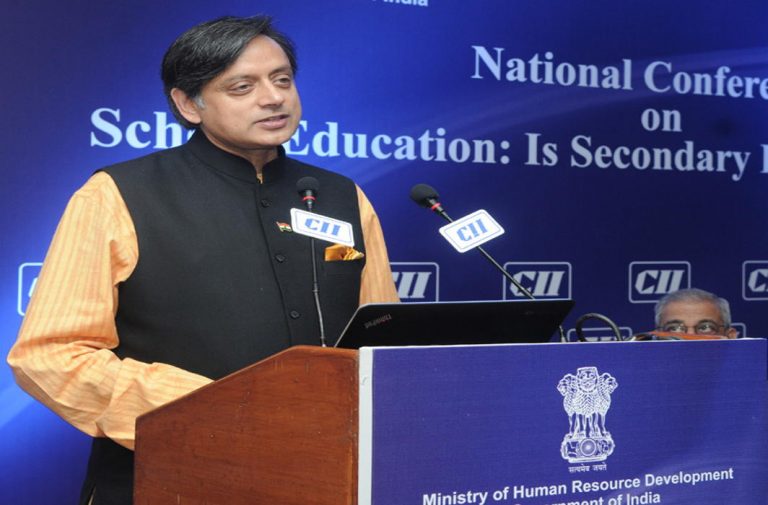 Two days after he was granted anticipatory bail in the case involving the suicide of his wife, Sunanda Pushkar, Congress MP Shashi Tharoor – charged with abetting the  suicide – was, on Saturday (July 7), given regular bail by the Patiala House Court.

Tharoor, the Congress MP from Kerala’s Thiruvananthapuram constituency, was present in the courtroom when the Additional Chief Metropolitan Magistrate (ACMM) Samar Vishal asked him to furnish a bail bond worth Rs 1 lakh and converted his anticipatory bail to regular bail.

On July 5, while hearing Tharoor’s plea for an anticipatory bail, Special Judge Arvind Kumar had observed that the prosecution’s apprehensions that the Congress leader may flee the country or influence witnesses in the case of his wife’s death were “without any basis”. The court had granted him anticipatory bail and asked him to furnish a personal bond and a surety of Rs 1 lakh each while imposing certain conditions, including that he would not tamper with the evidence or leave the country without the court’s permission.

Significantly, Saturday’s proceedings over Tharoor’s plea for being granted regular bail saw his battery of lawyers as well as Additional Public Prosecutor (APP) Atul Shrivastava, appearing for the State, questioning the interests and locus standi of BJP leader Subramanian Swamy in being allowed by the court to assist the prosecution in the case.

Swamy, who was also present in the courtroom, appealed to the court to direct the Delhi police to produce the report of the vigilance inquiry conducted in the case earlier and alleged that the police had tampered with the evidence to shield Tharoor.

After hearing all the parties, ACMM Vishal passed his order stating: “The accused Dr Shashi Tharoor has appeared in pursuance of summons issued by this Court. He has already been admitted on anticipatory bail by learned Sessions Court… In compliance of the order of learned Sessions Court, accused furnished bail binds. The bail bonds are accepted.”

The court noted that the Delhi police have filed the reply of the application moved by Swamy and a copy of this had been furnished to the BJP leader.

The ACMM also ordered that scrutiny of all documents related to the case and consideration of the application moved by Swamy will be carried out on July 26 at 2 p.m.

Following the court proceedings, Tharoor took to Twitter to assert that he will “continue to cooperate with the authorities as the judicial process unfolds”.

Appeared before learned ACMM Samar Vishal at Patiala House Court today & filed surety as required. As I have done throughout, I will continue to co-operate w/the authorities as the judicial process unfolds. My conscience is clear & I remain confident that justice will prevail.

Swamy told reporters after the court’s order that “the Delhi Police and counsel for accused said my position is not maintainable. I argued that under Section 302 of CrPc, I am entitled to do so. The question of maintainability is irrelevant. I am here to see that the trial is fair and that the Delhi Police does not botch it.”