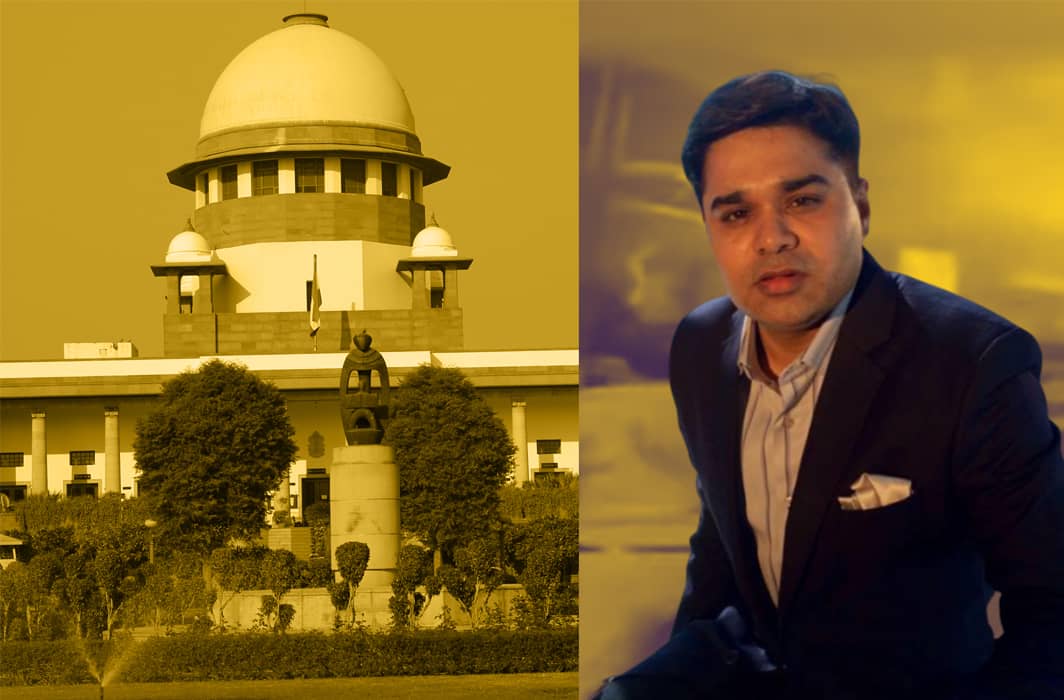 New Delhi (ILNS): The Supreme Court today reserved its order in the plea challenging the FIRs registered against News Anchor Amish Devgan on his remarks on Sufi saint Khwaja Moinuddin Chishti. The Court had earlier issued an interim stay on the investigations relating to all the FIRs.

A division Bench of Justices A.M. Khanwilkar and Sanjiv Khanna has asked for original FIRs to be put on record in the language that they were registered in. The Court has also asked the petitioner to file all written submissions in a week and its replies to be filed in the next week.

Senior Advocate Siddharth Luthra, appearing on behalf of the anchor, cited a Constitution bench judgement stating that the section 153B of IPC only punishes when there is a deliberate and calculated intent to disrupt the public order and create religious disharmony. He added that in the case of Manzar Syed Khan it was noted that the test of quashing is if the speech is of aggravated form and with the intent of disrupting public order.

Luthra submitted that the Registration of FIR all over India is interesting but a mala fide exercise as multiplicity of FIRs will make it impossible for an individual to work as a journalist.

He cited the judgement in TT Antony v. State to discuss if multiple FIRs can be filed on the same set of facts. The case of TT Antony was followed in the Babu Bhai case and the test is to see whether it is the same incident, where the Court has to check if the occurrence is of same incident. If the answer is yes, then the second FIR is liable to be quashed and in the present case, every FIR relates to the same incident of June 15.

Talking about the FIRs filed in Ajmer, he stated that it needs to be quashed because that man has not seen the show and Ajmer does not have jurisdiction.

Counsel Manish Singhvi appearing for Rajasthan submitted that certain abuses were used which hurt people’s feelings. Even if the Petitioner rendered an apology, truth remains that sentiments were hurt, and offensive language was used.

Advocate Rizwan Merchant appearing on behalf of Maharashtra submitted that if FIRs have been lodged against Devgan for using offensive words and hurting sentiments, whether it has been done maliciously and deliberately needs to be investigated. What also needs to be investigated is why the apology was rendered after 30 hours, if it was done because of the trolling or was he forced to do it.

Merchant added that this is not a trivial issue as bringing Khwaja Garib Nawaz into a conversation of Alauddin Khilji does not make sense because Khwaja Chisti was dead and gone when Khilji had invaded. This is a point of probe and needs to be left open. It not about just Muslims as all communities see the show and have been hurt. In Ajmer, Hindus, Baniyas, they don’t open the shops without visiting the shrine.

According to Merchant, the petitioner does not deserve any relied, and is also not in this court with clean hands. The factum of the repetition by Devgan in the show citing Chishtis name and citing it thrice shows intention.

The Supreme Court on June 26, while issuing notice had directed that no coercive action to be taken against Devgan till the next date of hearing. The Court had again on July 8 extended its interim order and had given the anchor a two-week breather.

Amish Devgan had made the comment during a debate on a PIL about the Places of Worship (Special Provisions) Act on his show ‘Aar Par’. As per reports he had called Khwaja Moinuddin Chisti, also known as Khwaja Gareeb Nawaz, an “attacker” and a “lootera”.

The plea filed by Amish Devgn through Advocate Vivek Jain seeks quashing of the FIRs which have been registered against him under the following sections of the Indian Penal Code:

On June 17, the News Anchor had apologized for hurting the religious sentiments of the Muslims. He wrote

In 1 of my debates, I inadvertently referred to ‘Khilji’ as Chishti. I sincerely apologise for this grave error and the anguish it may have caused to followers of the Sufi saint Moinuddin Chishti, whom I revere. I have in the past sought blessings at his dargah. I regret this error.

Both the aforesaid vaccines have been found to be effective against Covid-19 and may provide adequate protection from the disease on successful administration of two doses of the vaccines, the petition highlighted.
Read more
India Legal
Did you find apk for android? You can find new Free Android Games and apps.