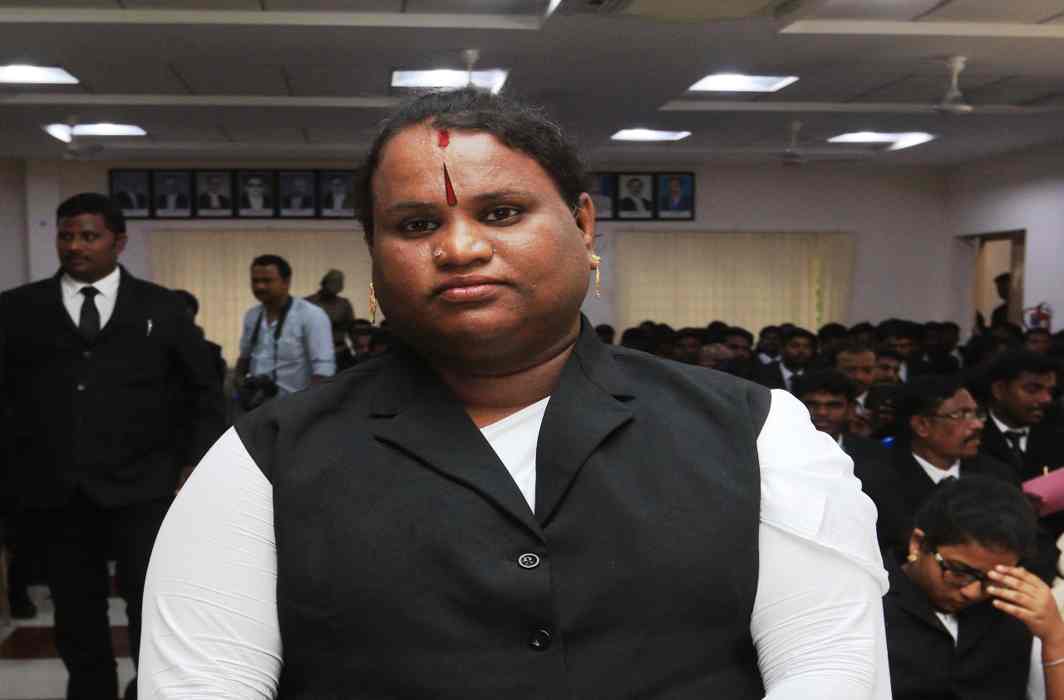 In an inspiring move, the Madras High Court has allowed a trangender to enrol herself in the Bar Council and thereby become India’s first trangender lawyer

Tamil Nadu created history by being the first state in India to enrol a transgender in a Bar Council. On June 30, the Tamil Nadu and Puducherry Bar Council allowed Sathyasri Sharmila, a 36-year-old transgender, to enrol herself as a lawyer.

At a function held at Madras High Court, Justice PN Prakash administered the oath of office to 600 law graduates, including Sharmila. Justice Prakash, known for his progressive outlook and humaneness, was full of praise and appreciation for Sharmila. He said: “I am very happy today. I was yearning for a transgender to become a lawyer for the past several years. Now I am administering the oath to a transgender. I am doubly happy because my long-time dream has got fructified during my life time.”

Sharmila was born in a village in Ramanathapuram district of Tamil Nadu. She finished her schooling and got a Bachelor’s degree in corporate secretaryship at a government college there. She then joined Central Law College in Salem district and got her law degree. Till she finished her law degree in 2007, she lived with a male identity and her name was Udhakumar.

In a telephonic conversation with India Legal, Sharmila said: “I was Udhakumar till 2007. After that, I decided to forgo my male identity. Once I decided this, I realised that I couldn’t live with my family any more. The immediate concern then was my elder brother who was getting marriage proposals. I have one elder brother and two younger ones. At that time, even my parents realised the practical difficulties of keeping me with them. Whenever a bride was fixed, the first question from her side was: ‘Who is this man?’ It was a nightmarish situation. So I myself voluntarily departed from my family and started living with a group of transgenders.”

Sadly for Sharmila, though she completed her law degree in 2007, she could enrol as a lawyer only in 2018 because application forms had one two categories—male and female. It was only in 2014 that a judgment by the Supreme Court paved the way for transgenders to enrol in the Bar Council.

“Till 2014, no government agencies were willing to address our problems. It was a National Legal Services Authority of India case that paved the way for transgenders to be recognised as a third gender. The judgment was delivered by Justices KS Radhakrishnan and AK Sikri. The Supreme Court directed both the centre and state governments to immediately grant legal recognition of gender identity to us. It ruled that transgenders are a third gender,” said Sharmila. This judgment, she said, turned their fate for the better.

What’s next for Sharmila? Will she practice law and head for greener pastures or continue to fight for the rights of transgenders, a work she has been doing for the past ten years?

“I am very clear in my mind. My primary duty is to work for the upliftment of transgenders. I will use my legal degree for that. We face several problems in our day to day life. Even to open a bank account we have to fight with bank managers. Though we are recognised as third gender, several governmental organisations continue to put us in the female category. We cannot allow this anymore. So as a lawyer, I will put my weight behind my transgender friends and help them get whatever they are entitled as per law,” said Sharmila.

Interestingly, the Madras High Court has been battling for the welfare of transgenders. On November 28, 2017, Justice N Kirubakaran directed the Tamil Nadu government to allot a Bachelor of Siddha Medicine and Surgery seat to Tharika Banu, a 27-year-old transgender, after she filed a writ petition. The judge also urged that all educational institutions should earmark a certain number of seats for the transgender community. He also directed the Tamil Nadu government to issue guidelines to streamline the procedure for appointment of transgenders in its services.

On July 8, 2016, after a PIL was filed, the Madras High Court directed the Tamil Nadu Social Welfare Department to consider providing three percent reservation to transgenders in education and employment by creating a separate class for them. The Bench comprising of Chief Justice Sanjay Kishan Kaul and Justice R Mahadevan had directed the state government to take a decision within six months. The PIL said most transgenders were chased away from their respective families, and added that if the government comes forward to protect them by generating adequate opportunities and reservations in education and employment, none of them would get involved in illegal activities. The bench accepted this argument and urged the state government to give a serious thought to these submissions and take appropriate steps to eradicate the hardships of transgenders.

In fact, Tamil Nadu is the first state to constitute a Transgender Welfare Board in April 2008. After that, Andhra Pradesh and Kerala followed suit.

Talk about paving the way for a better future for transgenders.