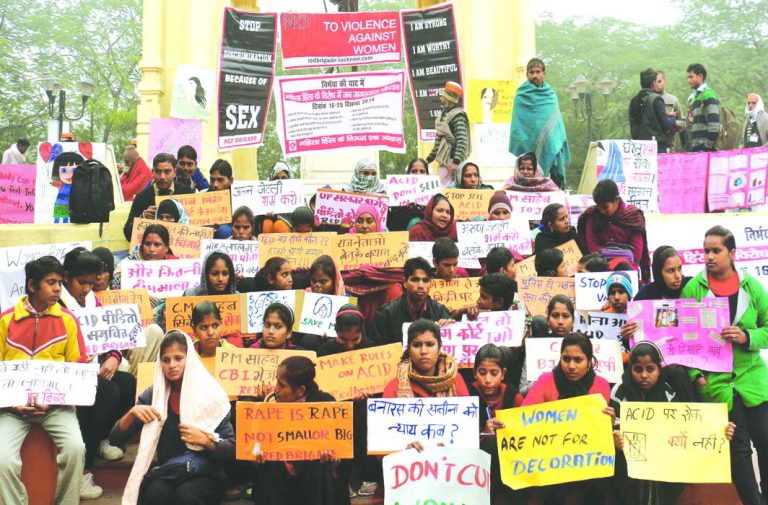 Two recent judgments came in for criticism as references were made to the character of the victims and the lack of a definite “no” from their side to give relief to the accused, thereby setting back progress made in jurisprudence in such cases

The Supreme Court in a plethora of cases in the 1990s, had ruled that the sole testimony of the raped survivor is sufficient to convict an accused. Thus, sexual history of the survivor which suggests that she might be promiscuous or lack of injuries on her body which could imply absence of resistance to rape, and therefore consent, were considered to be irrelevant. In many cases, delay in filing the First Information Report (FIR) was also condoned, as it was reasoned that a survivor would take time to recover from the trauma caused by rape, and would require the support of her family and friends to make a complaint to the police.

Section 155(4) of the Indian Evidence Act, for instance, was repealed by parliament because it enabled the defence to bring evidence of “general immoral character” of a rape survivor.

Judgments by high courts in two recent cases have, however, tended to ignore this remarkable progress in jurisprudence in coming to the aid of rape survivors. In Vikas Garg v State of Haryana, decided on September 13, the Punjab and Haryana High Court released three rape accused on bail after questioning the testimony of the survivor. The three accused were students of Jindal Global Law School, Sonepat, while the survivor was a student of the Management School of OP Jindal University.

A trial court had found all the three guilty of gang rape and sentenced two of them to 20 years, and one to seven years’ imprisonment. Two of them had completed a jail term of more than two years, while the third was about to complete two years in jail. Their appeals were pending before the High Court.

In the normal course, it is not open for appellate courts to examine evidence in order to determine whether the convicts deserved bail during the pendency of their appeals. But the High Court observed: “A perusal of the statement of the victim as also her cross-examination reveals a promiscuous relationship and sexual encounters with all the three accused persons over a period of time and at no stage, did she ever make any attempt to reveal her mental state to either the authorities in the college or to her parents or her friends.”

The High Court justified reproducing her statement and her cross-examination in extenso to gain and give an insight into the “immature but nefarious world of youngsters unable to comprehend the worth of a relationship based on respect and understanding”. The High Court concluded that the entire “crass sequence actually is reflective of a degenerative mindset of the youth breeding denigrating relationships mired in drugs, alcohol, casual sexual escapades and a promiscuous and voyeuristic world”.

The High Court then offered a bizarre justification for why the accused deserved to be released on bail. It said: “The testimony of the victim does offer an alternate story of casual relationship with her friends, acquaintances, adventurism and experimentation in sexual encounters and these factors would, therefore, offer compelling reasons to consider the prayer for suspension of sentence favourably particularly when the accused themselves are young and the narrative does not throw up gut wrenching violence, that normally precede or accompany such incidents.”

The High Court thus noted that one of the accused and the survivor exchanged their respective nude pictures, but ignored her testimony that she did so because she was coaxed by him. Again, her acceptance of a sex toy, as suggested by one of the accused, is cited as a factor suggesting that she too suffered from misadventure, stemming from a promiscuous attitude and a voyeuristic mind. However, her expression of unwillingness to buy the sex toy was ignored by the High Court.

The Court then concluded: “It would be a travesty if these young minds are confined to jail for an inordinate long period which would deprive them of their education, opportunity to redeem themselves and be a part of the society as normal beings. Long incarceration at this stage when the appeal is not likely to mature for some time is likely to result in an irreparable damage.”

Even as one wonders whether similar reasoning could be applied to other convicts found guilty of heinous offences like rape, the bench offered one more bizarre reasoning to justify bail: “We are also of the opinion that the pendency of the appeal, ironically may work as a guarantee to prevent a repeat resulting from the fear of incarceration in the event of failure of the appeal.” Can the appellate court offer similar reasoning to grant bail to convicts awaiting decision on their appeals?

The High Court’s order abounds in contradictions. Having granted them bail, it directed the All India Institute of Medical Sciences, Delhi, to depute a trained psychiatrist to counsel the accused, (whom it now called as victims), and report to the Court on whether they are free of their voyeuristic tendencies.

“The testimony of the victim does offer an alternate story of casual relationship with her friends, acquaintances, adventurism and experimentation in sexual encounters…”

The High Court asked the three convicts to share the amount of compensation of Rs 10 lakh to be offered to the survivor, equally, as if it could be a condition for grant of bail. That the Court did not hear the survivor or her family on the grant of bail to the accused is another anomaly which needs to be addressed if the bail is challenged.

The fact that the Court was ready to consider the plea of the accused to travel abroad for education makes one wonder if their class influenced the verdict.

In the second instance, the Delhi High Court acquitted Mahmood Farooqui, the well-known writer and co-director of the film, Peepli Live, for the rape of an American research scholar who had interacted with him during her stay in India.

The Special Fast Track Court, Saket, had found Farooqui guilty of rape in a detailed judgment last year and had sentenced him to rigorous imprisonment of seven years and a fine of Rs 50,000.

While acquitting Farooqui, the Court gave a bizarre interpretation of consent, and refusal. Consent, as defined under Section 375 of the Indian Penal Code, the High Court said, includes non-verbal and verbal communication. It interpreted the circumstances of the incident as indicating consent of the complainant for a sexual encounter with Farooqui.

Although the past sexual history of the prosecutrix with the accused cannot be a ground for denying the absence of consent during the incident in question, the High Court concluded as follows:

(b) The prosecutrix had been cracking jokes and indulged in playful banter immediately prior to the occurrence.

(c) During the act, the prosecutrix feigned orgasm.

(d)  Prior to the act, the appellant had asked her for sexual favours to which she did not stoutly resent or deny.

(e) The prosecutrix continued to remain in the company of the appellant.

(f) That the prosecutrix was under fear was absolutely unknown to the appellant.

(g) The conduct of the prosecutrix, post occurrence, namely her remaining in the house.

(h) The prosecutrix did not communicate about this occurrence to other acquaintances, even when there was an opportunity to do so.

The High Court further reasoned that her unwillingness was only in her own mind and heart, but she communicated something different to him.

“If that were not so, the prosecutrix would not have told the appellant that he had gone too far on that night. At what point of time, during the act, did she not give the consent for the same, thus, remains unknown, and it can safely be said that the appellant had no idea at all that the prosecutrix was unwilling,” the High Court explained.

It added that when there is an assumed consent, it matters not if one of the partners to the act is a bit hesitant.

Consent has to be an affirmative one in clear terms, the Court agreed subsequently. If this was so, why did it interpret a feeble hesitation as consent is not clear.

The High Court suggested that if the parties are known to each other, are persons of letters and intellectually/academically proficient, and if, in the past, there have been physical contact, it would be really difficult to decipher whether little or no resistance was actually a denial of consent.

“At what point of time, during the act, did she not give  the consent for the same, thus, remains unknown and it can safely be said that the appellant had no idea …”

In an act of passion, actuated by libido, there could be myriad circumstances which can surround consent and it may not necessarily always mean yes in case of yes or no in case of no, the Court explained.

The Court’s interpretation of her post-incident conduct is riddled with contradictions, as it later agreed it could be explained by her trauma.

Meanwhile, on a positive note, the Bombay High Court, while refusing bail to an accused, convicted and sentenced to 10 years’ rigorous imprisonment under the Protection of Children from Sexual Offences Act, has held that women of easy virtue have the right to refuse consent.

The Court refused to consider the fact that the accused was the sole earning member of his family, for suspending his sentence.

The first two verdicts have naturally come in for a lot of criticism as not only were they seen as “sexist” and setting back women’s rights, but they seemed to show how easily the judiciary was influenced by the class of the accused in granting relief to them.