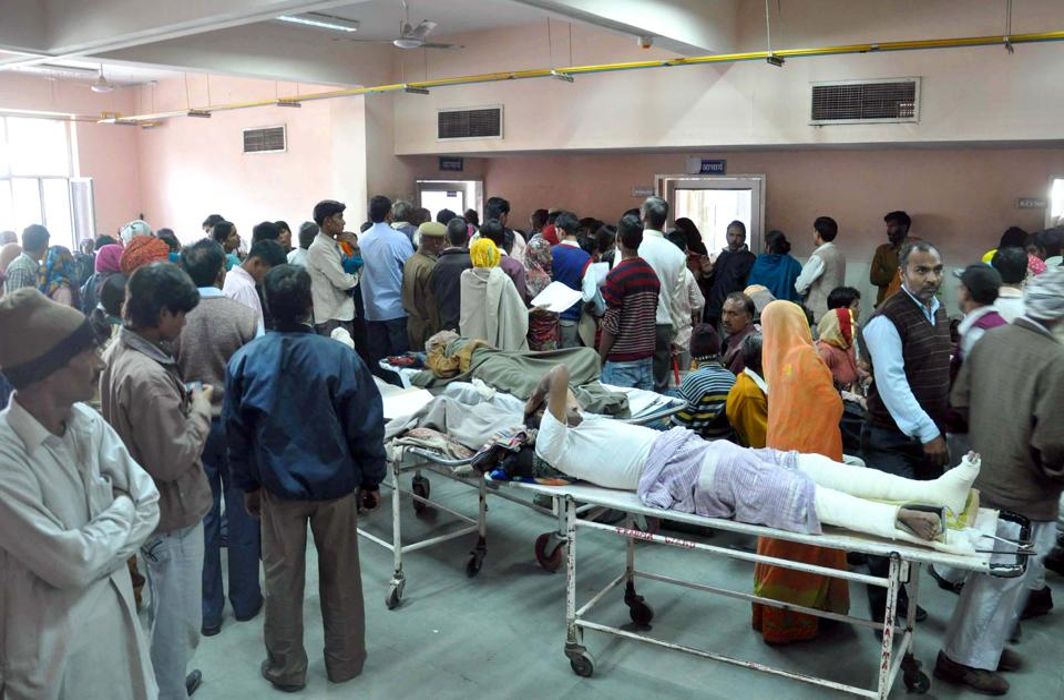 Above:  Acute shortage of doctors forces patients to wait for hours at government hospitals

In an attempt to revitalise this moribund sector, the Allahabad High Court has ordered that all government officials should avail of services from state-run hospitals, but this has not been received well

With successive governments in Uttar Pradesh failing to improve the quality of education in government-run primary schools, the Allahabad High Court in August 2015 directed the chief secretary to ensure that government officials, people’s representatives and members of the judiciary send their children to these schools.

On why the VIPs should send their children to government schools, Justice Sudhir Agarwal said: “Only then would they be serious enough to look into the requirements of these schools and ensure that they are run in good condition always.”

And in a similar judgment, the Court on March 9, 2018, gave directions on improving the ailing health sector of the state where primary health centres (PHCs) have generally failed to provide any medical assistance to people in distant villages.

Hope for improvement in the two crucial sectors flickered after the two orders but only for a brief while.

In the health sector, the Court directed the state government to ensure that all government officials and others who received salary or other financial gains from the public exchequer should avail of medical care services from hospitals run and maintained by the government. The Court also ordered that VIPs should not be given special treatment. “There shall be no special VIP treatment,” a division bench said.

The order was passed on a PIL filed by one Sneh Lata Singh, who alleged that the condition of government hospitals was indeed pathetic. Justices Sudhir Agarwal and Ajit Kumara said that if medical care was obtained from a private hospital, the government must not reimburse these expenses. This condition would not apply to diseases which can’t be treated at all in government hospitals.

The judges directed the government to take immediate steps to fill vacancies of medical, para medical and other attending staff in government hospitals. In its wide ranging order, the bench said that state medical colleges should be audited by the Comptroller and Auditor General of India. To crack down on private practice, it instructed the D-G, Vigilance, to form special teams to track down state medical officers engaged in private practice or running hospitals, nursing homes and to register FIRs against them.

The state government has been grappling with multiple challenges in the healthcare system and infrastructure. These pertain to lack of basic facilities, including medicines, at primary and community health centres, besides a perennial shortage of doctors.

With 77 percent of the state’s population living in villages, one PHC is estimated to cater to approximately 50,000 people. The 773 community health centres (CHCs) have two to five doctors. At the same time, in 200 district hospitals, most of which have some 100 beds, there are 10 to 75 doctors. That makes some of the district hospitals overstaffed, while the PHCs and CHCs are understaffed.

Yadav and the former health secretary both said that filling 50 percent of the existing vacancies in 45 days would not be possible for two reasons: one, there is a shortage of MBBS doctors and, two, qualified doctors, especially women, are not ready for rural postings due to the poor law and order situation and living conditions. Lack of basic amenities like water, electricity and good schools also discouraged medicos from joining the government’s workforce.

The part of the order which makes it mandatory for all officers, representatives of the people and members of the judiciary to avail of medical facilities only at government-run hospitals was described by the officer as a tussle between classes. VIPs get the best government doctors to attend to them at home, while other employees have to queue for long hours. The practice of VIP treatment will be difficult to stop given the state’s VIP culture, he said.

Although a welcome order, who would make a minister, MLA, IAS officer or judge wait? In 2006, Dr Sunil Pradhan of SGPGI, Lucknow, was issued a contempt notice for having made a sitting judge of the Allahabad High Court wait as he was attending to a patient in the OPD. He was made to tender a written apology.

The only redeeming feature is that in this year’s budget, the government allocated 5.5 percent of its total expenditure to the health sector. This is higher than the average expenditure of 18 other states. However, Yadav is not convinced about the government’s intent. He said the government was “impractical’’ about its objectives. “The present strength of 18,400 doctors is based on three-decade-old provisions. Posts of medical officers have not been created in recent years to match the unrealistic promises which the government has made,” Yadav said.

The High Court’s earlier directions on primary schools was significant as it said that “it will give an opportunity to children of common men to interact and mix with children of high and semi-high society, giving them a different kind of atmosphere, confidence and other opportunities”. However, some lawyers described the judgment as flawed and the government concurred with their view.

Children between five and 14 years, the school-going age, account for one quarter of the state’s 200 million people. This is said to be the largest in the country. Like government doctors, the number of primary teachers is woefully short in UP. Going by the yardstick set by the Right to Education, UP should have 8,40,000 teachers at the primary level to meet the 1:30 teacher-pupil ratio. Against this, the state has only 6,65,779 teachers and a student teacher ratio of 1:39, according to a study by Unified-District Information System for Education (U-DISE) Flash Statistics 2015-16.

The problem of shortage is compounded by the second highest teacher absenteeism in rural government schools—31 percent—in the country. Ironically, while the state’s expenditure on government schools has gone up substantially, learning levels continue to be low.

Despite these problems, the UP government decided to challenge the High Court’s order in the Supreme Court, arguing that it would go against the fundamental rights of parents “to decide where they wish to send their children” for studies. And in an attempt to window-dress, the government announced it would open English-medium primary schools.

In both the cases, the Court has done its bit. But the government has its own priorities. Providing good healthcare and quality education at the primary level seem to be low-priority areas.