The higher judiciary is poised for a salary upgrade that will bring it on a par with the bureaucracy, with the Chief Justice of India maintaining his slight edge

The wait is almost over. Since India became a republic, salaries of high court and Supreme Court judges have been raised only three times in 65 years. Poorer than their lawyer brethren, several of whom command Rs 10-20 lakh for a single appearance, the judges richly deserve a salary upgrade. In fact, their monthly earnings are so low that many advocates would rather practise than become judges. It is another matter that vacancies on the bench are many and case pendency figures are rising steadily.

The salaries of judges were roughly doubled in 1986, tripled in 1998 and tripled once again in 2009—with retrospective effect from 2006. This is even as news comes of the Seventh Pay Commission report being implemented for central government employees. Under it, bureaucrats earn close to triple the current salary drawn by judges.

However, judges may soon achieve pay parity with the bureaucracy once again. According to reports, in March, the government accepted the Supreme Court’s proposal for raising their remuneration by nearly 200 percent.

A three-judge committee had given its recommendations to the government a few months ago on salary hikes for judges. The panel, headed by former Chief Justice of India (CJI) TS Thakur, suggested the monthly salary of the Chief Justice of India be Rs 3 lakh, besides perks. The government has set a Rs 2.8 lakh per month package for the CJI, a little above the amount drawn by the cabinet secretary. For the top court judges, this has been pegged at Rs 2.5 lakh, allowances apart, as it has been for the high court chief justice. Other high court judges are set to draw a monthly package of Rs 2.25 lakh.

Though the pay hike of judges may take a while to materialise, it is learned that a cabinet note is underway and will soon see the approval of the Union cabinet.

The decision translates into a nearly three-fold jump in the judges’ emoluments. Today, the salary of a high court judge is Rs 80,000, while that of the high court chief justice and Supreme Court judges is Rs 90,000, a paltry amount compared to what the higher bureaucracy have been drawing post the implementation of the Justice AK Mathur-headed Seventh Pay Commission salary recommendations since January 16. CJI Thakur, himself, draws a monthly salary of Rs 1 lakh.

The Seventh Pay Commission has resulted in a near-15 percent hike in basic pay of central government employees, including the armed forces and the police force. For the cabinet secretary, the jump has been 160 percent. The salary for the post now stands upgraded at
Rs 2.5 lakh, a big leap from the current figure of Rs 90,000, and only a little less than the CJI’s proposed pay packet. The pay of the other secretaries, too, has been revised upwards from Rs 80,000 to Rs 2.25 lakh, in an increment that is coming after 11 years. The last was given when the Sixth Pay Commission was implemented in 2006.

Members of Parliament, meanwhile, draw a monthly salary of Rs 50,000 and an allowance of Rs 90,000. When the parliament is in session, they avail an additional daily allowance of
Rs 2,000. The President of India receives Rs 1.5 lakh per month. The Vice-President takes home Rs 1.25 lakh and governors around Rs 1.10 lakh. According to information availed under RTI, the prime minister draws a gross monthly salary of Rs 1.6 lakh.

This means that the cabinet secretary’s salary is now significantly higher than that of even the President. To correct this anomaly, the Home Ministry is planning to float a proposal and a Bill in the parliament. The President’s salary was last raised in 2008—from Rs 50,000 to the present amount.

Though the pay hike of judges may take a while to materialise, it is learned that a cabinet note is underway and will soon see the approval of the Union cabinet. Once the cabinet clears the proposal, the procedure requires the law minister to bring the judges’ salary amendment bill before parliament, and the rest will follow.

WHAT OF LOWER JUDICIARY?

The apex court has also formed a new judicial pay commission to examine the salary structure and allowances of members of the subordinate judiciary. The panel is headed by Justice PV Reddy and senior Supreme Court lawyer R Basant is a member. The order, dated March 8, was passed on a petition filed by the All India Judges Association by an apex court bench comprising Justices J Chelameswar and Abdul Nazeer. The report must be submitted within a period of 18 months. 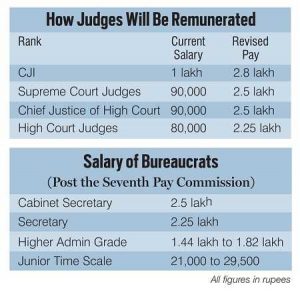 So how does the judicial fraternity feel about this bonanza coming their way? Former acting chief justice of Gauhati High Court K Sreedhar Rao said: “It is no bonanza in my view, but still welcome. Judges must remember that their work is a service rendered, so there must be that element of sacrifice. Where are the funds for the state to pay so much? To help the society, one has to forgo something. Judges must be satisfied with the salaries they are given.”

He also felt that the entire salary structure of the government staff should be revisited. “There is need to ensure pay parity between the overpaid clerical staff in the bureaucracy and those in the private sector. There are crores struggling to make ends meet. Some attention must also be devoted in that direction by the government.”