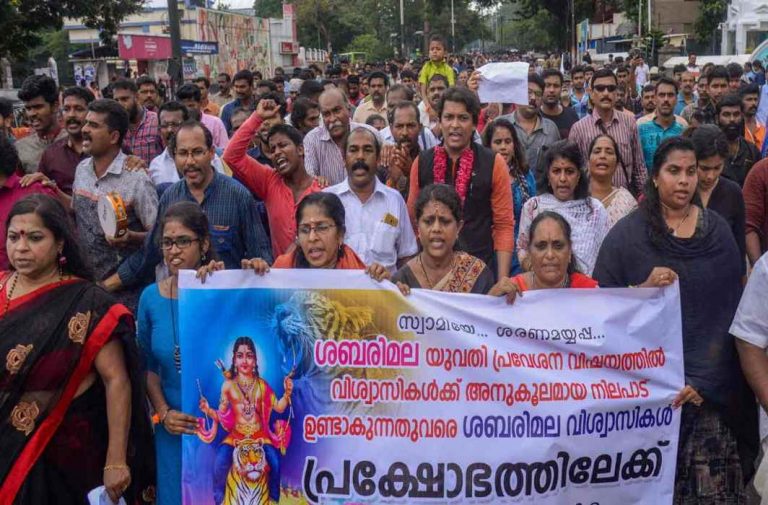 Amid widespread protests, including those by women groups, against the Supreme Court’s historic verdict of last week that allowed women to enter the iconic Sabarimala Temple, the Kerala government, on Wednesday (October 3), said it will not file a review petition against the top court’s order.

The Kerala government and the state-controlled Travancore Devaswam Board which runs over 700 temples in the state including the Sabarimala Temple have been at odds on the matter with the former supporting the SC order and the latter opposing it.

In the past too, different ruling dispensations had take divergent stances on the issue on abolishing the patriarchal tradition of baning women from entering the temple dedicated to Lord Ayyappa. Yesterday, thousands of people including women, took out protest marches against the SC order, giving rise to speculation that the Kerala government would take a second look at the matter.

Women police personnel from Kerala and neighboring states will be deputed to ensure law and order. Women who want to go to Sabarimala cannot be stopped: Kerala CM Pinarayi Vijayan (file pic) pic.twitter.com/3aqkIBxzSa

However, Pinarayi Vijayan, the Marxist chief minister of Kerala, said on Wednesday that the State has no plans to file a review petition. Speaking to the media in Trivandrum after the weekly cabinet meeting, the Chief Minister said that the government is bound to make arrangements for women who wish to enter the shrine.

“Since the SC pronounced the verdict, it is the existing law. The government will not file a review petition against it. From this pilgrimage season, arrangements will be made for the women who are willing to go to the temple,” he said. When asked about the protests against the ongoing verdict in the state, the CM said that there are people who have also welcomed the verdict. He added that the statement made by the Devaswam Board president A Padmakumar should not be misunderstood as the government’s stand.

On September 24, a five-judge bench of the Supreme Court judgment headed by then Chief Justice Dipak Misra had lifted the ban on women between the ages of 10 and 50 years from entering Sabarimala. The bench, in a 4:1 majority judgment, observed that under Article 25, both men and women have the freedom to practice religion and that the burden of the deity’s celibacy cannot lie solely on women