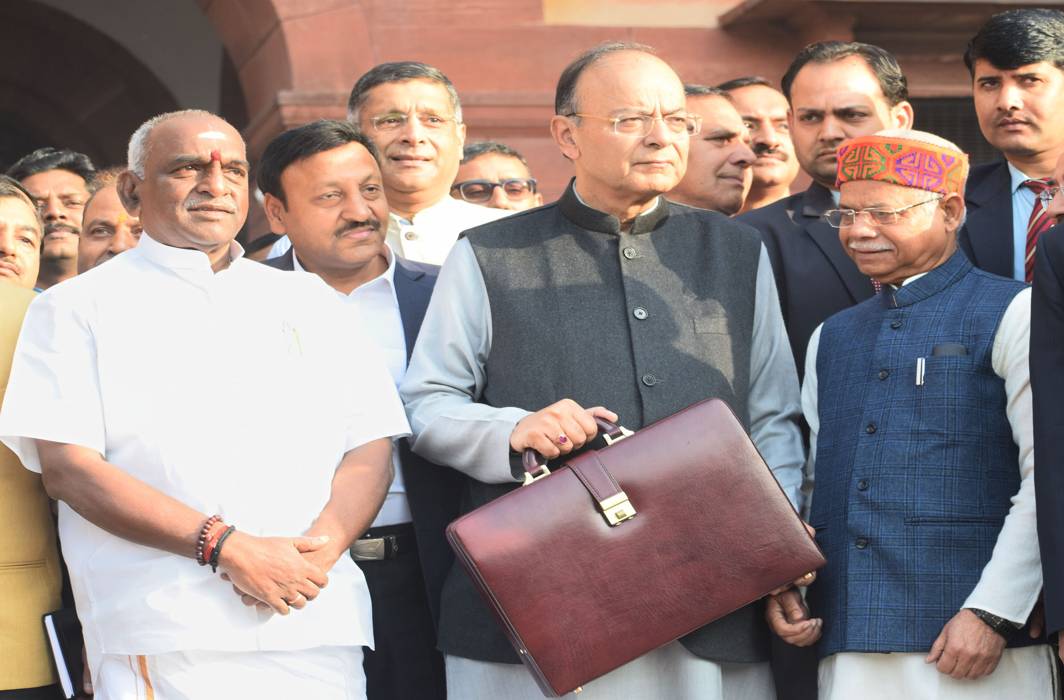 With the political grapevine abuzz with speculation that Prime Minister Narendra Modi could recommend advancing of the general elections scheduled for May 2019 to later this year, finance minister Arun Jaitley presented the incumbent NDA government’s last Union Budget on Thursday (February 1).

Here are the highlights:

Finance Minister Arun Jaitley says the average GDP growth rate for three years of the NDA government has been 7.5 per cent. GDP growth for current fiscal at 6.3 per cent while Jaitley says the economy will grow at 7.2 to 7.5 per cent in the second half of the next fiscal. Country firmly on course to achieve over 8 per cent growth as manufacturing, services and exports back on good growth path, said the finance minister.

With the government doing away with the tradition of presenting a separate Railway Budget since the last financial year, the Union finance minister also made budgetary allocations for the Indian Railways in his budget speech. Railway Capex for FY19 has been pegged at Rs 1.48 lakh crore; a 13 per cent increase from the FY18 estimate of Rs 1.31 lakh crore.

Key announcements regarding the railways included:

The Finance Minister Arun Jaitley said that the government is aiming to expand airport capacity by 5 times to handle 1 billion trips a year with an allocation of Rs 60 crore being made towards new airport expansion projects. Government aims to bring 56 unserved airports and 31 unserved helipads under the regional air connectivity scheme – Ude Desh ka Aam Nagrik (UDAN).

With Prime Minister Narendra Modi recently acknowledging his government’s failure in suitably tackling and containing farmer unrest, the biggest chunk of positive announcements and allocations were reserved for the agriculture sector. This is largely on expected lines since the Modi government faces its stiffest electoral challenge from the vast majority of the country that is dependent on the agricultural economy in one way or the other.

Contrary to expectations, the finance minister made no changes in the personal income tax slabs. However, a slew of cosmetic measures have been announced as part of the tax proposals proposed in the budget. These are:

A slew of measures have also been announced for Senior Citizens. These are:

Under Ujjwala Scheme, free LPG connections to be given to 8 crore poor women instead of the previous year’s target of 5 crore women

Estimated budgetary expenditure on health, education and social protection for 2018-19 pegged at Rs.1.38 lakh crore against estimated expenditure of Rs.1.22 lakh crore in 2017-18.

Finance Minister announces setting up of Ekalavya Model Residential School on par with Navodaya Vidyalayas to provide quality education to tribal children by 2022 in every block with more than 50 per cent Scheduled Tribes population and at least 20,000 tribal persons

In a bid to increase investments in research and related infrastructure in premier educational institutions, including health institutions, new program titled Revitalising Infrastructure and Systems in Education (RISE) announced with a total investment of Rs.1,00,000 crore to be made over the next four years.

Allocation on National Social Assistance Programme this year has been kept at Rs. 9975 crore

– Allocate an additional Rs.600 crore for providing nutritional support to all TB patients at the rate of Rs.500 per month

A sum of Rs. 3794 crore has been provided for giving credit support, capital and interest subsidy and for innovations

Target of Rs.3 lakh crore for lending under MUDRA Yojana in FY19

Government will contribute 12 per cent of the wages of the new employees in the EPF for all the sectors for next three years. Amendments to be made in the Employees Provident Fund and Miscellaneous Provisions Act, 1952 to reduce women employees’ contribution to 8 per cent for first three years of their employment against existing rate of 12 per cent with no change in employers’ contribution

The Fuinance Minister announced an increase of budgetary allocation in the infrastructure sector for 2018-19 to Rs.5.97 lakh crore against estimated expenditure of Rs.4.94 lakh crore in 2017-18.

Under the Bharatmala Pariyojana, about 35000 kms road construction in Phase-I at an estimated cost of Rs.5,35,000 crore has been approved

Budget proposes to revise emoluments to Rs.5 lakh for the President, Rs 4 lakhs for the Vice President and Rs.3.5 lakh per month to Governors of respective States.

Emoluments paid to the Members of Parliament to be revised with effect from April 1, 2018 and then a law will also provide for automatic revision of emoluments every five years indexed to inflation