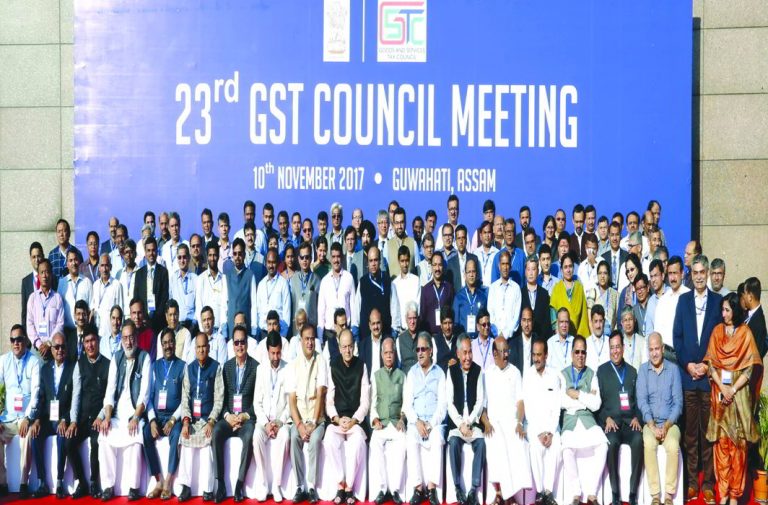 Above: (Left) Finance Minister Arun Jaitley (10th in first row from left) in a group photo during the 23rd GST Council meeting at Guwahati. Photo: PIB

The furore over this tax regime led the GST Council to make timely changes which will mitigate the problems of many businesses. More relief is in the offing

GST is now about four-and-a-half months old. Since its introduction on July 1, it has undergone many course corrections through monthly GST Council decisions. This shows that when GST was implemented, apart from IT glitches, there were many policy glitches too. More important, the government, particularly the GST Council, was ready to acknowledge the policy lapses and undertake the necessary changes. Major course corrections started with the decisions of the September meeting of the Council, by which time small businesses were badly hit and a sizeable section of them had to close down.

Internationally, GST authorities do not tax small businesses for three main reasons. Taxing them is not cost-effective from the point of view of revenue collection vis-a-vis the cost of collection. Second, being small and unorganised, they do not maintain proper records and hence, administering them is cumbersome. Third, taxing them breeds corruption. Therefore, most countries administering GST keep the threshold exemption limit in the range of Rs 80 lakh to Rs 1 crore of annual turnover. In India, the threshold has been kept at Rs 20 lakh, leaving only a very minute section of small business outside the ambit of GST.

As if that was not enough, two separate pieces of legislation broke the back of small business. If a small business below the threshold made inter-state supplies, it would lose the exemption benefit and would have to get registered and pay GST. This forced many to stop inter-state supplies and thus, their businesses shrank. Second, Reverse Charge Mechanism, which facilitates collection of tax from the recipient of goods and services instead of the normal practice of collection from the supplier, was applied in the case of supply by the small business below the threshold. Therefore, the registered recipients were called upon to pay GST and undertake necessary compliance requirements on behalf of the unregistered suppliers. This prompted the registered recipients to stop doing business with the unregistered small businesses. This also resulted in further shrinking and finally closure of many small businesses.

Seeing the furore caused by GST, the Council took some corrective actions. First, the clause relating to withdrawal of exemption in the case of inter-state supply of goods and services was suspended. Also, the clause relating to Reverse Charge Mechanism was kept in abeyance. These decisions provided  much-needed relief to small business.

Relief was also provided by expanding the scope of the Composition Scheme. In the last GST meeting on November 10, it was decided to raise the upper limit for availing of the Composition Scheme to Rs 1.5 crore of annual turnover. It may be recalled that a tax-payer who opted for this scheme had to pay GST with a single rate on the total value of his supplies. He had to file only one annual return instead of multiple ones. However, he would not be entitled to credit. The composition rate has been fixed at 1 percent for both traders and manufacturers. Among services, only restaurants have been brought within the Composition Scheme.

The export sector was also hit hard with the introduction of GST inasmuch as exporters were asked to pay first and then claim refund. Besides, certain export promotion schemes were made inapplicable for payment of GST. These measures created a huge problem in terms of blocking the working capital of exporters. In the last two meetings, relief was provided to them by simplifying and expediting the refund processes, extending Advance Authorisation, Export Promotion Capital Goods (EPCG) schemes and so on. Further, as a long-term solution, a decision was taken to create an e-wallet account facility by April 1, 2018. The e-wallet will be credited with a notional amount as if it was an advance refund. Further, exporters were exempted from having to furnish bond and bank guarantees at the time of clearing the goods for export.

The compliance procedure has also been simplified and the burden eased for tax-payers. Filing of GSTR-3B, a summary input-output return, has been extended till March 31, 2018. While taxpayers above the threshold of Rs 1.5 crore will file this return monthly, those below will file it quarterly. Efforts are on to simplify the formats of GSTR-1 and GSTR-2, the returns for output supplies and inputs, respectively. Late fees for delayed filing of returns have been waived till September, and for subsequent months, they have been drastically reduced.

Now, the GST rates. There was a lot of criticism over keeping more than 250 items in the tax slab of 28 percent. Originally, it was conceived that the highest slab of 28 percent would be for demerit goods like cigarettes and tobacco, diesel cars (due to environment damage), aerated waters (health hazards) and luxury items. But the tariff structure brought out on July 1 included many engineering and technology items, as well as consumer and white goods.

The biggest GST slab cuts came at the GST Council meeting on November 10:

A look at the list of items makes one thing clear—initially putting so many items of common use in 28 percent and 18 percent slabs was irrational and caused immense hardship to various strata of people. This could have been avoided.

Besides the IT glitches, this irrational tax structure coupled with policy glitches relating to small business were responsible for giving a bad name to GST in its initial months of implementation. However, it goes to the credit of the Council that it realised the mistakes and took immediate corrective measures. As indicated by some members of the Council, more corrective measures are expected in the next few meetings. For example, the bringing of stamp duty and land registration fees relating to real estate, petroleum and its products, and the like within the ambit of GST and withdrawal of some more items like cement and paint from the 28 percent slab are likely to be taken up in the next few meetings.

It has been said in some quarters that the coming Gujarat elections have necessitated these rational and logical measures. Whatever the case, a majority of the deficiencies of the initial months of implementation have been corrected and similar work will go on. Implementation of GST has to be looked at as “work in progress” and course corrections must be done wherever the taxpayers or taxmen point out the deficiencies. This process will ultimately improve and elevate GST.

—The author is former chairman, CBEC and author of the book
Know Your GST-GST Unravelled