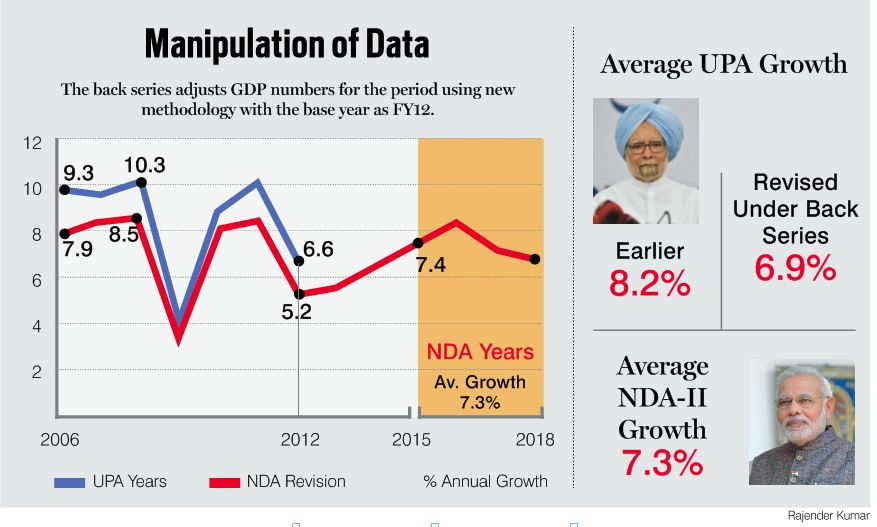 Consumption, investment, government spending and exports were all higher under the Manmohan Singh government than under Modi. Yet, somehow, revisions of past GDP numbers claim a better economic record under Modi. Fact or fudging?

There are two kinds of statistics: the kind you look up and the one you make up. The recent revision of past GDP numbers by the Modi government is a case of the latter. Quibbling about the past to make the present look good, acting as the saviour by questioning the achievements of past leaders and running roughshod over the independence of institutions has now become the hallmark of the Modi government. And since meaningful economic reforms and development have been elusive (despite the advantage of being the first government to have a majority in 30 years), State power has now been used to manipulate economic growth numbers.

The NITI Aayog (which really has no expertise in calculating GDP) recently announced that it had recalculated GDP numbers going back to 2005. And surprise, surprise. Not only did they revise the GDP growth under the present government upwards, but also revised downwards the growth under the previous government. This shouldn’t come as a surprise as this government has a fetish for defining its achievement on a comparative basis. Remember all the chest-thumping about how the Indian economy was growing faster than the Chinese economy? When Raghuram Rajan, the former RBI governor, dared to remind everyone that India’s relative performance was immaterial and that the focus should instead be on real reform to get the country to double-digit growth, he was unceremoniously let go.

The latest revision of past GDP numbers, right before a major election, to show illusory “development” was, therefore, to be expected. How else would you wipe out memories of the most disastrous State-imposed economic policy in Indian history—demonetisation? The re­calculation of GDP has lowered the average annual growth rate for the years 2005 to 2012, from 8.2 percent per year to 6.9 percent to make the UPA government look bad, and raised the average growth rate of the Modi years to 7.3 percent. And since no one but the government has access to the underlying data used to calculate the GDP, what better way to show growth than by juggling these numbers—no one would have the ability to cross-check these revisions.

But while statistics may be pliable, facts are stubborn things. Anyone living in India during the 2005 to 2012 period will tell you that those were times of unprecedented growth. A lot of new wealth was created, and there was a significant reduction in poverty as a result of a genuine increase in income (not from new welfare schemes). The real estate sector was booming, a communication revolution was taking hold, bank lending was growing at 20 percent and exports at 14 percent annually, corporations were making record profits, the stock market was booming and the dollar bought only Rs 44.

It doesn’t feel like that today. Farmers are protesting, small shopkeepers are hurting, banks are not lending because they face loan defaults at an increasing rate, the real estate sector is floundering, unemployment is increasing and the rupee keeps falling. The government keeps touting India as the world’s fastest-growing economy, yet there seems to be no corresponding increase in prosperity. The government claims that the economy has grown at an average 7.3 percent a year over the last four years which translates to a 40 percent increase in wealth over this period. But who is prospering from this?

In its simplest terms, the GDP of a country is the sum of the money spent by consumers, businesses and the government to buy goods and services produced by it.

To this is added goods and services that are exported minus the country’s imports. Thus, a country’s GDP is the sum of consumer spending (C), business investment (I), government spending (G), exports (X) minus imports (M). This produces the mathematical equation: GDP = C + I + G + X – M.

It is important to understand that this is a mathematical identity and, therefore, holds irrespective of whether GDP is calculated using factor or market prices and is invariant to the base year used to calculate it. We can thus use this to compare the economic growth under the two governments.

Common sense tells us that it is improbable that personal consumption (C) was higher during the Modi years because we know that demonetisation destroyed people’s ability to buy goods and services. There is no arguing the fact that the body doesn’t get healthier if 84 percent of the blood is removed from it. The data confirms that. Personal consumption (C) during the 40 quarters of the Manmohan Singh government grew at an average quarterly rate of 3.2 percent. In contrast, in the 13 quarters of the Modi government, the average quarterly growth in personal consumption is only 2.6 percent.

We know from economic theory and the empirical evidence that higher levels of investment lead to higher GDP. Investment (I) as a percent of GDP was significantly higher during the two UPA terms. It averaged 34.5 percent from 2004 to 2014 peaking at 41.1 percent in 2011. In comparison, investment has been declining during the Modi years, averaging 30.8 percent and declining to its lowest level of 29.8 in 2017. 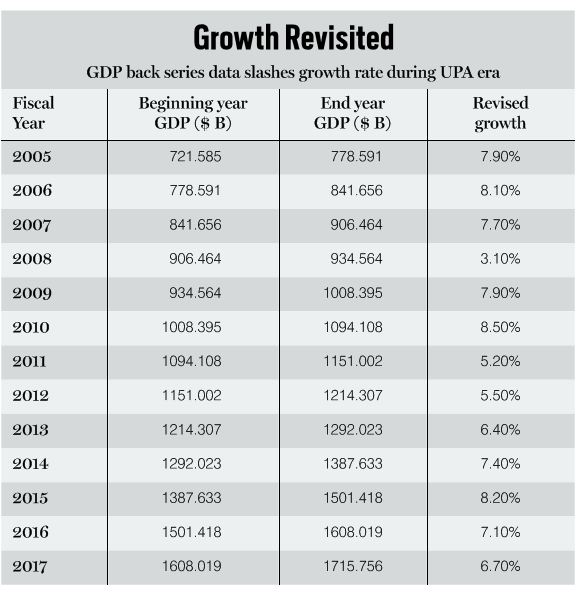 What about exports and imports? Higher exports (and lower imports) lead to higher economic GDP. How do the two governments compare on trade? Despite a weaker rupee (which should increase exports), exports have dropped since Modi came to power. In October 2018, India’s exports were $26.98 billion—13 percent lower than when Modi came to power in 2014. In contrast, over the 10 years of the two UPA administrations, India’s exports grew at an average annual rate of 14 percent. According to the IMF Outlook Report for 2018, India’s exports-to-GDP ratio is 11.4 percent and this is the lowest since 2005.

India’s export slowdown is particularly alarming during the Modi years because it comes at a time when overall world trade has grown at the fastest pace in 10 years. India has failed to take advantage of the surge in world trade. An indicator of an economy’s participation in global trade is trade openness which is measured by the sum of exports plus imports as a percent of GDP. In 2012, India’s openness to trade was at 43 percent. By 2017, this number had dropped to 27.4 percent. Clearly, something is amiss. All of Modi’s global hobnobbing and bear hugs have not resulted in greater trade opportunities for the country.

The combination of slowing exports and increasing imports has pushed the trade deficit from $137 billion in 2013 to $162 billion in 2017-18.

So, while we don’t have access to the detailed data required to calculate GDP, we do know that each of the five components that make up a county’s GDP was worse in the Modi years than during the Singh government. Yet, their sum is much higher, according to NITI Aayog.  Are we supposed to believe that despite lower levels of consumption, investment, government spending and exports, somehow mysteriously GDP was higher under Modi than Singh? Or that the 20-25 percent growth in corporate earnings under the Singh administration compared to a mere 4 percent over 2014-18 was just statistical noise? Has economic theory been wrong for the last four decades or are we being fed a load of bull?

This government’s obsession with simple constructs like GDP growth without understanding the complexities of measuring economic progress has been damaging to India’s growth because it shifts attention away from real reform to gaming the system. The GDP of any country is a fuzzy and imprecise measure of the economic well-being of its citizens; so, precious little will be gained by trying to game that data.

Let’s, instead, come to grips with reality. India is a long way from being considered prosperous. Let’s not detract from focusing on the hard work required to improve the quality of life in the country. Let’s not move our attention away from the goals of “minimum government”, economic freedom, free markets, protecting individual rights, equal justice for all and increased personal responsibility. And let’s not fudge data and demean the efforts of the real contributors to economic growth—the millions of Indians who get up every morning and go to work to produce the goods and services that create the GDP.

The saddest thing of all is that India now joins the ranks of countries whose official data will not be trusted by global investors. The World Bank puts India’s 2018 GDP at $2.63 trillion. But recalculating from 2005 using the new GDP growth numbers puts India’s GDP at $1.715 trillion, a reduction of $905 billion. This drops India’s ranking from the 7th largest economy to the 12th largest, all thanks to the Modi government.

Talk about cutting your nose to spite your face.