Above: Finance Minister Nirmala Sitharaman on the way to present her maiden budget/Above: UNI

The FM’s announcement that the budget deficit would be financed from international markets has created a furore as it is risky. Instead, the government should focus on getting foreign financing into the country

In the 2019 budget, the finance minister announced that the government would increase its borrowing in the international market. This was being done to avoid the “crowding out” effect—a phenomenon where the government borrows money that could otherwise have been borrowed (and used more productively) by the private sector. The ubiquitous Pareto principle, also called the 80/20 rule, drives India’s savings and investment—80 percent of the nation’s savings are used by the government and invested in activities that produce only 20 percent of the economic growth, while the private sector produces 80 percent of India’s GDP from only 20 percent of savings.

The government is proposing to raise $10 billion in sovereign debt from foreign markets and about $14.5 billion in credit for millions of its small firms thr­ough foreign lenders like Germany’s state-owned development bank KfW Group, the World Bank and some Cana­dian institutions. These lenders want the government to guarantee these loans since many of these small firms lack proper financial information which makes it difficult to assess their credit risks. If the companies cannot pay back their foreign exchange denominated debt, the government would be on the hook for its repayment.

The government’s decision to borrow in international markets has created a furore, especially among ex-RBI governors who have unanimously condemned the idea. Their main apprehension is the increased risk associated with foreign currency borrowing. These concerns are legitimate and they have history to back them up.

The 1997 Asian economic crisis, which devastated many East and Southeast Asian countries, was not caused by weak fundamentals. Like India, the East Asian countries had strong macroeconomic fundamentals—good fiscal discipline, low inflation, high savings rates, rapid growth, high reserves, and, in several cases, modest current account deficits. The source of their problem was their external debt—in particular too much foreign currency debt relative to domestic currency debt, and too much short-term relative to long-term debt. Also, the structure of financial claims involved too much debt (borrowing) relative to equity (FDI investment). The Latin American debt crisis of the 1980s was also the result of governments running large fiscal deficits and financing them by sovereign borrowing in international capital markets. (The PMO has asked the finance ministry to relook at the Sovereign Bond Plan). 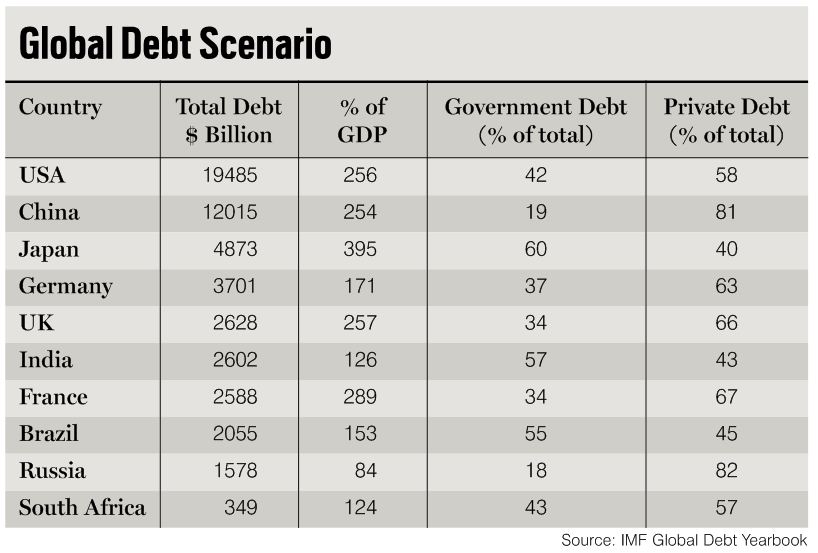 Most governments spend more than they collect in revenue, and this deficit is funded by borrowing from capital markets. As governments the world over get bigger and their reach increases, their debt has also increased. In 2018, the debt of all governments globally was $66 trillion, which is roughly 80 percent of global GDP. Twenty years ago, it was half—around 40 percent of global GDP. Politicians have learnt to ingratiate themselves to voters by providing increasing amounts of subsidies and welfare support. As money does not grow on trees, the government ends up borrowing it and sucking up savings that would otherwise have been employed to produce goods and services and increasing the economic welfare of the nation.

The table above shows the total debt for select countries. Countries are awash in debt. The IMF Global Debt database shows that in 2017, global debt (both public and private) reached an all-time high of $184 trillion in nominal terms, the equivalent of 225 percent of global GDP. Ironically, the most indebted economies in the world are also the richer ones. Advanced economies have an average debt of 266 percent of GDP, while the average for emerging economies (which include India and China) is 168 percent of GDP and 77 percent of GDP for the low-income countries. India’s total debt is around $2,602 billion, which is 126 percent of its GDP. Japan’s debt is the highest in the world at a whopping 395 percent of its GDP.

But how can a country like Japan sustain debt levels which are consistently above 200 percent of the GDP, while in 2015, Ukraine defaulted when its debt was merely 30 percent of the GDP? While the size of the debt matters, the ability to make the payments is even more important. Most of Japan’s debt is internal, held by its citizens, whereas Ukraine’s debt was owed mostly to foreign creditors. 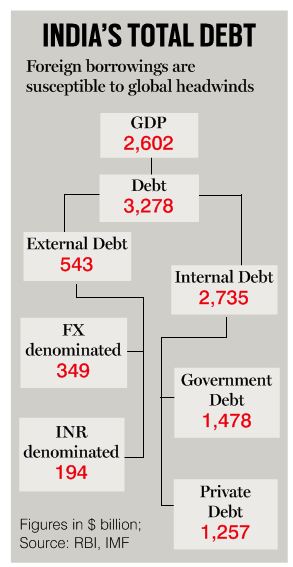 A country’s debt profile has two dimensions, the magnitude of the debt and its composition. India’s debt at 126 percent of its GDP is high but within the range for emerging economies. While private debt is larger than public debt for most countries, a majority of India’s debt, 57 percent, is debt incurred by the government.

The second issue is the composition of this debt. There are two kinds of debt, internal debt, which is money owed to the citizens of the country, and external debt which is owed to foreigners. External debt is rupee denominated if foreign investors buy bonds in India or the government and Indian companies issue bonds overseas that are denominated in rupees (Masala bonds, for example, are rupee-denominated bonds issued by Indian companies). The servicing of this debt is done in Indian rupees, so the investor bears the currency risk. But if the external debt is denominated in a foreign currency, the risk associated with currency fluctuations is borne by the issuer.

According to the Interest Rate Parity (IRP) theory, any difference in interest rates between two countries should be offset by a change in the relative exchange rate between their currencies. In efficiently functioning global capital markets, if IRP did not hold, smart investors would borrow money in the country with the lower interest rate and lend it in the country with the higher rate and make a riskless profit—in effect they would have a money machine. This is called the “carry trade” and is the bread-and-butter trade for global hedge funds. This trading ensures that interest rates are generally at parity after adjusting for currency risks.

So, while there may be a perceived advantage in cheaper foreign borrowing for India, this benefit will be modest, at best. IRP would ensure that a corresponding depreciation of the rupee will offset differentials in borrowing costs. Since 1991, the annual depreciation in the Indian rupee has been around 4.5 percent. The real cost of external debt will include this expected rupee depreciation and may, in the long-run, make foreign borrowing more expensive. Eventually, the macroeconomic risks of foreign indebtedness will likely outweigh any short-term benefits.

The chart on the right shows a breakdown of India’s total debt. In March 2019, it was $3.278 trillion, which is 126 percent of the country’s GDP. About 16.5 percent of this debt, or $543 billion, is external debt consisting of borrowings by the government and Indian companies from citizens of other countries and NRI deposits. The remaining 83.5 percent is internal debt. Of the external debt, $349 billion (or about 11 percent of the total debt) is denominated in foreign currencies. US dollar-denominated debt is the largest component of India’s external debt with a share of 50.5 percent at end-March 2019, followed by the rupee (35.7 percent), Japanese yen (five percent), SDR (4.9 percent) and euro (three percent).

Is India’s external debt large enough to pose a macroeconomic risk? The answer, of course, varies by the size of the country: a debt that would be too big for Nepal would be very modest for India. The traditional measures of the “size” of a country are GDP and exports. The former measures the ability to service debt in the long run, and the latter measures resources potentially available for debt service in the short run. Economists believe that external debt should not exceed 40 percent of GDP or 200 percent of exports and that the debt service ratio (the ratio of debt service to exports) should not exceed 25 percent.

What about the composition of India’s external debt? As of March 2019, short-term debt payments, which includes long-term debt falling due over the next 12 months and short-term debt by original maturity, constituted 43.4 percent of total external debt and would use up 57 percent of foreign exchange reserves. Of concern also is the debt to equity ratio of India’s foreign financing. Equity investment in the form of FDI would be preferred over debt borrowing as it is not hot money and does not create macroeconomic risks. In 2017-18, FDI flow into India was a measly $ 38 billion, compared to the debt component of $ 543 billion—which puts the debt-equity ratio at around 14.2. That is alarming. So, while the magnitude of India’s external debt is at acceptable levels and the country can take on additional foreign debt, the structure of its foreign financing is of concern. The country has too much debt relative to equity, too much short-term debt relative to long-term, and too much foreign exchange denominated debt compared to domestic currency debt. The government would be better off developing policy initiatives to improve FDI inflow and to increase foreign investment in domestically issued government securities. Removing FDI limits on all industries, especially banking, and increasing the amount foreign investors can own of government securities would be an excellent first step. Removing all capital controls on the movement of capital in and out of the country to reduce the risk of investing in India would also go a long way in improving the structure of India’s external financing.

The Indian government does not have to go overseas for foreign financing—it should focus on getting foreign financing into the country by reducing burdensome regulations, improving the quality and independence of its financial institutions and providing a tax regime that encourages foreign investment. 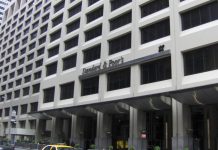