People are going through the pain of Modi’s demonetisation move in the belief that black money will be curbed. The acid test will be the results of the assembly polls

While Prime Minister Narendra Modi’s demonetisation move is perhaps the boldest decision of his government, it seems like a gamble. There are various angles to this—political, social, economic and class. Modi has said: “If you find anything wrong with my intentions or actions, hang me in public. I promise you I will give you the India which you desired. If someone faces a problem, I also feel the pain. I understand their problem but this is only for 50 days.”

The demonetization move was meant to eradicate black money, counter tax evasion, stop funding to terror groups and destroy counterfeit currency. During his 2014 campaign, Modi had promised to bring back black money stashed away abroad but nothing was achieved in this regard. Now he has decided to tackle black money at home. India’s GDP is $2,000 billion (Rs 125 lakh crore) and the parallel economy is estimated to be 23 percent of GDP. Compared to most economies where cash is five percent, in India, it is 12 to 14 percent of the GDP.

But even after 50 days, the cash crunch continues, much to the delight of the opposition. Modi had hoped to gain politically from “demonetisation”. Instead, consumer sales have dropped by one-third, farmers are stuck with perishable commodities and workers have been affected badly. Even small businessmen, traders and the real estate have been hit as almost one-third of their working capital came from black economy.

While the economic impact is yet to be assessed, (it will take a few months to collate information), its political impact is immediate. Modi has gained personally as the demonetisation move has projected him as a decisive and strong leader, especially as it came soon after the surgical strike against Pakistan. 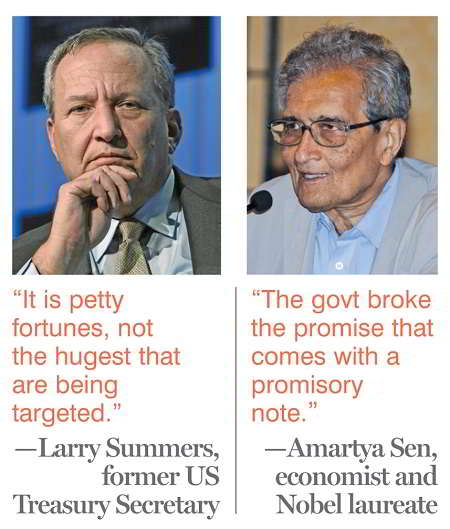 Though the BJP had been chest-thumping about the long-term impact of the move, party insiders fear its impact in the poll-bound states of UP and Punjab where the immediate pain felt by the common man would adversely affect the BJP’s chances.

Demonetisation is a strong issue for the opposition to corner the government. But will it be able to capitalise on its attack? Congress’s Rahul Gandhi, Trinamool’s Mamata Banerjee and AAP’s Arvind Kejriwal have been vying with each other to grab credit for championing the cause of the common man inside and outside parliament.

The united opposition stalled the entire winter session of parliament on demonetisation. Besides bringing up the sufferings of the common man at rallies and meetings, they have made it a poll issue in UP, Uttarakhand, Goa, Manipur and Punjab and see it as a referendum for Modi’s performance. Besides this, demonetisation has also hit the funding of various parties. About 70 percent of the funding of political parties comes from unaccounted sources. Scrapping the Rs 500 and Rs 1,000 notes would affect their campaign style.

While initially most parties welcomed demonetisation because they did not want to be seen as opposing a step to wipe out black money, as the lines in front of banks and ATMs became longer, they were emboldened enough to take on the Modi government. Mamata was the first to tweet: “The PM could not get back the promised black money from abroad from the rich so a drama to divert his failure.”

Congress vice-president Rahul Gandhi tweeted: “Once again Mr Modi shows how little he cares about ordinary people of this country—farmers, small shop-keepers, housewives—all thrown into utter chaos.” Both leaders mobilised support from the SP, BSP, DMK, NCP, JD (U), JMM, Shiv Sena and other political parties. The Left parties even staged a loosely-organised bandh. The JD(U) and the BJD adopted a wait-and-watch attitude.

On the social side, Modi wants to use demonetisation to broaden his voter base and attempt social re-engineering. Once known as the Brahmin-Bania party, the BJP today has more representation among Other Backward Castes (OBCs) and other sections. One out of three in Modi’s cabinet is an OBC and four BJP state units saw their Brahmin presidents replaced this year.

Modi now wants the poor to be his voter base. With big business and the super rich on his side, he does not need funds from his core supporters—traders and small businessmen. As the number of poor far surpasses this constituency, he is thrilled that they support him despite hardships. The poor are happy seeing the rich being hit or so he hopes and believes.

The sops that he announced at the end of the 50-day period in his televised address show that he wants to play Robin Hood—rob the rich to benefit the poor. The many welfare schemes targeting farmers, women, senior citizens and small businessmen are aimed in that direction.

Economically, it is clear that demonetisation was more a reform measure than a currency stabilisation measure. But the implementation had been poor with the RBI not having enough new currency notes and ATMs not being recalibrated fast enough to dispense new notes. Also, India is not yet ready for a cashless economy. Only five percent of Indians pay income tax and just 15 percent of the economy is inside the tax net. On top of that, the narrative has changed from black money to a cashless economy.

The reactions from economists have been swift. Larry Summers, former US Treasury Secretary, said in a blog: “We strongly suspect that those with the largest amount of ill-gotten gain do not hold their wealth in cash but instead have long since converted it into foreign exchange, gold, bitcoin or some other store of value. So it is petty fortunes, not the hugest and most problematic ones that are being targeted.” Nobel Laureate Amartya Sen said in an interview: “The demonetisation of currency was a despotic act as the government broke the promise of compensation that comes with a promissory note.”

Leading the pack of critics was former Prime Minister Dr Manmohan Singh who said: “In my opinion, the way the scheme has been implemented will hurt agricultural growth in our country, will hurt small industry, will hurt all those people who are in the informal sector of the economy. And my own feeling is that the national income, that is the GDP, can decline by about 2 percent as a result of what has been done. This is an underestimate.”

Many economists feel that black money is a consequence and not a cause of corruption. Merely demonetising high value notes will not eliminate corruption. The fact that raids in the past 50 days have yielded large volumes of new currency show that money laundering continues.

The next step should be to target benami holders and real estate builders as well as hawala operators. Last but not the least, the campaign against black money will not be complete without addressing the much-needed poll reforms. After all, black money generation comes from election funding. There have been many reports which have pushed for these reforms. The Inderjit Gupta Committee had endorsed partial state funding but only for national and state parties.

The Second Administrative Reforms Commission in 2008 also recommended partial funding. The Law Commission’s 2015 report supported providing subsidies in kind and even amending the Act. The remedy lies in compelling political parties to be transparent about their donations. Within a week of demonetisation, Chief Election Commissioner Nasim Zaidi wrote to the government calling for electoral reforms. The ultimate aim should be to move towards state funding of elections. Modi has been talking of simultaneous elections to the Lok Sabha and state assemblies in order to cut costs and curb the use of black money, but it needs political consensus.

People have, by and large, shown remarkable patience. While they may be angry at the poor implementation, they are not yet ready to criticise Modi. The fact that the opposition has so far been unable to successfully mobilise public opinion against this move is proof that either Modi did his homework well, or he is riding a tiger. The first acid test will be the assembly elections.

Lead picture: (L-R) PM Modi has gained personally as the demonetisation move has projected him as a decisive and strong leader; the people, despite all woes, are not yet ready to criticise Modi. Photos: UNI